The Wine of Angels, by Phil Rickman 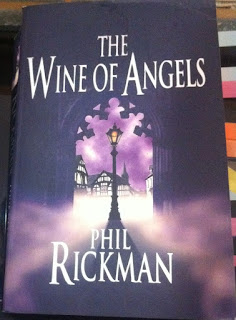 "It was the depressing side of country life; they all seemed to know their Pattern and the Pattern didn't change."  -- 326

This old 1999 copy has been with me through several  moves (along with many of the other books in this series), and has sat quietly on its shelf since the last move eleven years ago.  Recently, though, The Wine of Angels came up in an online group discussion and I figured it was time to brush off the accumulated dust and give it another read.  It's also in keeping with the season -- not just Fall, mind you, but that spooky time of year leading up to Halloween.  Not that this book is overpowered by what I call the woo-woo factor, but there are plenty of mystical moments that helped me decide to read it as part of the Halloween book list. It is set in a small British village, but there's nothing at all cozy about this one. Other than the secrets that are hidden behind closed village doors, it's about as far from St. Mary Mead as one can get.

Wine of Angels is the series opener featuring Merrily Watkins, who has just received her first real assignment as a newly-ordained Anglican vicar.  While visiting the village of Ledwardine, Herefordshire,  deciding whether or not to "go for it," she arrives just in time to witness a strange ritual under an old apple tree known as "The Apple Tree Man."  It is supposed to be a traditional "wassailing," but one of the villagers (an "incomer," there only about a year and a half)  takes it upon herself to add rifles to the mix, citing a reference in a book about collected folk customs.  One of the long-time villagers contests that decision, saying that since it's not a local tradition, what they're doing may end up causing "offence" to the orchard itself, but rifles are fired anyway and Merrily stands by as one of the men blows off his own head.  If that's not an attention-worthy opening to a novel, I don't know what is.

That event will return to the story later, but in the meantime, the struggle between modern and traditional takes center stage in this mystery.  Merrily ends up accepting the job in Ledwardine, but not everyone is happy about her presence there.  Her male predecessor had been there for decades, so it's not surprising that some of the villagers would be unhappy about her appointment.  But that's not the worst of it -- it seems that there is to be a Ledwardine cider festival, and one of the residents decides he's going to put on a play to solve the mystery of the centuries-old death of a local vicar, Wil Williams, who was accused of practicing witchcraft.  There are some in the village who do not want things to come out in the open, and Merrily gets stuck in the middle of a growing controversy.  In the meantime, perhaps the incomers should have paid more attention to Lucy Devenish and her warning about causing "offence" to the orchard, especially when a local girl goes missing after last being seen there.

Since The Wine of Angels is the first in a series, the author spends a lot of time on the people who live in Ledwardine, most especially  Merrily and her fifteen year-old daughter Jane. And while there is a lot going on in the mystical sphere here, in his review at  The Agony Column  Rick Kleffel  notes that  the interaction between  Jane and Merrily  "grounds the novel in the real world," and I'd say that's a perfect way to describe it:  not only does Merrily have to concern herself with the doubts involved in her own belief, the antagonism of some of the villagers toward her position, and a recurrent nightmare that adds to her stress, but she also worries about Jane, who is trying to find her own way after yet another move in her life.   And, like most mystery novels that are set in small villages, there are secrets that remain hidden until something forces them to float to the surface, which happens more than once in this book, leading to as Kleffel says, a story with "layers" that are peeled away to uncover "something more mysterious."

It's fun, it's intelligent, and it's not just another point A to point B mystery story with a tired plot that's been done over and over again; combined with the people in this book  and the struggle between modernity and tradition, The Wine of Angels  makes for a very, very good read.  I'd forgotten just how much I enjoyed this novel and I went scurrying back to the shelf to grab the next one, Midwinter of the Spirit for more.  Recommended, for sure.