The Man From the Train: The Solving of a Century-Old Serial Killer Mystery, by Bill James and Rachel McCarthy James 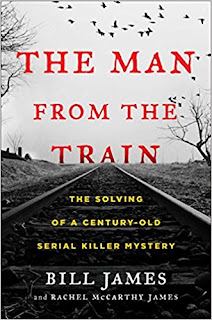 It's very rare that I choose to sit down and read a true-crime account, since it's not my really my thing, so the topic has to be something that piques my interest enough to get me to take a look.  So when I heard about this book last July that involves an axe-wielding serial killer who in the early part of the 20th century  rode the rails and left carnage behind him, that got my attention.  For one thing, this was a case I'd never heard of, and the deal was sealed when I discovered that this all went down over one hundred years ago.

The dustjacket blurb describes this book as a


"compelling, dramatic, and meticulously researched narrative about a century-old series of axe murders across America, and how the authors came to solve them."


Bill James, who says here that in his "day job" he is a "baseball writer," is also the author of another book, Popular Crime: Reflections on the Celebrations of Violence (2012). In a 2016 interview in The New Yorker', when Evan Hughes asked the author about the book he was currently working on, James said the following:


"You know the story of the murders in Villisca? All right, a hundred and four years ago eight people are found dead, murdered with an axe, inside this locked house, in a quiet, small town in the southern part of Iowa. It's a famous crime, and the reason that it became famous is that at the time it was obvious that it was the latest in a series of similar attacks. I had the idea that I'll bet there are others like this which have not been tied to the same murderer, because at the time they didn't have the methods you have now to connect the dots between unrelated events. So I started looking for them, and I found several."

James hired his daughter Rachel as research assistant and this book is the result of their work.  As James writes in the preface,


"With modern computers, we can search tens of thousands and hundreds of thousands of small-town newpapers, looking for reports of similar events."

And not only did he find them, but he also claims that they even discovered the culprit, the true identity behind person they label as "The Man From the Train."  It's a great premise, to be sure; on the flip side, though, rather than being the "compelling" or "dramatic" book promised by the dustjacket blurb, this has to have been one of the most frustrating, amateurish and utterly confusing true-crime accounts I've ever read.

There are no footnotes or endnotes;  there is no bibliography, and he handles the lack thereof in the acknowledgements section where he says that "it is inadequate to acknowledge in a footnote those whose work you use," and that he feels that "sources should be directly acknowledged in the text." He says that he "tried to do this throughout the book," but that's not always the case. While he does mention things said in old newspaper accounts here and there, and quotes one or two of his sources once in a while, for the most part, there are several places where I found myself while taking notes writing "Source???"  or "Citation?" especially when it came to things like statistics he gives, or phrases that start with "It has been written." In putting together a work involving historical research, the lack of sources is not just astounding, but downright appalling.

Another major issue here is that the author makes assumptions about the killer that have absolutely no factual basis; not only that, but then after he's made one statement, he contradicts himself later.  One huge example of an assumption about the killer is that the author believes that the Man From The Train "likely" lived and worked near Marianna Florida between 1901 and 1903, and then doesn't say why. There is no elaboration on the topic, and frankly, I was flabbergasted.   Another example  of his kind of waffly logic  is found on page 310 where the author is going through a list of "let's say for the sake of argument," about whether or not the killer "stalked" his victims.  There, in a brief paragraph about a murder which happened in Maine in 1901, he states the following:


"The murder of the Allen family in Maine in 1901 is him, but that this was an unplanned event that resulted from an eruption of anger on the murderer's part, when Mr. Allen insulted the murderer and drove him forcefully away from his door.

There is no evidence given anywhere that this scene occurred,  and back on page 226 he implies that one of four factors that "strongly suggest" this murder was the work from The Man From the Train was "the presence of Carrie Allen" (the daughter) since Mr. James claims that many of the murders were based on the killer's "perversion" or his penchant for young girls.  Then, on page 228, he says


"But it may not have been Carrie; it may also be that he knocked on the door and asked for a drink of water, and Wesley Allen came out at him in a bad temper, and told him to get on down the road and be quick about it."

Note the "it may also be" here as opposed to what he says on page 310.  And then he reflects on an episode of Dexter for his statement that The Man From the Train "particularly hated large men who tried to push him around," again, a statement that has absolutely no factual basis.  In fact, the entire book is filled with scenarios like this -- guesswork, lots of probablys, maybes, "it may be thats."   My point is that when you have a whole book filled with speculation it's kind of hard to take anything seriously.

Then there's the pattern that the author has established that is supposed to convince us that these murders are the work of the same man and that they go back further than anyone who's already written about the links between these axe murders has discovered. Admittedly, there do seem to be similarities and these were already noted in 1911; however, when a murder doesn't fit the pattern, the author still finds a reason that it should.  As just one example when he tries to justify including a murder in North Carolina in 1906 when the pattern the author has established here doesn't quite fit, in this case a murder where potential victims were left alive  (301), he says that the killer "heard a train coming."  Not "may have heard a train coming," or "probably heard a train coming," but "heard a train coming" and therefore decided to catch it, implying that he was in a hurry to leave.  There's no evidence for this at all unless Mr. James has a timetable of trains running through that section of North Carolina on that particular day, which he doesn't.    This sort of things occurs more than once; not only that, but he takes us through several murders that have nothing at all to do with the case  that could have been left out all together.  By the end of Section IV (330),  Mr. James notes that so far,  121 murders "have been discussed in this book."  And while the research is impressive, what's frustrating is that after he's taken us through these 121 cases,  he says that while "the authors do not believe that all 121 murders were committed by the same man,"  they do believe that a "substantial number" can be attributed to him; that gets narrowed down on page 336 to "  "perhaps fourteen crimes about which we have enough information to be certain they were committed by the same man."  So why write about all 121 and not focus just on the fourteen? That makes no sense at all and fills the book with a lot of unnecessary details and way more conjecture than fact.

Honestly, it's enough to make your head spin and I haven't even touched on the writing style which absolutely grates.

This book is actually getting some really great reviews and high ratings, but not from me. I will say that I was impressed with how he pointed out several instances where the police or other members of the justice community were too quick to arrest or judge suspects based on race, opportunity or other factors --  that was done very well.  I also found the subject matter intriguing especially because I'd never heard of any of these murders, but as one of "today's modern readers," a phrase he uses throughout the book, speculation, guesswork, and a lot of "maybes" just aren't enough to make this a convincing story.  It's sad, really, because I had been looking forward to it for months.