* and another.... The Mystery of a Hansom Cab, by Fergus Hume 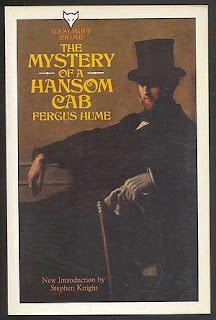 "...life is a chessboard, after all, and we are the puppets of Fate."

In his Washington Post review of this book, critic Michael Dirda asks why The Mystery of a Hansom Cab was so successful, and goes on to say the following:


"I think because it's the detective story equivalent of the kitchen sink,"

and really, I can't think of a better way to describe this book.

According to Stephen Knight in his Towards Sherlock Holmes,  once Hume had decided to try his luck at publishing fiction, he went to a Melbourne bookseller and asked what "style of book he sold the most of."  He learned that "the detective stories of Gaboriau" were extremely popular. After buying "all  his works" and reading them "carefully," he started his book in 1885.  Lucy Sussex reveals in her book Blockbuster!: Fergus Hume & The Mystery of a Hansom Cab that Hume's idea, as noted in his preface, came to him while riding in a hansom cab "while driving at a late hour to St. Kilda, a suburb of Melbourne." (85)  He revealed to friends that not only was he writing a book, but more importantly, and one part of this "kitchen sink" mix, Hume also noted that he was "going to put on the local colour with a spade." (89)  In fact, the first British edition had been advertised as "a startling and realistic story of Melbourne social life," which really does come shining through this book, not just in terms of the upper classes but also moving through level after level downward into the lives of the denizens occupying the city's underworld.

The story itself is a mix of crime, investigations, courtroom drama, melodrama, and elements of sensation fiction, complete with dark secrets from the past.  The novel begins with a report from the Argus on "Saturday, the 28th of July, 18--"  telling its readers of an "extraordinary murder" that occurred in a most unlikely place -- a hansom cab:


"...committed by an unknown assassin, within a short distance of the principal streets of this great city, ... surrounded by an impenetrable mystery.  Indeed, from the nature of the crime itself, the place where it was committed, and the fact that the assassin has escaped without leaving a trace behind him, it would seem as though the case itself had been taken bodily out of one of Gaboriau's novels, and that his famous detective Lecoq would only be able to unravel it."

Gorby, the detective working on the case, follows a series of clues that lead to the arrest of one of society's own.  While he claims his innocence, the man refuses to disclose any information that might provide him with an alibi, and at first, even refuses to "engage a lawyer," because

The secret that the accused is holding close to his chest will become a major focus of this story, and will lead the reader through the streets of Melbourne from the gentility of the city's gentlemen's clubs down into its  darker dens of vice. It also belies the idea that the upper classes, these pillars of society,  are immune to corruptibility; how that plays out I'll leave for others to discover.  And while we're busy wondering what exactly is the nature of this secret and why a man is willing to risk his own life for it,  another detective, Kislip,  is added to the mix, this time working for the attorney of the accused.  In fact, as Sussex mentions in her book, there is not just one or two detectives at work, but "the investigating is shared," among several of the characters in this book. 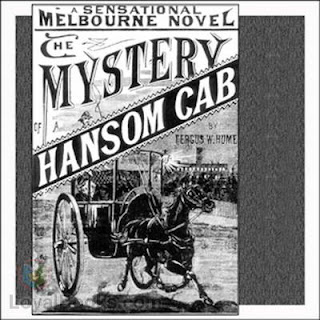 The Mystery of a Hansom Cab is fun but at the same time delivers strong commentary and criticism on society of the time, which is, I think,  one of the reasons I enjoyed it so much.  And then, of course, there is the mystery of the whodunit, which I didn't guess, and Hume's incredible attention to detail in writing this case which kept me guessing every step of the way.   Add to that the elements of sensation fiction (which I love) and the characterizations (the landladies cracked me up);  putting aside the melodrama, it all made for a couple of days of reading pleasure. 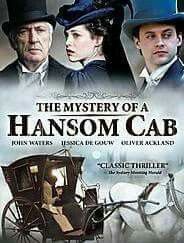 I liked it so much, in fact, that I bought the DVD of the tv adaptation made in Australia.  That I didn't care for as much as I did the book, since for some reason, whoever put it together got the strange idea of giving away tiny pieces of the secret in flashback form here and there.  I mean, I'd just read the book and knew the secret but I couldn't understand why the powers that be couldn't have just let things play out the way Hume had intended.  Had I watched this dvd only, without ever having read the novel, I would have figured things out way earlier than I should have; to be perfectly blunt, I would have also been pissed off.   On the other hand, I love seeing books I've just read played out on the screen, and other than what I see as the major flaw here of practically dumping the unknown right into your lap, I did get caught up in the story and the ending left me with a bit of a lump in the throat.  Positively swoonworthy it was, for sure.