*...and diving into the 1880s: Devlin the Barber, by Benjamin Leopold Farjeon 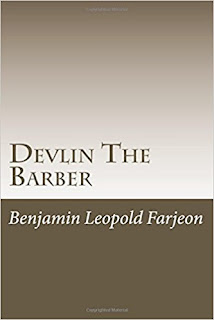 
"...the ends of justice are sometimes reached by roads we cannot see."

and now, for something completely different...

I first heard of this book while looking at the website of the Lilly Library at Indiana called The First Hundred Years of Detective Fiction. 1841-1941, and bought it back in January of this year while I was plotting out what I might be reading over the next twelve months. I had no idea what I was getting into at the time, and I must say that it took me completely by surprise. Eye-opening surprise.

Benjamin Leopold Farjeon (1838-1903) was a prolific British author who wrote his first novel, The Life and Adventures of Christopher Cogleton (1862-1863) after leaving the gold fields of Australia and New Zealand and taking on a job as journalist for The Otago Daily Times.  [In the spirit of purely historical interest, according to the Oxford Dictionary of National Biography, that particular novel was the first book ever "printed, published, and bound in New Zealand."]  Father of famed children's writer Eleanor Farjeon and mystery novelist Joseph Jefferson Farjeon, Benjamin  also dabbled in "sensation mystery novels," for example his Great Porter Square of 1885 and his The Mystery of M. Felix of 1890, with Devlin the Barber falling between those two in 1888.   It was in 1888 that the series of Jack the Ripper murders began, and from what I can see, the timing of Devlin the Barber was no coincidence. 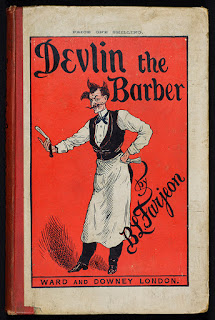 And yet, the focus here is not so much on the actual crime itself, but rather on the titular character Devlin, who rents a room at the home of Mr. and Mrs. Lemon.  The fact that Devlin is a lodger might bring to mind the spectacular novel The Lodger written in 1913 by Marie Belloc Lowndes,  but trust me, outside of the Ripper connection,  the two books are as different as can be.  It all begins when a Mr. Melladew discovers in the newspaper that his daughter Lizzie had been the victim of a "Horrible Murder in Victoria Park!," which comes as a shock because he'd seen her just the night before when kissing her goodnight.  Adding to his misery, he also discovers that her twin sister Mary has vanished with no clue as to her whereabouts.  Portland, the girls' uncle, newly-arrived from Australia, puts forth a proposition to our narrator, offering him a thousand pounds to discover who killed Lizzie and another thousand if he brings Mary home safe.  Having just recently been laid off, the money is sorely needed, but where to begin?   As fate would have it, a letter arrives from a much-loved former servant from his parents' home, a Mrs. Lemon, entreating him to come to her house.  Answering her summons, he discovers that she wants to talk about her lodger, Mr. Devlin, and oh what a bizarre, strange tale it turns out to be!   If  you will  forgive the cliché,  the story revealed by Mrs. Lemon held me completely spellbound to the point where upon returning to the hunt for Lizzie's murderer I almost didn't care about that part of the story any more.

Devlin the Barber is a real treasure, not so much in terms of the crime aspect, but because it is so vastly different from all of the old crime/mystery/detective novels from the 19th century I've read to this point.  Really, outside of the murder mystery, the draw is Devlin himself, especially as seen through the eyes of his landlady.  Farjeon must have had a right jolly old time writing this novel, and I had a right jolly old time reading it.  I'm not going to discuss particulars here, but I'll just say that it would probably be much more fitting to post about this novel in the dark fiction section of my reading journal.  It's also a much easier book to get through than the others read so far with far less melodrama, narrative that flows much more smoothly -- in short, it's much more reader friendly.

It is a book so far out of the ordinary that it begs to be read.  I absolutely loved it.