*back we go again -- The Club of Queer Trades by G.K. Chesterton 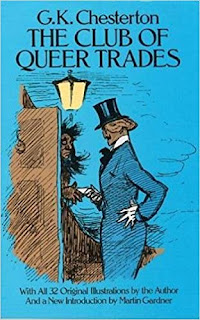 Whew! I see that my last visit here was on April 14th; in the meantime I've been to Seattle, then home for a brief visit before moving on to South Carolina for just under a week.   Home now, and back to reading and I'm a happy camper.

I actually finished The Club of Queer Trades some time ago but I gave it a quick reread last night just to refresh my memory.  Arthur Conan Doyle's The Return of Sherlock Holmes was published the same year as this book,  combining several stories published between 1903 and 1904  following a huge backlash from readers when he killed off his great detective in 1893.  I mention this because in Club of Queer Trades, Chesterton takes to the familiar Holmes and Watson-ish format to tell his own tales, following the adventures of detective Rupert Grant and Swinburne, the narrator of these tales, who is often dragged into Rupert's adventures.  And then, there's Rupert's  brother Basil who generally comes up with the real solution to Rupert's cases.   The thing is that, when all is said and done, Chesterton has given us much more of a detective-story parody here, but it's parody with a purpose.

There are six stories in this collection, and while I'm not going to delve into each of them individually, they all connect to The Club of Queer Trades itself:


"It is an eccentric and Bohemian Club, of which the absolute condition of membership lies in this, that the candidate must have invented the method by which he earns his living."

The rules say that the trade involved must be "entirely new," that it can't be an "application or variation of an existing trade." It must also be "a genuine commercial source of income," from which the member gains his livelihood.  And right from the very beginning of this book we know that we're in for some snarky and satirical observations about society in general, as Chesterton describes people who might pass by the building in which it's housed as the sort who wouldn't even be curious enough to take a look or ask what it's all about, as if


"the Thugs set up a Strangers' Assassination Company in one of the great buildings in Norfolk Street, and sent in a mild man in spectacles to answer inquiries, no inquiries would be made."

Exactly what oddball trades are involved in the Club I won't say, since a) they have to do with the short cases in this book and b) half the fun is in figuring out exactly what each might be as you're reading each story and once you get the pattern of these tales down in your head.

What I will say is that as far as the actual detection that happens in this book, there are some clever conundrums to be found here.  My favorite is the "Awful Reason of the Vicar's Visit," which not only presents a clever little mystery but also made me laugh out loud.  And as far as the actual detective who is "solving" these cases,  Rupert takes himself quite seriously, but he has a habit of  never being  right in his deductions and ends up deferring to Basil who has a way of seeing exactly what's going on in each situation.   The law, morality, and society itself all come under scrutiny here, and what seems to be a lot of silliness actually has some serious purpose when all is said and done.  The trick is that you have to get to the end of the book before actually discovering what that purpose really is.

While it turned out to be anything but what I thought it might be, The Club of Queer Trades is actually a delightful and entertaining book.  People who enjoy Chesterton's Father Brown mysteries (not the later TV versions but the short stories themselves) will find that same sense of understanding of human nature in this book but this one makes for a completely different sort of reading experience.  It won't be for everyone, but it suited me just fine.
Posted by NancyO at 10:18 AM