*The Man in Lower Ten, by Mary Roberts Rinehart 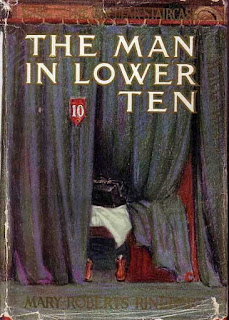 First edition indeed! Sadly it's pretty banged up, minus the dustjacket, and it has a library stamp in the front, but what the heck -- it still has that lovely onionskin (intact) paper covering the full-color illustration for the beautiful frontispiece done by Howard Chandler Christy, whose illustrations appear throughout the novel.

While The Circular Staircase is her first published novel (1908),   Jan Cohn, the author of  Improbable Fiction: the Life of Mary Roberts Rinehart (1980) tells us that The Man in Lower Ten is Mary Roberts Rinehart's first work of "book-length fiction."  She wrote it in 1905, and in 1906 it had been accepted for serialization in All-Story Magazine.   Considering she'd been writing short stories for just about a year and a half, as Cohn says, "Somehow in that frantic apprenticeship she had learned all she needed to know."  (35) For the serialized version of this work, Rinehart earned $400, her highest-paying story to that time.  Following the publication of The Circular Staircase, The Man in Lower Ten was published as a novel, and it was so popular that it ended up on the 1909 bestseller list (thank you, Project Gutenberg).  According to Simon and Schuster, The Man in Lower Ten was actually "the first detective novel to appear on national bestseller lists."

The Man in Lower Ten  blends mystery, humor, dark atmospheric moments and romance in the telling and ends up being a satisfying read, meaning I never guessed the "who" at any point in time although my inner armchair-detective self made several attempts.  In this story, a young attorney named Lawrence Blakely recounts the "queer freak of the demons of chance" that set him off on the "most remarkable period" of his life.   It all starts when his partner and long-time friend Richey McKnight begs off the procurement of some very important papers having to do with an important court case, and asks Blakely if he wouldn't do it for him.  Blakely agrees, goes to Pittsburg (sic), takes a deposition, picks up the papers, and is on the return journey home when this story begins in earnest.  Blakely's ticket puts in him berth Lower Ten, car seven of the train, and by the time he's ready to go to sleep, he makes his way there for a good night's rest.  Imagine his surprise when he finds another man laying on his bed, sleeping soundly.  The porter agrees to let him use berth Lower Nine; by this time though, Blakely isn't at all tired and gets up to wander around before returning to his bed.  But there's yet another surprise for our hero -- his things are missing and he's found himself in Berth Lower Seven. But that's just the beginning, as the porter makes his way to Lower Ten and discovers that the formerly-sleeping occupant is now dead.  If that's not bad enough, all of the evidence points directly to Blakely, who probably would have been arrested at the next stop, had there been one, but a deadly train wreck intervenes.  Surviving the crash, Blakely must find a way not only to clear his name, but also to discover the real killer before the police have the chance to slap the cuffs on him. 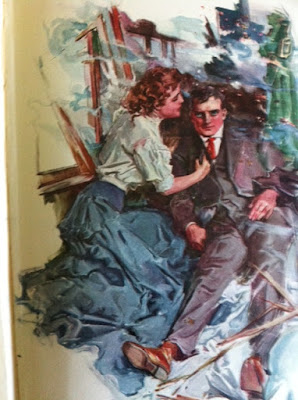 after the train wreck:
one of Christy's illustrations, between pp. 80 and 81
my photo

As I said, one of the elements found in this story is humor, and aside from the wisecrack remarks made by Blakely throughout the novel, she gives us a detective character who wryly pokes fun at Poe, Conan-Doyle and Emile Gaboriau.  Hotchkiss by name, he is on the train doing a bit of sleuthing after the murder. He introduces himself to Blakely, telling him that he uses


"the inductive method originated by Poe and followed since with such success by Conan Doyle. Have you ever read Gaboriau? Ah, you have missed a treat indeed."

Even after the train wreck, he follows Blakely where ever he goes, always taking notes, and later thinking he has his man, announces that "It's a great day for modern detective methods." He turns out be wrong, but it's a great bit of tongue-in-cheek irony.

My personal favorite of Rinehart's books is The Album (1933) which I read as a kid and never, ever forgot because of the whole axe-murderer thing and the mystery leading up to the identity of the killer.  Since then I've probably read it about three times.    While I didn't find The Man in Lower Ten to be nearly as exciting and polished as that one (which is no surprise given it's her earliest book-length work), it was still a lot of fun.  The romance isn't too in your face, although I must say that Blakely spends a lot of time worrying about how to shield the reputation of the woman in the case -- how very Victorian we still are after the turn of the century here in America!   I also noticed right away that there are several places where we see this country on the edge between old and modern, for instance, in the use of automobiles vs. horse carts and hansom cabs.  One word of warning -- in 1905 our modern sensibilities about race were, of course, not in play, and I did get a bit of a jolt coming across words like "darky" and "Jap."

All in all, it's a fun read, and had this been my first introduction to Rinehart's work, I'd probably go on to read more.  As it is, I've read several of her books so in my opinion, while the stories may seem a bit thin to modern readers, she's an American mystery novelist worth exploring.