going back to what I love reading and jumping right into the '20s: The Unclaimed Letter by Anna McClure Sholl

I have been the queen of sporadic posting lately due to stuff at home but hopefully I can get on with journaling my crime reading at the usual pace once again.

It's no secret that I love reading old books, especially if they're written by authors who have tended to fade into obscurity.  Anna McClure Sholl is one of these; in fact, she's so obscure that trying to find any information about her other than her birth and death dates (1868 - 1956) is incredibly difficult.  I know she was a painter as well as an author, that she was born in Pennsylvania and attended Cornell University, from which she graduated in 1895.   There is a brief blurb about her at Wikisource: "Woman's Who's Who of America, 1914-1915 which reads as follows:

She also used the pseudonym Margaret Carpenter in some of her many short stories, and her work has been published in  Harper's, Munsey's and a host of other periodicals.   I did find a photo of her at the website of The Museum of the City of New York in which she is at a dinner to honor Mark Twain's 70th birthday at Delmonico's in 1905; the problem is that even though the participants are listed, I'm not quite sure which woman is Sholl.

From there, she remains a mystery to me; if anyone has any info he/she would care to share, I would be appreciative.

One book not mentioned in the above "Who's Who" blurb is her The Unclaimed Letter, published in 1921. 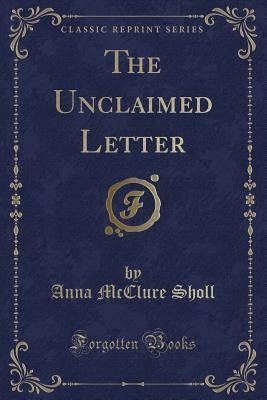 My edition is from Forgotten Books (2018, 9781527638426), with yet another unexciting cover, but I will say that a) the spines all look great together on the shelves and b) I appreciate that Forgotten Books keeps publishing these old tomes.  (For those of you who don't do physical books, The Unclaimed Letter  is also available online for free.) The publication info page offers two copyrights, one from Crowell Publishing Company and one from Dorrance and Company.  [As an interesting aside, Crowell Publishing Company was incorporated in 1920, changing its name in 1939 to Crowell-Collier.  In 1965 it changed again to Crowell, Collier & Macmillan, ultimately becoming the Macmillan Publishers we all know today. ]

In a story where whodunit blends with pulpy revenge tale, Frederick Dewitt has been ordered to take some time away "for his health," and he decides to spend it at his "old haunt" in the mountains of East Burleigh in Ulster County New York.  As we first meet Dewitt, he's striking up a conversation with the local postmistress, Miss Almira, who's been holding on to a "sinister letter"  that had arrived.  She's actually been saving it so that he would take a look at it, because it's making her nervous.  It is addressed to "the person who committed the Murder at the The old Bostwick Farm,"  which turns out to be the property of Miss Almira's uncle, Abraham Bostwick.  Uncle Abraham's been dead five years, and it's been shut up ever since his death. It's been on the market with no takers, "situation's too lonesome; ground too rocky," and it comes with a legend about a young woman who'd been killed there who continues to cry and walk the house for years.  Neither feels good about opening the letter, but  Dewitt is intrigued, and decides to check things out.   After obtaining a key to the old place and making his way there on foot, he is surprised to see the face of a woman through a window.  At first the old legend pops into his head, but she is very real, claiming to have become lost on her way to where she's actually staying, a house built some one thousand feet above the farm.  Dewitt is instantly smitten and offers to go back into the village and get a car to drive her there, but when he returns, she's gone.  Instead, he meets a man by the name of Ramah Tong, who happens to be the now-disappeared woman's Indian servant, and learns of an "accident" that had happened two days earlier, when a man by the name of Martin Carfax just happened to lean over a cliff and fell into a deep quarry.  Because the accident had happened on April 1, when Tong had gone to seek help the owner of the land containing the quarry had thought Tong was wearing some sort of costume and that he was trying to pull a fast one, and didn't bother to take a look. Dewitt organizes a rescue mission and the body is found.  Eventually a witness comes forward to reveal that it was no accident, and Dewitt finds himself investigating a murder involving his mystery woman, who turns out to be the newly-widowed Christine Carfax (whose husband died on their wedding day), and her former lover Gordon Brent, who not only swears he's innocent but that he has an alibi. As Dewitt begins nosing around, things get even stranger and the body count starts to multiply.

While I'm happy to have read this obscure book  (the more the merrier for me),  from a reader standpoint it's one of the most seriously convoluted mysteries I've ever experienced.   While it starts out as a definite whodunit, it actually has much more of that sort of vibe associated with old pulpy mysteries, where the whys of the crime go back in time.  As a whodunit, it didn't exactly work for me, but I did have fun with the clues that the author threw in that put it more into the zone of the strange, including a mysterious "brotherhood,"  "Buddhist rosary beads," sinister-looking East Indians, and the questions that crop up dealing with astral projection and  "wireless photography" in which someone's dream just might turn into a photo that becomes imprinted on other people's consciousness.  However,  as much as I love reading old pulpy mysteries, a little reining in on the author's part wouldn't have gone amiss here; while The Unclaimed Letter  had its  enjoyable moments,  I found myself mentally willing the story to move on when it started to get bogged down, which was more than a few times.  I won't even mention the flaws in the plot itself, leaving them for others to discover, but trust me, they're there, along with the element of romance.  Still, the point is to discover and read these long-forgotten books and authors, something that brings me joy in the long run, so I can't really complain too much.

The Unclaimed Letter is probably best suited for readers who, like myself, are into discovering books that have disappeared into the void of obscurity; it does require a bit of patience but the upside is that this is not your average mystery story, something I genuinely appreciate.