"There the monster lies..." Master of the Day of Judgment, by Leo Perutz 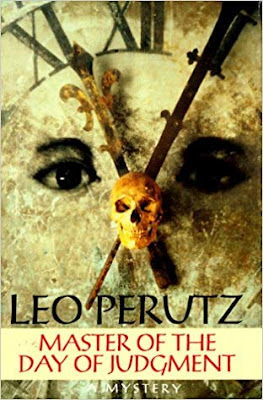 "Human vileness remains, and that's the most lethal of all lethal weapons."


I am a bit hesitant in terms of posting  about this book as a crime novel -- it actually sort of defies genre when all is said and done, moving into its own literary territory.  While there are a number of mysteries to be found here,  the author has something quite different in mind as the central focus of this story.   Master of the Day of Judgment is most brilliantly constructed, so much so that as that last page is turned,  you may more than likely find your sense of what is real and what is not being thrown completely off kilter, causing you to go back to the beginning and to read it through a second time.  And when you've finished it that second time, the nature of the title comes into focus more clearly as it dawns on you what the author meant here.

It is at the beginning, the "Foreword instead of a Postscript" that we are introduced to our narrator.  Gottfried Adalbert Baron von Yosch explains that he has just finished chronicling the "whole sequence of tragic events" which had occurred over a certain five-day period in September, 1909, "everything that I wanted to forget and cannot."   He makes a point of revealing that as he wrote, his memory had "distinctly and vividly preserved a mass of detail"  including "trivial" bits of conversation, what was going through his mind at the time, and "minor events of the day." He especially remembers what arrived in the mail on 26 September, a day that "stands out clearly" in his mind for reasons we don't yet know, including  things he did the rest of the day, what was in the newspapers, etc.;  everything is so minutely described so that there should not even the slightest hint of doubt that he is trustworthy in the account that is about to unfold.   However,  there's a bit of a hiccup in that vivid memory of his, as he notes that he thought that things had occurred over a period of "several weeks" and then later, he finds himself thinking that it was "inexplicable" that he has moved one particular event to mid October.   Cue red flag, raised eyebrow.

One of the Baron's remembrances of September 26th is a "brief item in small type" about the failure of a bank; while he'd been able to get his money out in time, he realizes that he might have warned his acquaintance actor Eugen Bischoff that he should do the same, but had instead kept silent.  He offers his reasons for keeping mum, adding "Why meddle in other people's affairs?" but again the eyebrow is raised wondering what there is between these two men that caused him not to offer a friendly word of advice.  At this point, in my mind, Baron von Yosch himself has become the first mystery to be solved here, but then he slowly begins to shift the focus away from himself by offering a prelude as to what is about to be unfolded about the "sinister and tragic" five days that began on the 26th.  It seems that he and others ("we"),  found themselves involved in

by following a "trail of blood" leading to the opening of a "gateway to the past."  Even more cryptically, he mentions "the book," and  "that fearful trumpet red" which he hopes that "no human being ever again set eyes on."

From there, the Baron's account launches into the start of those sinister events, beginning with  a small friendly musical concert among friends at the home of Eugen Bischoff,  and ending in the actor's death.  [Just as an aside, this technically isn't a spoiler since it's in the blurb on the back cover of the novel.]     The Baron is invited to play his violin there by a mutual friend of both, Dr. Eduard Ritter von Gorski, who mentions that Bischoff has no idea that the bank has gone under and that he's lost everything, and no one is telling him about it because Bischoff has enough on his plate at the moment without knowing of his financial ruin.  But once there among his friends Bischoff, his wife Dina, her brother Felix and a newcomer named Solgrub, the Baron casually asks Bischoff if he's seen the morning paper, which he knew they'd hidden from him, drawing disgust from the others at the gathering.   A bit later, Bischoff leaves their company; the Baron goes out for a walk in the garden where he meets up with Dina on his way back, and as they're talking,  the entire household hears Bischoff scream the Baron's name.  As they're wondering what's happening, the sound of two gunshots follows immediately afterward; von Yosch leaves Dina and makes his way to the garden pavilion where he discovers that Bischoff has been shot.  By now, everyone except Dina has arrived, in time to see the dying man throw the Baron a "grimace of blazing hatred."    Suspicion immediately falls on the Baron due to a "silent witness" found at the scene; although clearly a suicide,  Felix speculates that Yosch drove him to it, a feeling shared by everyone present except the newcomer Solgrub, who believes the Baron's claims of innocence in the matter and his oath made on his honor.  He realizes that  Bischoff's suicide makes no sense and that there is something seriously wrong here; he reasons that if he can come to understand exactly why the actor took his own life, then he may be able to prove that the Baron was not behind it and sets out to investigate.  The trouble is that the Baron doesn't have much time since Felix holds the threat of exposure over his head, so he decides to do some investigating on his own.

All of the above is just the beginning of  more yet to come that will move this story from the mystery behind Bischoff's suicide  into another realm entirely, as the Baron's narrative reveals how it is that the players move onto that "trail of blood" to find the "gateway to the past" alluded to earlier.   As the story begins to shift yet again, it becomes obvious that  Perutz hasn't quite finished with his readers -- there are even more surprises to come.

Reading this book as a conventional mystery story just isn't right.   Master of the Day of Judgment  also appears on Karl Edward Wagner's list of thirteen best non-supernatural horror novels, but it's not exactly horror story either.  In fact, I'm finding it a bit difficult to attach a genre label to it since, as the blurb notes, it blends "suspense and the fantastic," but in the long run becomes something completely different.   It's one of those book that tends to mess with your head and delightedly so; I love challenging, reality-questioning novels like this one. Not for everyone, for sure, but I had a great time with this story.   Then again, I also loved Perutz's Saint Peter's Snow (which is even more hallucinatory and mind-boggling than this one) so I'm not surprised.