back to the 20s and my happy place again: Inspector French's Greatest Case, by Freeman Wills Crofts 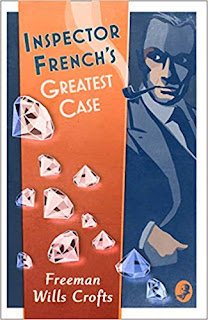 With the sun beginning to set earlier now, there is nothing like curling up with a good cup of tea and a mystery that  delivers a bit of a one-two punch of a twist before all is said and done.  The hero of the day is Inspector Joseph French, referred to (behind his back, of course) by his colleagues at the Yard as "Soapy Joe," a moniker based on his reputation as being "quite a good fellow at heart."   In an introduction to this particular edition in which we "Meet Chief-Inspector French" written by the author in 1935 (and also found here at Classic Crime Fiction) we also learn that "Politeness is an obsession with him," and that


"He's decent and he's as kindly as his job will allow.  He believes that if you treat people decently -- you'll be able to get more out of them; and he acts on his belief."

As far as this particular case being his "greatest," well, I'll admit that I have no clue there, since there will be twenty-nine more cases for the Inspector to solve, the last published in 1957.  In this book, the series opener and the first French mystery I've read, he is brought in to solve the case of a murder of a Mr. Gething, the head clerk of diamond merchants Duke and Peabody.  The firm's safe is open, "three-and-thirty thousand pounds" worth of diamonds are gone, along with a thousand pounds in notes.  Despite a number of clues and a number of suspects, the case is anything but open and shut, and "days slipped by" without any progress, causing the Inspector no end of frustration.  It is a bafflement that will continue to dog French as the case takes him on a series of travels beginning in Switzerland, leading him eventually to a ship on its way to Brazil; he always seems to be close but at each step, just as he feels he's getting somewhere, he hits the proverbial wall as events transpire to put barriers between himself and a solution.


In Crofts' introduction he states that


"Anyone about to perpetrate a detective novel must first decide whether his detective is to be brilliant and a 'character' or a mere ordinary humdrum personality."

Speaking of "humdrum," in 1972, Julian Symons would write in his Bloody Murder: From the Detective Story to the Crime Novel that Crofts was


"not just a typical, but also the best, representative of what may be called the Humdrum school of detective novelists..."

of whom "most came late to writing fiction, and few had much talent for it."   His feeling was that they


"had some skill in constructing puzzles, nothing more, and ironically they fulfilled much better than Van Dine and his dictum that the detective story properly belonged in the category of riddles and crossword puzzles."  (118)

As Curt Evans explains in his book Masters of the "Humdrum"Mystery,   Symons was referring to a group of writers who "placed far greater emphasis on puzzle construction and adherence to fair play detection than on characterization and stylish writing," which he notes is "fair enough."   However,  Evans also notes that in his view, "Symons insufficiently values the great technical sophistication of the plots in the best works of these authors,"  and that


"this school of mystery fiction has been unjustly disparaged by Julian Symons and the many critics who have adopted his views."  (2012, Location 191).

French may not be the most brilliant detective ever (and Crofts reveals in the introduction that "many people call him dull"), but he never lets go, remains completely methodical and detail oriented throughout, and he is not averse to listening to his wife's flashes of insight when she comes up with an idea that sparks the light bulb over his head that will move him another step along in his investigation.  "Thoroughness and perseverance" are qualities that the author has given his detective, and admittedly, French does not "leap to his conclusions by brilliant intuition."   In short, he's a regular guy, he gets things wrong, and keeps trying until he gets it right.   Personally, I found myself rooting for Inspector French along the way and actually feeling sorry for him as things continued to go wrong.  If you want dazzling detective, you won't find that here; Inspector French's Greatest Case has much more in common with police procedurals and Crofts had obviously spent a great deal of time meticulously plotting each step of this mystery.

As far as the twist, I had actually figured this bit out but it was not too long before French himself did, so the experience was unlike when I read detective novels in which I guess things early on, which is a plus.  And "humdrum" or not, I quite enjoyed Inspector French and I quite enjoyed the book, enough so that  I've been slowly stockpiling these Harper editions so that I can look forward to more of Soapy Joe's cases in the future.