The Honjin Murders, by Seishi Yokomizo 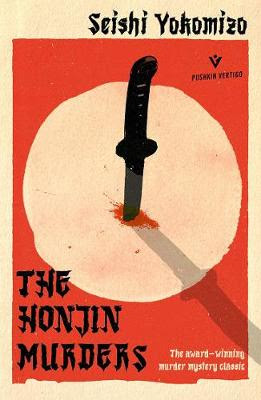 Pushkin Vertigo has done it again, this time with the classic Japanese mystery, The Honjin Murders, the first book to feature Yokomizo's "scruffy-looking" sleuth Kosuke Kindaichi.  Making his debut in 1946, he would go on to solve  a further 76 cases over the next thirty-plus years before his creator's death in 1981.  This edition is the first English translation of Honjin satsujin jiken; his The Inugami Clan has been available in English for some time,  but Pushkin Vertigo will soon be releasing a newer edition of that book with the title The Inugami Curse.

The puzzle set before us in The Honjin Murders  falls under the heading of  locked-room/impossible crime.  I love these books (for the most part; sadly, I've read some pretty bad ones in my time), but for readers who aren't so familiar with what goes on in this sort of thing they can be pretty daunting and even disappointing.   As John Pugmire of Locked Room International notes, they are stories in which the purpose is "purely and simply to baffle while entertaining. It challenges the mind, not the heart or the spirit."  I've often felt that the locked-room/impossible crime really exists in its own sort of universe; although crime fiction it is, the major emphasis seems to be on unraveling the  solution as well as the cleverness of the villain of the piece in its design.   I don't mind that bit at all,  but other mystery readers who may expect major character development or in-depth backstory just might.

The back-cover blurb does a fine job of preparing the reader for what's to come:


"In the winter of 1937, the village of Okamura is abuzz with excitement over the forthcoming Ichiyanagi wedding. But, amid the gossip, there is also a worrying rumor -- it seems a sinister masked man has been asking questions around the village.  Then, on the night of the wedding, the Ichiyanagi household are woken by a terrible scream, followed by the sound of eerie music. Death has come to Okamura, leaving no trace but a bloody samurai sword, thrust into the pristine snow outside the house."

The police arrive on the scene, but while they are busy with scattered clues that make absolutely no sense and following up reports of the arrival in the village of a strange man with three fingers on his hand, the dead woman's uncle has his own ideas about getting this horrific crime solved.


Enter detective Kosuke Kindaichi, whom Uncle Ginzo had met while in San Francisco some years earlier on business.  Kindaichi had left university, finding it "boring," then went to America with "no particular purpose in mind."  He drifted around the country for a while, taking on jobs to support himself, eventually becoming hooked on narcotics.   As the narrator reveals, it was a long-unsolved murder in San Francisco that prevented him from becoming "one of those lost, drug-addicted Japanese immigrants"and turned him into a "hero"  --  Kindaichi solved it when others couldn't, using only "reason and logic in a focused attack on the case."   Returning to Japan, he found his calling and  set up a detective agency. With business somewhat slow at the beginning,  within six months Kindaichi was being honored in the newspapers for his service to the nation by solving a major case.   The question is, can he put his logic and reason together to solve this rather baffling mystery?

As it turns out, the plot was particularly ingenious and actually heinous when all is said and done, offering more than one unexpected twist that kept things lively and kept me guessing.  The first time through I was a bit annoyed when the narrator started pointing out  various items of "significance" as if telling his readers that these are things to pay attention to, or at least to keep in the back of their our minds for later.   And before the mystery is completely explained, he reveals the point in the case in which Kindaichi reaches his "aha" moment, which points the reader to a particular avenue of thought.  Again, I found this a bit annoying, but the truth is that this bit of Kindaichi's later insight (without giving the show away, thank goodness)  took the armchair detective in me in a direction I would never have considered.  I was still wrong, but after the second read I was kicking myself for not having figured it out the first time.

Just one more thing before I finish up here, and that is that it's important to keep in mind when and where this book was written.  While there is not a lot of character development as you read along, there are cultural and social issues that rise to the surface that will become important later down the road.  There is also much to say about the locked-room/impossible crime genre within the story itself, which provides more than just a deft touch to the mysteries at hand, also reading as a bit of an homage to the genre.    My standard practice when reading this sort of thing is to read it twice, the second time to block out the noise of red herrings, etc.  and try to get to the point of  my own "aha" moment.  The story is so nicely plotted that I didn't, even after the second reading when I already knew what had happened.

I hope that The Honjin Murders will gain a following, prompting Pushkin Vertigo to publish more of Yokomizo Seishi's work in the future.  Recommended, certainly for fans of the locked-room mystery, but for readers just testing the waters with this sort of thing, you couldn't go wrong by starting here.