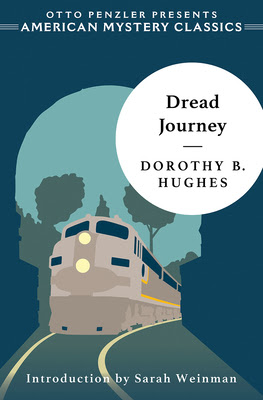 Every once in a while (with mega-apologies for the cliché about to be used), I run into a novel that not only knocks my socks off storywise  but also leaves me confident that for the duration of my reading I am in the hands of a master of the craft.   Dread Journey is one of those, and I have to wholeheartedly agree with Anthony Boucher who said of this book (to quote one of the editorial reviews on Amazon)  that it is "Not to be missed under any circumstances."

Dread Journey is certainly not your average mystery story.  I had an inkling that such was the case on reading the first words of the novel:

The woman who spoke those words hadn't meant to say them out loud, and it isn't too long before we find out a bit more of what's behind her reasoning:


"It wasn't a tremble of fear. It was a dark hood hanging over her head. She was meant to die. That was why she was on the Chief speeding eastward. This was her bier."

Movie actress Katherina (Kitten) Agnew realizes that it doesn't have to be this way, since she has another option open to her.  She could go to the director of the film she is scheduled to star in (also on the train) and "release him of all obligation," and "from the verdict of death."  Vivien Spender would then be free to star his "newest discovery," young Gratia Shawn, as Clavdia Chauchat in his planned movie production of Mann's The Magic Mountain, the role which he had had in mind for Kitten when he'd first discovered her.   The thing is though, that Kitten won't back down.  Knowing what had happened to those who had come before her, the "innumerable Clavdias," encompassing

"The one in a home for alcoholics. The one picked up soliciting. The one who jumped from a window while Viv was in Florida with the new. And the others, returned to the drabness from which they had once hopefully emerged, walled behind counters, playing walk-ons"


she had hired an attorney to draw up an "unbreakable contract for the role."  But Spender wants Gratia, and Kitten knows from past experience with the man that he usually gets what he wants.  Hence the "Dread Journey," and the suspense begins from Kitten's not-meant-to-be-spoken-out-loud comment and is maintained throughout the story to the point where the book becomes absolutely unputdownable.

Had this been the sum total of the novel, it still would have been good, but Hughes puts her characters under serious scrutiny here.   As Sarah Weinman notes in her excellent introduction, the author's use of "omniscient viewpoints," allows the reader to examine

"the characters' inner sancta and excavates their fears, their desires, their jealousies, their dreams with the most exacting literary scalpel."


Along with the building suspense, it is Hughes' ability to get her readers directly inside of her characters' heads that elevates Dread Journey well beyond just another crime/mystery/suspense novel, pushing it well into the literary zone, as she has done with the other books of hers I've read.


As just one of the many characters populating this novel, it is the porter James Cobbett who is the most interesting of them all.    He is a man who "had pride in himself," someone who "didn't consider a man equal to him unless he were equal in dignity and pride."  Given that he is African-American, it's to Hughes' credit that she didn't stoop to the racist stereotypes of her time or those which came before.   Cobbett is a sort of outsider, detached from the action of Kitten, Spender, and the other members of this drama; at the same time after  years of doing this job, he has an incredible understanding of human nature.  He sees himself as "responsible for this car and its tenants," and knew instinctively when "something was wrong."    In one absolutely perfect run of prose that lasts for nearly five pages in Chapter Six, it is through Corbett's observations that we see what's happening as he watches his group of passengers while suffering under an unshakeable "weight of depression," and it is not too far off the mark here to say that when "Something cold touched the root of his spine" as he sat watching,  something cold also touched the root of my own spine.  It is a most chilling five pages that I will  never forget.

I love Hughes' books,  and this one is no exception.   It is all about the writing and her ability to direct us immediately into the minds of her characters here, and on top of all that I've mentioned so far in this post, she has an underlying story about the abuses of power and a look at how things really worked in the Hollywood of her time, which is not at all pretty.  It is also a window on the times, with characters down on their luck and affected by the war.  There is so much happening in this little book that keeps it from being just another crime story, and  I'm delighted that Penzler Publishers has released this new edition of Dread Journey.  Despite the fact that Hughes' books are great, she is still widely unknown, so hopefully people will pick up a copy and discover her writing genius for themselves.    I'd recommend it to Hughes readers who perhaps haven't made their way to this novel or readers who, like me, prefer the more literary side to their reading across genres.

I LOVED this book -- it is pure writing excellence and pure reading pleasure.  I can't ask for more.