The Inugami Clan, by Seishi Yokomizo 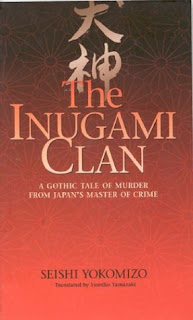 Having finished Yokomizo's The Honjin Murders, I moved right away into his The Inugami Clan -- a) it's the only other novel in this series to have been translated into English and b) I've had this edition sitting on my shelf forever so it was readily accessible.  Pushkin-Vertigo will be releasing another translated edition of this book called The Inugami Curse, available from the UK in February and here in the US in August of this year.

Yokomizo opens his story with a scene that will be familiar to many readers of crime and mystery stories:  in a "labyrinthine" house on the shore of Lake Nasu, an elderly man is in his death bed surrounded by his relatives all waiting for the end.   The man is "the so-called Silk King of Japan" and family patriarch, Sahei Inugami, and while everyone "sat silently, listening to the old man's breathing,"  it doesn't take long before it becomes obvious that they're not actually there out of grief.  It seems that no one in the family has a clue about Sahei's "intentions" toward his "enormous fortune;" and as he moves toward his end,  the impatience  of the the eldest daughter, "unable to restrain herself,"  leads her to ask him bluntly about his "last wishes."  The family attorney, also in attendance, announces that he is in possession of Sahei's will, explaining that its contents cannot be made known until Sahei's grandson Kiyo returns home.  After the war, he was last known to be in Burma, but no one has seen him in some time.    If that fails to happen,  the attorney is authorized to read the will on the one-year anniversary of Sahei's passing.  As the head of the Inugami family silently slips away to his final moment of life, the narrator, looking back,  reveals that it was his death  that "set in motion the blood-soaked series of events that later befell the Inugami Clan."

Some months later, Detective Kosuke Kindaichi arrives in Nasu, summoned by a mysterious letter penned by one of the family attorneys who writes of his fears of "events soaked in blood," and "One family member after another falling victim..."    Kindaichi's arrival coincides with the news that the missing Kiyo Inugami has finally been located and will be returning home,  allowing for the reading of Sahei's will upon his arrival.   The unexpected and explosive contents of this will, as the back-cover blurb notes, will trigger

"a chain of gruesome and bizarre murders as the members of the Inugami family are pit against each other in a desperate contest for his fortune."

At this point, anyone thinking "been there, read that" is sadly mistaken.  While greed is often the underlying motive of many a mystery story,  Yokomizo cleverly adds to the mix long-buried family secrets, gruesome murders that leave even the most experienced policemen baffled and shaking their heads, a certain measure of sleight-of-hand, a unique crime pattern, several grotesque elements that would be perfectly at home in many a Gothic novel, and an unmistakable  pulpy vibe underneath it all.   While there are a number of plot elements that are certainly familiar to regular readers of mystery or crime fiction in this book, it's important to consider that much of what happens here, as in The Honjin Murders, is rooted in the time and postwar cultural vibe surrounding these events.    As an aside, Sari Kawana's Murder Most Modern: Detective Fiction and Japanese Culture is a great resource for regular readers of Japanese mystery novels; it's very helpful, and one I'd recommend for readers wanting more out of these books than simply story.

My issues with this novel were not so much with plot (which I thought was very nicely concocted), but with Yokomizo's penchant for leaning toward the melodramatic and downright cheesy in his word choice/writing style, and then there are his descriptions of certain characters that became repetitive over time to the point where they tended to grate on my inner ear.   All the same, I had great fun with this novel and ended up liking it very much, despite the fact that it was not too difficult to figure out the who behind it all.   While that's an issue in my crime reading most of the time, it bothered me less with this book because it's not just the identity of villain that matters,  since there is so much more going on here. Parts of the plot are seriously demented and even horrific, making it much darker than many Japanese mystery novels I've read, taking it out of the realm of Agatha Christie  (where so many readers have placed it) and into much darker territory, where as a mystery reader I feel most at home.


I would certainly recommend The Inugami Clan to readers who have some familiarity with older Japanese crime novels.  They're sort of in a class unto themselves and take some getting used to, but I genuinely appreciate these old books and I'm happy to see them being published again.