Maigret (and Simenon) again: The Night at the Crossroads 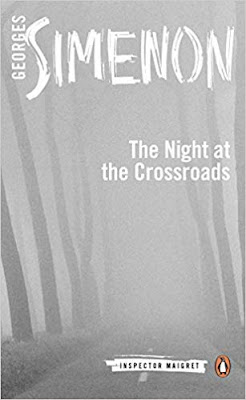 "The whole thing's a scream, don't you think?"

Yes indeed it is, and woe be to anyone who decides that the 151 pages comprising this book can just be breezed through in no time, because this is a clear case of brevity disguising complexity.  On the other hand, it's a novel that packs more of a punch when read in one sitting, which is how I did it -- as in the case of A Man's Head, I didn't want to stop reading once I started it.  It is a hell of twisty story, with Maigret at the helm once again to decipher just what's going on here.

The Three Widows Crossroads is situated along the main road from Paris to Étampes, just three kilometers from the town of Arpajon.   It is home to Carl Andersen and his sister Else, insurance agent Monsieur Émile Michonnet and his wife, and Monsieur Oscar, the owner of the garage/repair shop/gas station there.    It is also the site of a murder.  It seems that M. Michonnet's brand new car had gone missing, with Andersen's old "rattletrap"  car left in its place.  Michonnet called the police, who search Andersen's garage and discover Michonnet's car there.  They also find the body of a man who'd been shot in the chest in the driver's seat.  His papers identify him as Isaac Goldberg, a diamond merchant from Antwerp; Andersen and his sister  have fled on foot to Arpajon to catch the first train for Paris where they are picked up by the police.  As the novel begins, Maigret and his colleagues have been taking turns interrogating Andersen, who claims to know absolutely nothing about, his story never waivering throughout the entire seventeen-hour ordeal.  It is a case where the inhabitants at the Crossroads neither saw nor knew anything, let alone have an alibi.  Making his way to the Crossroads after Andersen's release, he speaks to Else Andersen and learns nothing.  He is expecting the arrival of Goldberg's widow, and she gets there while Maigret and his colleague repeatedly make their way "up and down from the crossroads" several times.  As she begins to get out of the car, a shot rings out in the dark hitting and killing Madame Goldberg, bringing the murder toll to two.  As one might guess, finding the culprit isn't going to be easy, especially with the suspects at hand.

As Night at the Crossroads begins, a mist is hovering over the Seine, turning to fog in the wee hours of the morning as dawn makes its appearance.   Usually when a story begins in this manner, it tends to signal the reader that things are going to be hazy or unclear.  Combined with the darkness that enfolds much of the action at the Three Widows Crossroads, that is definitely the case here. I don't want to say anything else about the plot or how it unfolds, except that like most of the Maigret novels I've read so far, the plot is secondary while the psyche takes center stage.

Once again, a number of readers found the reading to be slow or boring, which is sad for me to see because it's neither.  Perhaps the temptation to buzz through the novel without thinking overtakes people or maybe it's that there is very little in the way of physical clues to follow  as in a normal police procedural novel, where you follow along as the lead detective finds and makes known his or her dazzling discoveries.  This is not that, nor was it intended to be. Reading Simenon requires a measure of patience and some thought;  he doesn't hand it all to you on a plate.   Personally, I had great fun trying to put all of the pieces together in this strange puzzle where nothing is as it seems, and discovered more than one surprise while doing so.

Off to watch the film.