The Sun Down Motel, by Simone St. James 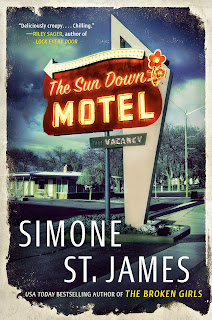 
One of the authors blurbed on the back cover of this book says that The Sun Down Motel is "Deliciously creepy. A chilling blend of mystery and ghost story that will thrill fans of both." That would soooo be me:  I love both a good mystery and a good ghost story, so I picked up a copy in eager anticipation.

The story is told from two different points of view and from two different timelines; the common ground between both is the Sun Down Motel in Fell, New York.   In 2017 Carly Kirk has made her way here to find out anything she can about her missing aunt Vivian, who had just vanished back in 1982.  Carly never knew her, but she'd been "obsessed" with what had happened to her as long as she could remember.  Aunt Vivian was never spoken of at home; there were no photos of her anywhere, and the only thing her mother ever said about Vivian was that "Vivian is dead."  For Carly it was unfair that her aunt had been

Vivian had arrived in Fell in 1982. She hadn't planned on landing there, but  once she'd arrived she picked up a job as night clerk as the Sun Down Motel.  It wasn't long until she started having strange experiences including the strong smell of someone smoking (with no one else there but her), weird phone calls, footsteps and a presence she felt, lights going off and on, doors opening, and a woman who "wasn't real."   In  2017, when  Carly arrived in Fell, the same night clerk job at the Sun Down Motel was coincidentally (ahem)  available, and she took it.   While she investigates what may have happened to  her missing aunt, she comes across a series of past unsolved murders that occurred prior to her aunt's disappearance; she also begins to experience the same strange phenomena at the Sun Down.  What she didn't know was that Vivian had also become interested in these unsolved crimes.  The novel follows both Vivian and Carly as they explore these crimes in their own way across time.    Much has changed in the meantime, including the advent of the Internet, "murderinos" who share an obsession with and information about crimes past and present, cell phones, etc.,  but two things remain the same: the potential for danger as each woman gets closer to answers in her search, and the weird, inexplicable happenings at the Sun Down Motel.


The Sun Down Motel begins with a number of questions that will eventually be answered when all is said and done, and its first chapter drew me in quickly setting up the strangeness to come, especially at the end when Viv writes the following in her notebook:


"The ghosts are awake tonight. They're restless. I think this will be over soon."

I'm thinking at this point that this was going to be good.   And then something happened: right at about page 102  somehow I figured it out.  I knew who was behind it all and I knew how this novel was going to end including the twisty bit towards the end.   I wrote down the name on an index card as well as a prediction, stuck it in the book and went on to finish reading it, hoping I'd be wrong. I wasn't -- on either count.  Oh, what a disappointment!  Obviously there were plot points that I couldn't know by page 102, but somehow I'd pegged it nonetheless in terms of the weirdness at the Sun Down, the solution to the crimes, and a big part of the twisty ending; for me the suspense just wasn't there.   What was said (referring to the back-cover blurb again) to be  a novel that "takes danger and fear to a new level" came off like a beach read.  So there goes the promise of being  "thrilled."    What about  "deliciously creepy?" one might ask.   Well, that didn't quite pan out as well as hoped either.  Ghostly/supernatural stories from across the world and across time happen to be a large portion of my reading bread and butter, and the one in this book I found sort of lackluster and  not really very frightening at all, landing more on the side of  supernatural effects that you might find on tv or in a film.  To be fair, I will say that for the most part some of these scenes were written so vividly that I could actually see some of them in my head as they were happening, but the hackles on the neck just weren't there -- another disappointment. 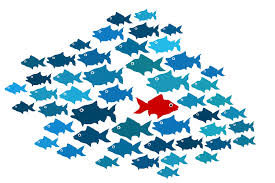 The truth is that  most readers loved this book and have given it stellar ratings as well as an abundance of uber-enthusiastic reviews,  so once again,  I find myself swimming against the tide of popular opinion; once again I am the little red fish going the other way.  Sometimes I'm just not the right audience for certain books; this one falls into that category.  It happens to everyone.