The Hex Murder, by Alexander Williams 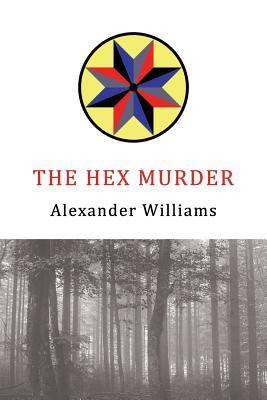 Just last week I was once again suffering from a hefty case of insomnia, so at about 2 a.m. I came downstairs hoping to find something to watch on TV.   I was  just sort of scrolling through what's out there and I found a documentary I hadn't seen before called Hex Hollow: Witchcraft and Murder in Pennsylvania, released in 2015.  The actual murder took place in 1928, with the killer believing that he had been cursed by the victim.  At the heart of that story is the practice of Braucherei or "powwow," something I'd never heard of before, but which I found utterly fascinating.  After I'd watched this documentary, it hit me that sometime last year I'd bought a book with a hex sign on the cover, so off I went up to the American crime shelves and there it was.

In his introduction to this book, Curtis Evans cites the Rehmeyer murder from the documentary, noting that afterwards "crime journalists, knowing ghoulish copy when they saw it," would go on to report about  any death "even vaguely connected to a powwower -- or rumored to have a connection" as  a"hex murder," which was "most unfair" to these people.  As it turns out though, in 1934 a  real "hex murder" actually occurred when a woman in Pottsville was murdered because of her killer's belief that she had "hexed him."   The author of three other detective novels (The Jinx Theatre Murder, 1933; Death Over Newark, 1933; Murder in the W.P.A., 1937),  Williams, as Evans notes,   had a "large reservoir of life experience"  from which he could draw for material for his books; the Hex Murders reflected "his own background in journalism and the publicity business," as the author "tapped into years of newspaper stoked notoriety about ethnic German folkways in the Pennsylvania Dutch country."   And indeed, while the crime itself takes place in New York City, the investigation will lead the main character into, as the back-cover blurb states, "the backwoods of Pennsylvania."

At 477 Banks Street, an apartment building not unknown to the beat cops, a patrolman encounters a man wearing pajamas and bedroom slippers, darting this way and that while frantically waving at him, "as though a jumping-jack had gone mad and was indulging himself in an incoherent Caucasian saraband."  Following him into a fourth-floor apartment, he discovers the body of a dead woman, viciously murdered by having had her throat slit to the point of having her head nearly severed.  The police decide that the man who had alerted them to the crime, Robert Crocker, was the culprit after a bloodstained razor was found in his apartment by an eager young reporter, Peter Adams.  His pajamas were also bloody, and rather than phoning an ambulance or the police on the gruesome discovery of his girlfriend Marguerite Scholl,  he had gone out into the streets to hunt down a cop.  Things go from bad to worse when he realizes that he can't account for his time after leaving a party  in Marguerite's apartment, telling police that he'd drawn a "blank" because he was so intoxicated.  The police and the District Attorney are more than convinced of Crocker's guilt, but Adams  isn't so sure.  Worried that they're about to put an innocent man in the chair, Adams takes a leave of absence to try to find anything that might help Crocker.  He begins in Marguerite's apartment, where he discovers letters from Marguerite's mother in Erwinna, Pennsylvania.  On each letter appears this strange sign,

which is duplicated "repeatedly" in color in the arch of the apartment's fireplace.  With the strange letters and added evidence from the beat patrolman, Adams realizes that he needs to begin his investigation in rural Pennsylvania, bringing along with him a friend of Crocker's, a young woman by the name of Houston King, who also believes that Crocker is completely innocent.  It is in Pennsylvania where this story begins to really gather steam; it is also here that Adams will find himself in the midst of the most bizarre strangeness he's probably ever encountered.

Given that the book isn't very long, it is a huge credit to Williams that he managed to not only tell a suspenseful and quickly-moving story, but he also provided the reader with a vivid cast of characters (some of them utterly unforgettable), and enough of a creepy atmosphere that makes the book difficult to put down.  I did find myself tensing up in reading how the police  treated not only the crime scene but also their suspect, not to mention the fact that circumstantial evidence alone was enough to send the poor guy to the chair; I had to keep telling myself that this is the 30s.   I started this novel last night at around 10:30 and stayed with it until the wee hours of the morning, and not simply because I wanted to know who killed Marguerite Scholl. It's more that this book took me completely into the zone and I didn't want to leave -- it's that good.   I'm seriously paying for it today but it was well worth my current zombified state of being -- this is not your average Golden Age detective story by any stretch.

So very highly recommended, especially for people who enjoy vintage crime but also for mystery readers who are always on the lookout for something completely outside the norm.  "Shuddery" indeed!!