Inspector Stoddard is on the case: The Man With the Dark Beard and The Crime at Tattenham Corner, by Annie Haynes

Back in April I read the first of the series by Annie Haynes featuring as her detective a certain Inspector Stoddart of the Yard.  The Man With the Dark Beard was published in 1928; the three remaining books in this series were published in 1929 and in 1930.   Book number three, Who Killed Charmian Karslake? (1929) was published posthumously, while the fourth, The Crystal Beads Murder, was completed by someone else before it was published in 1930, although Haynes had already been working on it prior to her death.  For the complete story you can read Lizzie Hayes' post about Annie Haynes on her informative blog, Promoting Crime Fiction. 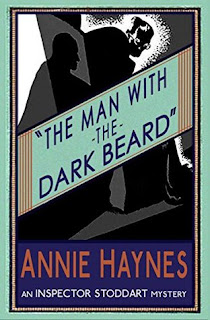 This is is tricky book to post about,  because any minor hints past the basic murder plot and subsequent investigation will absolutely give away the show here.  As it was, I had it pretty much sussed  before page 60,  but I do believe that's because it leans way more toward Victorian sensation fiction than a typical golden age mystery, and as I am a huge fan of sensation fiction, the plot was easy to figure out.  On the other hand, it is definitely a murder mystery, one which introduces Inspector Stoddart of the Yard, who will find himself investigating two murders before all is said and done.

It seems that Dr. John Bastow has something rather heavy on his mind when he asks his friend Sir Felix Skrine the following question:


"Suppose that in the course of a man's professional career he found a crime had been committed, had never been discovered, never even suspected, what would you say such a man ought to do?"

He goes on to up the curiousity ante by asking what if the "hypothetical man" had "kept silence -- at the time," leaving the criminal to go on to having "made good." What then?  Skrine answers that Bastow ought to know his "duty to the community," when they are interrupted by the ringing of Bastow's surgery bell, and they agree to meet later to talk more about Bastow's dilemma.  Unfortunately, the ringing of the bell is not the only interruption that Skrine will have to contend with, because before the two can continue their chat, Bastow is found dead in his locked office, having been shot in the head.  Enter Inspector William Stoddart from the Yard.  There are very few clues onsite, except for the fact that Bastow had been writing a letter to Skrine about their prior conversation, in which he revealed that the "proofs" were in his Chinese box, which seems to have gone missing.  Also near the corpse is a scrap of paper which reads "It was the man with the dark beard."  What is also known is that Dr. Bastow disapproved of his twenty year-old daughter Hilary's plans to marry young Basil Wilton, Bastow's assistant, who just happens to have been the last person known to have seen Bastow alive, and who just happens to have been dismissed from the doctor's service shortly before the discovery of the body.

The concerned Skrine, who is "one of the greatest -- some said the greatest -- criminal lawyers of his day," also stands in loco parentis to Hilary until she comes of age, and to her disabled brother Fee as well. He offers them a cottage near his country house, taking them both away from the city.  As their father's executor, he also means to continue Dr. Bastow's wishes against Hilary marrying Basil, and eventually makes Hilary an offer that she will struggle against yet find it's one she really can't refuse.  In the meantime, Basil has his own issues, not the least of them the fact that he's found himself a suspect in yet another murder.  As Stoddart moves into the investigation of this second unnatural death, he has no clue that time is actually running out and that it's not only Basil's fate he holds in his hands.

While I have to be honest here and say that The Man The Dark Beard was not as good as it could have been, because of too much focus on the sensation-fiction plot.  However, giving credit to the author, she obviously spent a lot of time in plotting what  turns out to be a truly nefarious crime, as that part of the novel came face to face with the detection in the case.   I had to look at the book from that particular vantage point, otherwise what's left is an all too-easy-to-solve mystery that offers very little challenge to the reader.

That is not at all the case in the next book, The Crime at Tattenham Corner, which I did not want to stop reading once I'd started it.  Again, some nice plotting from Haynes here, but this time the


actual mystery carries a lot more heft than her first Stoddart novel.  Stoddart and his "most trusted subordinate," Alfred Harbord, are called to Hughlin's Wood, "not a great many miles from Epsom," where a body has been discovered, face down in a foot of water in a ditch.  All that is known is that it is "a man of middle age" and  "evidently of the better class." It seems that the man has been shot in the head, and that a card in his pocket bears the name of a "man high in the financial world." Based on the name on the card, the monogram on the man's watch and a letter in his pocket, it seems that their dead man may be Sir John Burslem of Porthwick Square.  Burslem's valet is sent for, and on arrival, instantly makes the corrorborating identification.   The police immediately begin to wonder if perhaps his death on Derby Day has any significance, since his horse, Peep O'Day, was set to run and was odds-on the favorite for the win.  As it turns out, "an owner's death renders void all his horses' nominations and entries," leaving Peep O'Day's rival, Perlyon, set up to take the prize.  The owner of Perlyon is a Sir Charles Stanyard, who by some weird twist here, was once engaged to Burslem's widow Sophie, his second wife.   Stanyard takes the lead on the suspect list, but there is quite possibly another motive aside from the Derby.  It seems that on the night before his death, Sir John had inexplicably and quite hurriedly changed his will so that Sophie would inherit all, leaving out Sir John's daughter Pamela, "the apple of his eye," completely, followed by the strange disappearance of Ellerby, Sir John's valet, who was witness to the new will.   Before it's over, Stoddart and Harbord will find themselves deep in a convoluted web of mysteries that they must solve before they can solve the bigger mystery of Sir John's murder.

The Crime at Tattenham Corner is truly ingenious, allaying all of my fears about continuing the series after reading the previous book, and it is genuinely satisfying as well.   This time around I was almost finished before I cottoned to the author's scheme, but only a small part of it; the clever twists (and there are more than one) in the plot did not make it at all easy.  Haynes has quite a few tricks up her sleeve this time around, offering a mystery that will keep armchair detectives both  guessing and entertained.  Around the murder investigation there are strange happenings including a séance or two, hosted at her home by the very strange Mrs. Jimmy Burslem, Sir John's sister-in-law, whose husband is known to be trapising around Tibet looking at old ruins, while widow Sophie who never had a head for business, makes plans to run her husband's financial empire.  The main attraction, though, is most certainly Stoddart and his investigation.  He truly is a policeman who never gives up, no matter what it takes.  Wink wink.

So bottom line: The Man With the Dark Beard is okay, but for readers who have familiarity with the often-convoluted plots found in Victorian sensation novels, may be a bit on the easy side to figure out, while The Crime at Tattenham Corner is a definite yes, making me eager to get on to book three, Who Killed Charmian Karslake? asap.

Don't miss the excellent introduction in each book by Curtis Evans, whose crime fiction knowledge knows absolutely no bounds.