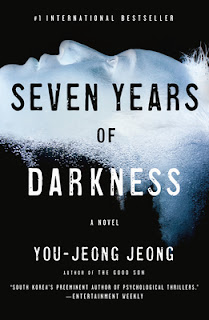 For some unknown reason I chose to make this book a daytime read rather than leaving it upstairs on my nightstand, and it turns out to have been a wise decision.  Seven Years of Darkness is an absolute page turner -- had I started it at bedtime, I would have had to stay up all night to finish it.

The life of eleven year-old Choi Sowon was changed in September, 2004, when for some reason one night his father Hyonsu opened the floodgates of the Seryong dam where he worked as head of Security.  In the prologue opening this story, Sowon describes seeing the devastation his father's act had caused, including the destruction of Seryong village where the family had lived for only two short weeks.  But it gets worse:  Hyonsu was arrested not only for what he'd done at the dam, but also for the murder of a young local girl who had been earlier been reported missing by her father.   Sowon is taken in by relatives, but finds no stability.  Someone is bound and determined to make his life a misery, taking it upon him or herself to send out copies of newspaper articles detailing Hyonsu's crimes, causing Sowon to be moved from relative to relative, and causing him to be ostracized among his peers at school.  He finally finds some measure of peace when he is taken in by Mr. Ahn, who had once worked with his father at Seryong Dam.   But Mr. Ahn has disappeared, and right after Sowon notices that he's gone he receives a package from an unidentified sender containing Ahn's "reporting notebook," a "recording watch," a USB drive, a "bundle of letters," and a scrapbook.   At the bottom of the box, he also finds a  "thick stack of paper" of which the first page was blank, but the next page  of this manuscript begins as a "prologue," set at Seryong Lake, August 2004.  As the back-cover blurb states, the contents of the package "promise to reveal the truth at last."

I don't usually read books that are billed as thrillers, so I was taking a big chance here.  I needn't have worried -- I was hooked right away in the opening prologue, making it so I had to know what had actually happened here and the why of it all, causing pages to be turned quickly.  I was also immediately enveloped in the atmospheric mists and fog which the author uses to great effect, as well as the creepiness of a submerged village complete with yellow lane-dividing lines and nameplates on the empty houses.  She also managed to handle some pretty horrific scenes of violence without being gratituitous in the telling, which I appreciate these days.  But what I really liked was the author's focus on broken dreams that can take their toll on a person, making this not just a thriller per se but a novel that examines different factors leading up to the moment when, as the author says in her note at the end of the book, "a man ... made a single mistake that ruined his life."  The outward-rippling consequences of that moment follow throughout this story.  I will also say that by the time I'd finished the book, I was thinking that there is more than one person here who could share in the blame leading up to that moment, but I'll leave the reasons why for others to discover.

Some of the text could have been reined in to make things a bit more taut in the telling, and the climactic scene at the end seemed a bit rushed.  However, those are minor niggles compared to the rest of this story, which kept me on edge throughout.   As the back cover says, it's "Dark, disturbing, and full of twists and turns," to which I say, what more could you possibly want?