Dolores Hitchens X 2: Footsteps in the Night and Beat Back the Tide

In this perfect pairing of perplexing puzzlers from Stark House Press published in July,  murder rattles skeletons in a number of closets, unlocking and shaking loose secrets both present and past. 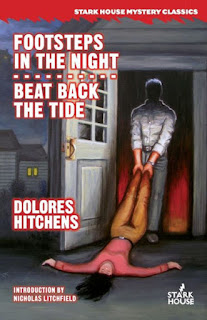 "These people are all strangers."

Footsteps in the Night (1961) is a whodunit, set in a new housing development in Southern California, more specifically in the hills overlooking Pomona.  It's so new that not all of the houses have been finished, and "everything that's completed or even near it" has been sold.   It seems like an ordinary, upscale neighborhood on the outside, but as Hitchens takes us inside into the lives of some of Dellwood's residents, we discover that there is nothing ordinary about these people at all. Like most people, their secrets are normally kept behind their closed doors, but nothing stays hidden when a young teenaged girl disappears, later to turn up dead.  It also seems as if everyone has made up their minds about who did it,  so it will take a clever Sheriff's lieutenant to not only  sort through and make sense of  the scant clues, but also to weave his way through the secret lives of the Dellwood community to prevent a terrible injustice.

This is a slow-building, suspenseful and most compelling mystery,  and I changed my mind as to the who more than once before all was revealed.  However, it's the uncovering of everyone's deepest secrets that is the big draw, as the focus here is mainly on the characters.  Some of these people you can feel sorry for, whereas for some of the others, well, let's just say they are likely not people you'd want as your friends.   As Nicholas Litchfield notes in his introduction, there's a wide range including


"... a sex fiend with a conniving, sadistic wife; a bothersome, goofy old grandfather; a middle-aged spinster with a young gigolo for a lover; a sour, short-tempered developer; and a reclusive investment banker and his melancholic, crippled son..."

who "spy on each other, prying into each other's personal business," while dwelling on "their own inadequacies."    And even though there is only one murderer,  as the blurb says, "They're all guilty of something."


On to Beat Back the Tide now, which would have made a great film in its day (black and white a plus).   As in Footsteps of the Night,  this story also takes place in Southern California but further south along the coast, and opens with the arrival of young Francesca Warne, a "former schoolteacher, now a nurse," who has come to act as a sort of governess to Jamie Glazer.  The Glazer home sits at the top of a cliff, making it private "for everybody except someone on a ship at sea with a spyglass."  Glazer, a widower,  is a contractor and does very well for himself; as far as Mrs. Warne goes, what he expects from her is a "robot-like efficiency and stamina, and an unrobotlike warmth toward his son.  Just that."  But just after a week, strange incidents occur that upset the household and make Glazer rethink her presence there as he ponders the "disturbing quality about her. An aura, a miasma, of disaster. "  While he tells himself that "she did not appeal to him," he also knows he doesn't really want her to leave, realizing a "bleak solitariness of himself" that "had a kind of death in it."

I have to say that up to this point (some thirty pages in),  I thought that this novel just  might be taking a bit of a gothic-ish sort of a turn (like those books my mom used to read by Phyllis A. Whitney years ago), but that idea was quickly let go of with the coming of the meat and potatoes of this story:  it seems that Mrs. Warne's husband had been murdered on the beach below the cliff, evidently having been shot from above.  She has come to the Glazer home to learn the truth about her husband's death, about how he was killed and by whom.   Glazer warns her about opening "old wounds," but she reaches out to him for help in solving the murder.  As he begins to look into the murder of Adam Warne, he realizes that pretty much everyone who knew him hated him, so that his killer is not going to be easy to pin down, not to mention that some people believe that the past is the past so Glazer shouldn't be making waves by stirring it all up again.

I chose the words "perfect pairing" beginning this post on purpose -- in both there is a murder shaking loose a lot of secrets that everyone involved wants to keep hidden; in both there are shifts in points of view from character to character that add insight to respective situations and respective personalities.  In both there are also numerous possible suspects with different motives, and both books have an ending that I didn't see coming.  And oh yes -- both books were selected for the Doubleday Crime Club.    Do not miss author and editor Nicholas Litchfield's most enlightening introduction, where he concludes that these " 'skeletons in the closet' mysteries showcase the author at her very finest."

Recommended to readers of vintage crime, and to readers like myself who truly love discovering women writers not previously read.  I've already started another book from Stark House by Ruth Sawtell Wallis, but we'll save that for when it's published.

My very grateful thanks to the powers that be at Stark House -- you people rock.