Maigret, again: The Grand Banks Café and The Dancer at the Gai-Moulin

"...understand and judge not."

I've recently been making my way through Ellroy's LA Quartet, and after finishing The Black Dahlia and The Big Nowhere, I grabbed LA Confidential  from the shelf, opened to page one and just put it back.  I think my brain was telling me that I'd had too much for the moment and that it was time to take a break.  I knew exactly what I wanted to read -- Maigret.  These books are like reading comfort food for me. 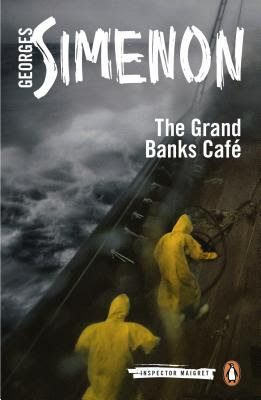 "If anyone asked me what the distinctive feature of this case is...I'd say it has the mark of rage on it."

It's June, which is normally vacation time for the Maigrets.  Every year they make their way to a village in Alsace, where La Madame spends her time with family "making jam and plum brandy."  There's a change of plan this year though,  as Maigret asks his wife what she thinks about making a trip and staying by the sea.  The destination he has in mind is Fécamp, a small seaside town north of Le Havre, and he tells his wife that they'll be "able to just take it easy at Fécamp as anywhere else."  While "objections were raised,"  it's a done deal: Maigret has received a letter from an old friend there asking for help for a former pupil of his, Pierre Le Clinche, who has been arrested for the murder of a ship's captain.

Once in Fécamp, Maigret makes his way to the Grand Banks Cafe, where he finds the crew of the recently-returned Océan, whose captain had been found floating in the harbour just hours after the ship had docked.  He learns that the "evil eye" had been cast over the ship even before it had sailed -- a sailor had broken a leg while waving goodbye to his wife, the ship's boy was "washed overboard by a wave," the captain had seemingly gone mad, along with other disasters including rotting cod.  The sailors, however, are reluctant to talk to Maigret about their voyage; he is told only that it might not be a bad idea to  "chercher la femme," which, without spoiling anything here, turns out be sound advice.    It seems that other than picking up a couple of scattered clues here and there,  Maigret is stumped -- no one even remotely involved with the case, including Le Clinche,  will say anything.  The only thing he knows is that the case "has the mark of rage on it."

The answers, when they come, are put together slowly; once again, the focus is more on the "why" of it all rather than the who, one of the key characteristics of a Maigret novel, or at least of those I've read so far.  As with all of these books, Simenon, via his detective, ventures into the often dark territory of human nature and psychology to arrive at his conclusion.  This time around the "why" is a true jaw dropper, and once the answer is revealed, the question to be asked here centers around the nature of guilt.  This one is well worth your time; don't breeze through it even though it's a scant 153 pages.

"It's a banal case, in spite of its morbid nature and apparent complexity."

As much as I enjoyed The Grand Banks Cafe, the better book is The Dancer at the Gai-Moulin, which completely threw me off pretty much from the start for more than one reason, and goes to show that sometimes going rogue is not a bad thing.

There's something about a crime novel set in the seedier parts of a city that appeals, and this one is no exception.  Here it's the seamier side of Liège, which in real life is Simenon's home town, where the action takes place.  A plot to rob the till after everyone leaves the club Gai-Moulin goes awry when two teens, Delfosse and Chabot, stumble over a body on the floor of the club in the darkness.  A match is lit, and they are sure the body is that of the obviously-wealthy man they referred to as "the Turk", a stranger who had come into the club earlier that night, had bought champagne, and had been entertained by the dancer Adèle.    Needless to say they're petrified and take off.  The next day, a very rattled Chabot happens to see a newspaper article about a body found in a laundry basket on the lawn of the Botanical Gardens; surprised to say the very least,  the two meet up.  It's then that they realize they're being followed, but they make their way to the Gai-Moulin, as it would be completely normal for them to be there.   Strangely they discover that everything is like it always is, but they make yet another plan which very quickly goes horribly awry.  That is really all I'm going to say about plot because really, to know any more ahead of time will completely spoil the enjoyment of reading this book, which is so very different from all of the Maigret novels preceeding this one.

While Simenon's series novels tend to get middling ratings from many readers, he's one of my favorite crime writers ever.   When I want to read something deeply noirish, I turn to his romans durs, but when I want something a bit on the lighter side it's definitely Maigret.   With Dancer at the Gai-Moulin, he offers a plot that may be somewhat incredulous, but when it comes right down to it, I just didn't care that he wasn't exactly following the mechanics of the typical detective/police novel. In fact, using the term "typical" in describing Maigret just seems wrong.     I was much more taken with the very clever  twists in the story as well as the seedy, noir ambience Simenon paints here, down to the "crimson plush" upholstery of a banquette in the club and the "shabby peignoir" and mules worn by Adèle in her room.   And that reminds me:  don't kid yourself that Adèle, the titular dancer at the Gai-Moulin,  has only a small part to play here.  She may not show up often, but she really does take center stage.

Only 65 more to go!  I'll get there and probably love every second of  the journey.