The Black Dahlia, by James Ellroy 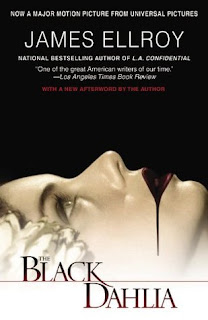 "...our partnership was nothing but a bungling road to the Dahlia. And in the end, she was to own the two of us completely."
In the Afterword section of this book, Ellroy says the following:

"A personal story attends the Black Dahlia, both novel and film. It inextricably links me to two women savaged eleven years apart."

Those two women  are his mother  (Geneva) Jean Hilliker, who was raped and murdered by an unknown killer who then left her body in a Los Angeles roadside in 1958, and Elisabeth Short, aka "The Black Dahlia" whose body in 1947 was discovered in a lot on an LA street after having been horrifically murdered and mutilated.  Ellroy had first encountered Elisabeth Short's story at the age of eleven, after his mother's death, while reading Jack Webb's The Badge, and from there,  "Jean Hilliker and Betty Short" became "one in transmogrification." Over the years this "Jean-Betty confluence" led to the writing of The Black Dahlia, in which Ellroy, as noted in a 2006 article in Slate,

"transformed the murky facts surrounding Short's life and death into art, the unknown 'dead white woman' becoming a tabula rasa on which the author could wrestle with his anger and affection toward his mother."

The Black Dahlia not only lays bare Ellroy's demons, but in his version of the Black Dahlia case, it turns out that no one involved is left unscathed.

Just briefly so as not to ruin it for potential readers,  it's 1946.  The promise of a coveted spot in LAPD's Warrants Division as well as chance to be a department hero prompts Officer  Dwight "Bucky" Bleichert to agree to a boxing match  that will hopefully result in good PR and a five-million dollar bond for the LAPD.  His opponent is Officer Lee Blanchard; together they become known (appropriately)  as Mr. Fire and Mr. Ice.   A solid partnership builds between the two men, who also become close friends as Bleichert eventually finds himself teamed with Blanchard in Warrants.  Fast forward to January 15, 1947 when the partners get info about a guy they've been trying to find and arrest.  Arriving at the place he's supposed to be, the bust gets sidelined when Bleichert looks out a window and notices a lot of police activity down below at 39th and Norton.   When they go to check it out, Bucky sees a cop "knocking back a drink in full view of a half dozen officers," and "glimpsed horror in his eyes."   It is, as he hears, "the worst crime on a woman" any of the cops have seen.  They have found the body of a young woman who had been bisected at the waist, obviously tortured and horribly mutilated, with her mouth, "cut ear to ear into a smile that leered up at you," and Bucky tells himself that he would "carry that smile" to his grave.

The body belongs to Elisabeth Short, who will in time be dubbed "The Black Dahlia" by the press.  Even though they're not working Homicide, Bleichert and Blanchard are pulled into the investigation, although it isn't too long before Bleichert wants out.  For various reasons peculiar to each of these men, the horrific death of Elisabeth Short becomes an obsession; eventually,  as Bleichert reveals in the prelude to this novel, The Dahlia "was to own the two of us completely."  Set against the backdrop of an emerging, post-WWII  Los Angeles, it is this obsession with her death and her life that Ellroy explores in this novel,  as well as the psychological and other repercussions that move from character to character.

The Black Dahlia is book one of four in Ellroy's LA Quartet.  An excellent blend of fiction and reality, it  messed with my head, kept me awake and chilled me to the bone.  As dark and disturbing as it is, and while in my opinion it falters a bit in the reveal, it is also one of the best crime novels I've ever read, and I knew immediately that there was no way that I was not going to read the remaining three books.  More on those to come.

After reading this one, find a place outside to let the sun shine down on you.  You'll need it.