Portrait of a Murderer: A Christmas Crime Story, by Anne Meredith 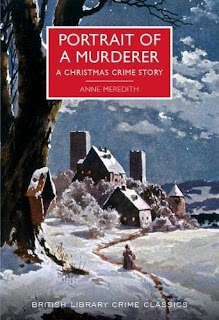 9781464209048
Poisoned Pen Press, 2018
originally published 1933
243 pp
paperback
Warning: cute and cozy this book is definitely not.  While it begins at a family gathering at Christmas, nobody's going a-wassailing, nor is there even the slightest hint of sleigh bells jingling, ring-ting tingling too -- this is the story of an unpremeditated but cold-blooded murder, the person responsible, and the aftermath.
The usual Christmas tradition at the Gray house is for the Gray children to come to the family home. Out of six, there are two already living at Kings Poplars; the remaining four had long ago left to make their way in the world.  Yuletide is not necessarily a happy time for this family, because, as we are told early on, patriarch Adrian Gray is, "on good terms with none of his children."  We learn why this is over the first forty-something pages, and we also learn why it is that, as the back-cover blurb notes,

"None of Gray's six surviving children is fond of him; several have cause to wish him dead."

Christmas morning rolls around, and Adrian has failed to join the family for breakfast or for the usual Christmas task of reading the lessons.  When he is found dead in his library, it was thought at first he'd suffered a stroke but when the police arrive, it doesn't take long to figure out that Adrian's demise was anything but natural.   The killer, however, is ready for them, having arranged things so that the accusing finger points elsewhere.     I won't reveal any details, but this setup makes for very tense reading right up to the end as an innocent person is arrested, tried, and sentenced.   Will justice be served or will a murderer remain free to walk the streets?

Portrait of a Murderer is a product of the interwar period, a time of great social change, and the author uses the decline in class as well as the perceived decline in morality in examining her players. It's done very well -- as Martin Edwards quotes Dorothy Sayers in his introduction, this story focuses  "less emphasis on clues and more on character. "  It's not long after the first pages are turned before this point becomes crystal clear, as Meredith weaves her way through the lives of the Grays, laying a foundation for the rest of the story.  She obviously had a keen understanding of human nature that allowed her to grasp the inner selves of these people and to portray their psychologies at work both individually and vis-a-vis  other family members. Readers who must have likeable characters, or characters with whom they can identify likely won't find that in this novel, as the author reveals that with an exception or two, the Grays are a pretty despicable lot.

I feel like my hands are tied here, since giving away any more about this book than I've already done would be doing a disservice to potential readers. I will say that although the forty-plus pages in part one are mettle-testing to even the most patient of readers, do not give up -- the information gleaned from there will serve you greatly in the long run.   This is the sort of crime novel I love reading, answering the question of why rather than focusing on the who.  As Carolyn Wells is quoted as saying in the introduction, it is indeed a most "Human Document."

I couldn't put it down once I'd started.