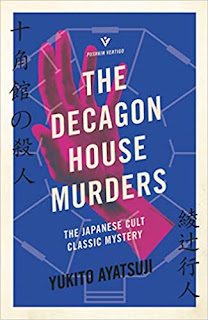 9781782276340
Pushkin Vertigo, 2020
originally published as Jukkakukan no Satsujin  (十角館の殺人),  1987
translated by Ho-Ling Wong
284 pp
paperback
"We're just the poor insects that flew into the trap called the Decagon House"
Had I been eating something when the big reveal of this story came along, I probably would have choked because of the huge gasp that involuntarily came out of me.  As soon as that cleared, the first words out of my mouth were "holy sh*t."  I don't have that reaction very often;  even though there have been many times I've been truly surprised at the unmasking of the who, this one absolutely takes the cake.
It began as a "little adventure" for seven members of their university's Mystery Club, who'd decided to make the island of Tsunojima the destination of their club trip.   They'd gone there looking forward to

"Freedom on an uninhabited island. A cold case to pick over. A bit of a thrill."

They had arrived on the island on March 26th, having been taken there via fishing boat.  Tsunojima, located about five kilometers off the coast of Kyushu's Oita Prefecture, had been the site of a still-unsolved "mysterious quadruple murder" six months earlier, resulting in the deaths of Nakamura Seiji (last name first), his wife Kazue, and the "servant couple who worked for them.  Nakamura's gardener was thought to have been the killer, but it was never proven since he'd disappeared and never been seen again.  The murder culminated in a fire which had completely destroyed the main house, the Blue Mansion; the "annex building" known as the Decagon House was left intact.  Decagon House was to be their home away from home for the next few days; together, each of the seven members -- Ellery, Carr, Leroux, Poe, Van (short for Van Dine),  Agatha and Orczy -- comprised "the core writing group" of the club.  For the upcomng April club magazine, they were each asked  while on the island to write one story based on the magazine's title, Dead Island,  the name of the "first Japanese translation of Dame Agatha's masterpiece" known to everyone today as And Then There Were None.
Oh no, I thought, I don't want to spend my reading time going through a Christie ripoff, and as luck would have it,  aside from a few nods in homage to And Then There Were None, it turned out to be anything but.
The novel moves back and forth between what's happening on the island and what's going on back on the mainland, where a former member of the University Mystery Club, Kawaminami Taka'aka, receives a mysterious letter containing only one sentence:

"My daughter Chiori was murdered by all of you."

Kawaminami is floored when he realizes the letter is from none other than Nakamura Seiji -- and that he's received an  "accusation made by a dead man."  What's more, he discovers right away that at least one other member of the club, now on the island,  has received the same correspondence.  Along with two other acquaintances,  he begins to delve into the matter of the strange letter, which leads them to also investigate the case of the quadruple murders of the previous September on Tsunojima.  In the meantime, the weirdness begins back at the island with the discovery of seven "milky white plates," on which red characters had been printed, 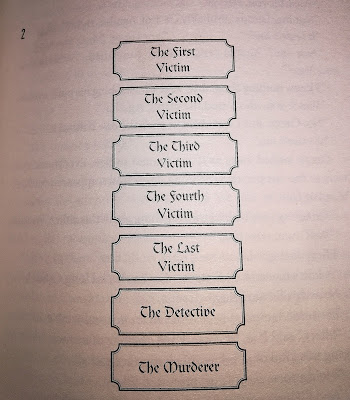 quickly followed by the mysterious death of one of the seven and the first of the plates having been tacked to the dead person's door.  With no possibility of leaving the island, and as more deaths follow, as the back cover blurb notes, "the survivors grow desperate and paranoid, turning on each other."

As I've always said about this genre that really stands on its own within the genre of crime/mystery fiction,  these stories are less character oriented and more about how the deed was done.   It's no surprise to me on reading several reader reviews  of this book that noted the lack of character development, because that's pretty standard with this sort of thing, something I've come to expect after reading so many of them.  Taking that aspect away, focusing on the who and the how, The Decagon House Murders becomes an intense puzzle, the solution of which I would never have guessed.  I will say that I'm a bit frustrated at not being able to share my experience with the identity of the who, but to do so would be giving away the show.  I do think I would like to take a look at the original though, because I'm not sure I would have translated some things in this book the same way, for example, in having one character refer to the group as "y'all."  I mean, come on. Seriously?

I had great fun with this novel, and I certainly would recommend it to regular fans of this sort of puzzler, or to fans of Japanese crime fiction in general.  The ending alone was well worth the price I paid for the book.