The Problem of the Green Capsule, by John Dickson Carr 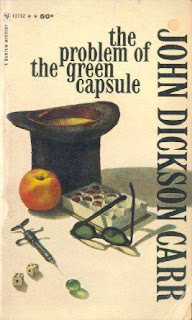 Bantam, 1964 (reprint)
originally published 1939
168 pp
mass market paperback
"...there was a trick in it somehow..."
The second book in the séptimo círculo collection, The Problem of the Green Capsule is book number ten in Carr's Gideon Fell series.  I have to be honest: I haven't read many of these novels -- after collecting them from library/yard sales for what seems like forever, they've been living in wicker shelf baskets for years.  It feels weird not to be starting with the first novel of this series as Carr refers to past Fell adventures in this book, but I didn't mind  --  he gave nothing away in terms of plot so I can go back and read them without knowing anything.
Given what happens here, the original UK title, The Black Spectacles, makes much more sense than its American title (more on that later).    The cover is a bit more appropriate (and much better artistically) as well, with the main action of the story in plain view for everyone to see.  At the same time, I own a lot of these old Bantam reprints where they've put what just might be several key clues on the cover.  I used to think this was cool, but now it's just a bit annoying knowing what I'm supposed to be looking for.

Detective Inspector Andrew MacAndrew Elliot of Scotland Yard's CID has been assigned to look into a case in the village of Sodbury Cross, where someone has been poisoning chocolates in Mrs. Terry's tobacco-and-sweet shop, somehow substituting strychnine-laced confections for the chocolate creams kept on the  shop's counter.     Sadly, eight year-old Frankie Dell died after he'd "wolfed down the lot" he'd bought, while the children of another family and their "maidservant" who had also picked up a half pound of the tainted chocolates became very ill.  The young niece of local businessman Marcus Chesney, Marjorie Wills (for reasons I won't go into here),  is the main suspect.  As Elliot begins to work with the local police on that case,  word arrives that Marcus Chesney is dead.  After arriving at the Chesney home, the detectives hear a fantastic story: as it happened, Chesney's murder not only occurred in front of a small group of people, but that

"every one of 'em saw the murderer and followed every move he made."

Even more surprising is that "they can't agree on anything that happened."

What comes next is unlike anything I've ever read before.

Chesney, who has as a hobby "the study of crime," had earlier invited his niece, her fiancé George Harding, his brother Joe and a friend of theirs, a professor Ingram, to a "performance,"  a sort of "psychological test" to start at midnight.  His helper Wilbur Emmet, one of the men who worked at the Chesney home, was to have a role in this scene, and after it was over, Chesney would have a list of questions that the participants were to answer, based on what they'd seen.  George was to film the entire thing as well.   What happens next went according to plan, except for the fact that Chesney was murdered and Emmet was found severely wounded outside next to a bundle of clothing and other props used during Chesney's little game.  The problem is that the potential suspects were all together at the time, never out of sight of one another.  When another murder occurs, a rather mystified Elliot turns to Dr. Fell, who is staying in a hotel in nearby Bath, enlisting his help to solve this rather baffling crime.

I mentioned earlier that the original UK title, The Black Spectacles, turns out to be more appropriate than its American counterpart.  In a letter from Marcus Chesney written earlier to Fell which he doesn't hand over right away to the police, Chesney had noted the following:

As Dr. Fell says  before he goes off to observe George's film record of that strange night,  "that, together with what we are going to see and hear to-night, should complete our case."

I'll confess that I had absolutely no clue as to the who and the how before reaching the end and the big reveal, always a good sign.   I'm also sure that the phrase "jaw-dropping" was more than appropriate at that point, garnering silent but worthy praise for the mind that put this puzzler together. At just over 160 pages it should have been a quick read, but there are a number of elements at play here, each to be unfurled slowly,  mused over, and put on hold in the brain as the story progresses.    Not only is there a solid, impossible mystery here, but one of the added perks from my point of view is a brief, whirlwind history of infamous real-life poisoners, in which Fell expounds on the psychological make-up of people who had turned to this method of killing.   Another clue that The Problem of the Green Capsule is not going to be your run-of-the-mill Golden-Age detection story comes from the book's subtitle, "Being the Psychologist's Murder Case."  Add to that the author's  remarkable construction of the sleight-of-hand, misdirection and illusion that rule the day in this well-plotted novel, and it becomes something rather ingenious.  I also had great fun with this book, which in the end, is the most important thing.
Definitely recommended.
Posted by NancyO at 3:40 PM