Lament for a Maker, by Michael Innes 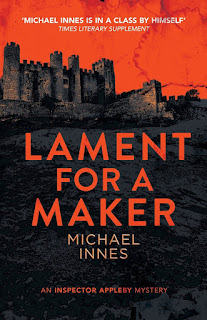 978191294148
ipso books, 2017
originally published 1938
275 pp
paperback
"Sen for the deth remeid is non,
Best that we for deth dispone
Eftir our deth that lif may we;
Timor Mortis conturbat me."
Right at about page 165 of this book I stopped and made a comment on my goodreads group's "currently reading?" thread in which I said that it seems that everything has been laid out by now, and I'm stumped.  Looking back on it now,  it turns out that I may have jumped the gun a bit there thinking I had all pertinent information, but I still had no clue, and continued to remain in the dark until the very end.   This book is hands down one of the twistiest and strangest crime novels I've ever read, which is a good thing; at the same time, I had to really work at this one which raised my level of frustration more than once.
The main action takes place, as the blurb for this book states, "in the depths of a howling winter night"  in a "remote castle isolated in the Scottish Highlands."  Down below Glen Echany is the village of Kinkeig where, when news came of the suicide of Randalf Guthrie, current laird of Echany,  "there was little grieving."  In fact, as we learn right away, "folk hated his very name."   This information comes from Ewan Bell, the shoemaker of Kinkeig, who lays the groundwork for this story and introduces us to the somewhat strange Guthrie and the castle's inhabitants (niece Christine, Hardcastle the sinister-seeming factor and his wife) before turning over the narration to others who will "tell of their own part in it."  Someone somewhere (maybe on goodreads? I don't remember now) mentioned "Rashomon-style," but for me the telling was much more in the vein of Wilkie Collins' The Moonstone.  By the end of the story, four other people will offer their voices to the furthering of the tale:  Noel Gylby, a young man on his way home to London and ends up "benighted" at the castle with the young woman whose car he crashed into during a blinding snowstorm;  Aljo Wedderburn, attorney; John Appleby, detective-inspector from Scotland Yard and finally the "testament" from "the doctor"  before the narrative is handed off once more to two people already heard from.  Here's the thing:  piecing together their individual accounts, it seems that perhaps there is much more going on here than Ranald Guthrie simply taking "his own ungodly life" -- and yet, if it wasn't suicide, then what exactly happened that night?
The title of this book derives from a poem written by William Dunbar (as this brief article notes, one of  "a group of medieval Scots poets known as the makars" -- or "makers" ), and according to Christine, it is  often chanted by her uncle as he roamed about his castle.   The haunting last line of each stanza "Timor mortis conturbat me" (fear of death disturbs me") adds to the already Gothic-ish atmosphere provided by the setting, the overall strangeness that pervades this novel, and even the sighting of ghosts by various people.  While it was written during the Golden Age, it comes across as an example of an atypical story of this time, which I actually prefer. For me it's a case of the stranger the better.
I quite enjoyed Lament for A Maker, which aside from its bizarre story appealed to my puzzle-solver self who loves a challenge, and I definitely got that here.  I will also admit that the joke was on me more than once, when I thought I had figured it out and really hadn't,  but I'd much rather things go that way than actually solving a mystery early on.    Aside from Innes' The Mysterious Commission which wasn't a John Appleby novel, I haven't read any of his other books, so I'm pretty stoked to read more right now.   Yet, as noted earlier, I did have to put a lot of effort into this one. My main issue with this book is that  it's not often that I sit with my iPad at the ready while reading a mystery novel -- that's usually what I do while reading nonfiction or more esoteric, out-there kind of books --  but here it was almost a necessity, at least at first,  since the entire first chapter was offered in a Scots dialect causing much frustration and necessitating multiple google visits.  It took me a while to warm up to this story, but in the long run, it was well worth it.
Readers who make it through that first chapter will find a fine puzzler here, so don't give up.
Posted by NancyO at 2:35 PM