Well just crap.   I've been using the list of books from the Séptimo Círculo collection as my main crime/mystery reading guide this year; only four books in and thanks to my own stupidity, I read the wrong book.   I was going to read Anthony Gilbert's The Long Shadow, written in 1932, and completely neglected the date (and obviously the real title)  and bought his Death Casts A Long Shadow, from 1959 (originally published as Death Takes a Wife).  It's no surprise; here at casa mia our 2020 hasn't ended yet with what feels like a quarterly extension.    So today I went to double check what title was up next, and discovered my mistake.  I feel really stupid for being so careless, and now of course, I can't find a copy of the 1932 book anywhere.
Moving on, putting aside this morning's long facepalm session,   I'd finished reading Death Casts a Long Shadow earlier this week.  Anthony Gilbert, one of the pseudonyms of Lucy Beatrice Malleson, aka Anne Meredith (Portrait of a Murderer: A Christmas Crime Story) and J. Kilmeny-Keith, wrote a whopping fifty-one novels featuring Arthur Crook, and this book is number thirty-four.  I seriously hate starting this late in the series but it is what it is.
Nurse Helen Wayland has decided after some brief ribbing from her friend Miles Gordon that she needs a change in assignments from elderly patients "more prone to qualify for a death certificate" to a "case with some prospects of survival."   So when Blanche French slips on the stairs in her home,  breaks a leg and refuses to go to the hospital, she calls the agency to request the nurse who'd looked after her earlier when she was down with a bad case of the flu.  Unfortunately, that wasn't possible, so Helen is sent instead.   The French marriage had started out well enough with wealthy Blanche  helping Paul in his legal career and providing for his every need,   but over the  "nearly ten years"  that Paul and Blanche had been married, her "sense of insecurity"  had caused Blanche to become overly needy, resenting Paul's time away from her for any reason. 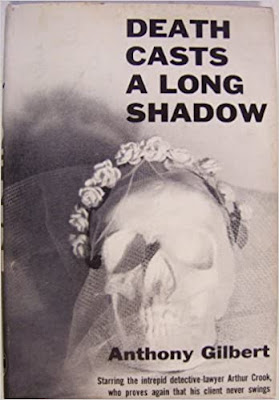 When Helen arrives, Paul falls for her at first sight, and over time she begins to feel the same for him.  One Wednesday night, when it's nurse's night off,  Blanche and Paul have a raging argument; later that same night Helen and Paul meet  and are seen together by the French's housekeeper, Mrs. Hoggett.  With everyone back at the French home much later,  "the night exploded in tumult" as Blanche ends up dead, having been shot.   An inquest is held, and it looks as though Paul might have had a hand in Blanche's death,   but based on the evidence given at the inquest, there is "insufficient proof" to charge him and he goes free.  All of this is just preamble -- we haven't yet come to the meat of the story.
Paul and Helen are caught up in the wake of the scandal that follows; they go their separate ways and after a year as things seem to be dying down,  find their way back to each other in London and marry.  But things go horribly wrong once Mrs. Hoggett, now a shopkeeper in a seedy part of the city,  comes back into the picture, threatening to tell a completely different story than the one she provided at the inquest unless she's paid to keep quiet.  Murder rears its ugly head once more, and the investigation into this death will unearth, as the cover blurb notes, "an intriguing network of facts" for Arthur Crook,  the "intrepid detective-lawyer" who has agreed to take the case.
It's an intriguing and ingenious puzzle that is worked out over the course of this novel; the author also offers up a bit of sleight of hand that merited a silent "bravo" toward the end.  And while I don't want to go too far here,  let's just say that aside from the crimes in this story, the author also  spends a lot of time thematically on examining different types of love that have the power to either make or break a marriage.    Then there's this: when Crook reveals all about the case at hand, I actually said out loud "but what about" ... (and trust me, if you read this book you'll have the same question running through your own head throughout your time with this novel) and the answer appeared on the next page.  Voila -- perfect sense of timing.
I have no other experience with the character Arthur Crook to know how Death Casts a Long Shadow fares alongside the other novels, but this one had me unwilling to set the book down for any reason. Once again I find myself saying that someone really needs to republish these old books; this one was quite cleverly done so I can only imagine that the others might be just as good or even better.
definitely recommended for those who are into older British mysteries and older mystery fiction in general.
Posted by NancyO at 2:30 PM