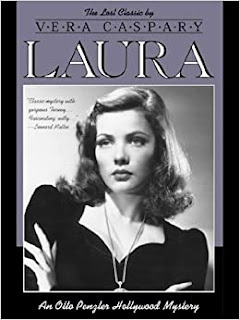 9780743400107
ibooks, 2000
236 pp
paperback
I meant to post about this novel some time ago, but in between my reading of the book and now, there's literally been an avalanche of things going on here that have required my focus elsewhere.  I also had  to really consider how to talk about this novel,  sort of mentally pulling my hair out over how not to give too much away, which is no easy feat.   Let's face it -- if you've seen the movie then you're already aware of the surprises in store,  but I am going to try to  avoid mentioning any spoilers here just in case. As a result, this will be reading journal post light. I hadn't seen the film until I'd finished reading the novel (just standard operating procedure), and while I enjoyed the movie very much, for me reading the book is the better experience by far.
Like most crime/mystery fiction I enjoy reading, Laura is a complex,  twisty and suspenseful story that moves beyond the realm of standard whodunits into the more literary zone where human nature is put under a microscope.  And oh my -- the range of psyches in this book definitely merit close examination.   At the center of this story is Laura Hunt and the people in her immediate orbit, and then there's the detective on the case who discovers her only after she's been murdered.
In telling this story, Caspary uses a series of first-person narratives, utilizing, as A.B. Emrys reveals in her essay "All My Lives: Vera Caspary's Life, Times, and Fiction" (which does not appear in my edition, but as an afterword in my Feminist Press edition of Caspary's Bedelia, 198), "the Wilkie Collins method of multiple narrators."*   These begin on a Sunday with the account of  well-to-do (and quite snobbish) columnist, collector and aesthete Waldo Lydecker,  as he finds himself grieving over the "sudden and violent" death of his friend Laura Hunt the previous Friday night. Violent death  indeed -- Laura  had been shot at close range on Friday night in her apartment, the buckshot also severely damaging her face.  On that last day of her life, she  had announced to her fiancé Shelby Carpenter (to whom she was supposed to have been married the next Thursday)  that she would need  "four or five days of loneliness" before the honeymoon, especially after having launched her latest successful advertising campaign.   She still planned on having her weekly dinner with  Lydecker that evening, after which she would catch a train to Connecticut where she had a house, returning on Wednesday.  But for some unknown reason, Laura  had canceled her dinner date;  evidently she had changed her mind at the last minute.   Assigned to the case of Laura's murder is Detective Mark McPherson, the second narrator, who had learned from Lydecker that if he wants "to solve the puzzle of her death," he must first "resolve the mystery of Laura's life."
In attempting to do so, McPherson listens to what the other men in her life have to say about her, but he also develops a personal interest in Laura as well. He comes into the case viewing her as "just a dame" until his interest grows slowly into obsession, taking his time, for example, to go through her apartment, touching her clothes and possessions as a way to understand her.  It is mainly through the gaze of each of the men in this novel that we see Laura, but the author has also included a narrative in which we discover her true nature, that of a "modern" and fiercely independent person concerned about being her own woman, having "given so much of everything else," but always withholding herself, with too much to lose otherwise.  While the story does eventually reveal the "who," in my opinion, it is the question of why that is much more pertinent:  what exactly was it that made Laura a target for murder?
I did say that I would not post any spoilers, but the truth is that I could seriously go on forever about this book because there is so much to tell.   Unfortunately, that would involve spilling much more about the characters, about the story and about the twists involved throughout, and that's not going to happen here.   I did feel that the author sort of tipped her hand in one very telling scene making it easy to figure out the who far ahead of the actual solution, which was a bit disappointing, but in the long run Laura is a definite no-miss, and not just because of the crime element -- it is much more a study in character that brings out a number of issues that remain pertinent today.
Don't miss the film, although quite honestly the book is so much better.
As I said, reading journal post light.
*9781558615076
Feminist Press, 2005
Posted by NancyO at 11:49 AM