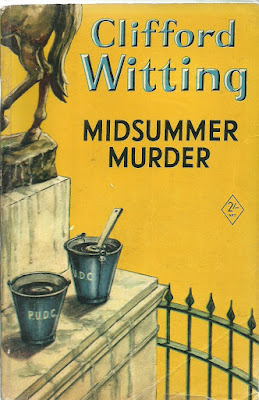 #16 on the Séptimo Círculo list, Clifford Witting's Midsummer Murder  brings me back to crime reading once again , although I had hoped to have read much more of that list by now. I've fallen so behind in everything that I'll likely spend the rest of the year catching up.  Oh well.

Hodder and Stoughton, 1953
originally published 1937
184 pp
paperback
I went looking for older, contemporary reviews of this novel after finishing it, and in  googling "Midsummer Murder Witting" without the quotation marks, got thousands of results for Midsomer Murders.  I was a bit annoyed at first but then laughed because even though this book has nothing to do with Tom Barnaby and the gang from Causton CID, there is a character in this story who reminded me of Mrs. Rainbird from The Killings At Badger's Drift (which I recently read with a group on goodreads).  Not unlike that creepy lady who spied on everyone in her village in Caroline Graham's book,  there is a woman in this story who keeps a card file on everyone in her village.  I guess the Mrs. Busybody must be a reality in some villages; on the other hand, both Barnaby and the Inspector in this book, Harry Charlton, came to a point where information gleaned from these  respective sources became invaluable.
Midsummer Murder is book number two in Witting's Harry Charlton series, which begins with Murder in Blue (1937).  I had to really go digging online for a copy of the edition of Midsummer Murder I have, but luckily, it seems that I won't have to work as hard to pick up the series opener, since the people at Galileo Publishers have seen fit to put that one back into circulation, to be released (at least here in the US) next month.  Pre-ordered, for sure, along with his Measure For Murder (1941, book #5).  His Catt Out of the Bag, book #4 from 1939 is already available for purchase, so I bought that one as well.  As all of this buying might reveal, I liked the lead character, Inspector Charlton.  I didn't particularly love the book itself, but the man intrigued me to the point where I would like to read more of his adventures in crime solving.  As for the novel, I was more than mildly annoyed with the underlying motive that connected all of the crimes (yes, there are more than one), which to me was tenuous, at best.   As an aside, anyone in 1953 who wasn't quite sure of the definition of that word could have easily turned to their Thorndike-Barnhart dictionary advertised on the back cover: 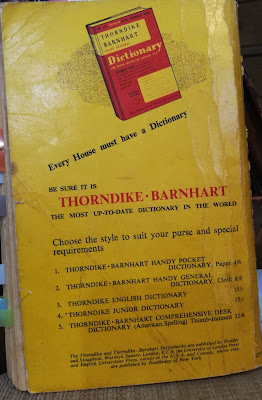 The story begins with a shooting in the Paulsfield Village square on market day, the first Tuesday of the Month.  Set between the wars in 1936, it was close to noon "and the tumult of the fortnighly gathering was at its zenith," including  all manner of livestock which "bleated, grunted and lowed," salesmen calling out their wares, a Punch-and-Judy show going on with a barrel organ for competition and construction complete with pneumatic drills.   It's a bustling, chaotic scene, and in its midst a bull escapes, and at that moment someone decides to let go with a gun and kill Thomas Earnshaw, the man cleaning the statue mid-square.

Inspector Charlton is called in to investigate, but finds an appalling lack of clues other than the bullet, a determination of the angle at which it had been fired into the victim, and sightings of a mysterious van that may or may not have something to do with the case.  All he can do at present is to talk to everyone around the square to see who might have a gun matching the murder weapon.  Progress on the case is little to none, and when a second person falls victim to the same fate, he reasons that

"the murderer either had his intended victim playing right into his hands, or ... was waiting there like a watchful, blood-lusting spider for some innocent sacrifice to come along."

Even worse, there is a third victim, and yet no one knows if these people had been randomly chosen or if there was some sort of link between the three in a "larger prearranged plan."  The killings have caused people to remain in their homes causing havoc for the shopkeepers, and while the police are starting to make connections, the question of who is responsible remains a mystery and leaves  the Paulsfield Sniper to remain at large.

As this is my first experience with Clifford Witting's mystery novels, I have no idea whether or not he does this in all of his books, but here he leads the reader on quite a merry chase through the police investigation before we realize at the very end that we've been had in a nice bout of misdirection.   And I was fine up until that point, enjoying the mystery, putting the clues together in my head and even taking notes while reading.  Normally the author's sort of "gotcha" moment is a good one, meaning that he or she has put together a story whose solution I never would have guessed because I was following the trail of red herrings.  And while that happened here, when the killer was disclosed it was so out of left field that I had to go back and reread certain chapters just to try to figure it out.  Still, it was fun up to that point so I can't complain too much, but somehow that final moment  just didn't seem fair.  Be warned that this book ends so abruptly that I was looking for evidence that some of the pages had been torn out of my copy.

Not great, but not bad, sort of middle of the road with an interesting lead character.  In my mind, not quite as nicely done as the previous  Séptimo Círculo books, but still a good read.