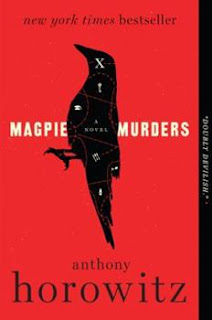 9780062645234
Harper Perennial, 2018
495 pp
paperback
I hadn't intended on reading this book just yet, but after my post about The Shooting Party  one of my goodreads friends commented on the fact that people were wowing the use of the book-within-a-book format  in this novel while technically, as he pointed out in his review of Magpie Murders,  it had already been done by Chekhov over a century earlier.  His remarks, along with all of the high ratings for this book, did the trick and my copy came off the shelf.
The aforementioned book-within-a-book is called Magpie Murders,  the newest and final installment of  author's Alan Conway's mystery series featuring his German detective Atticus Pünd.  Editor Susan Ryeland begins her tale by giving her readers a warning: "This book changed my life."  The changes she notes are not minor ones -- she  loses her job, "a great many friends," and she no longer lives in her "quiet and comfortable" flat.  She also states that "it was all down to that bastard Alan Conway," whose books she had "always loved," but not the man himself.   But before she can explain the why behind that statement, we are immediately plunged into the small, quiet village of Saxby-on-Avon, 23 July 1955, where a funeral is being planned for Mary Blakiston, who had fallen down the stairs at Pye Hall where she had worked as a housekeeper.
Two weeks later, a young woman by the name of Joy Sanderling has come to meet with the great detective himself, asking him to come to Saxby-on-Avon to help clear her fiancé's name.  Robert Blakiston, Mary's son, has been getting the evil eye from many of the villagers after his mother's death,  and she is convinced that "they all think he did it."  She would like Pünd to "look into it" and to reassure everyone that Mary's death was indeed an accident, and "that there was nothing sinister going on."  Pünd turns her down, but later changes his mind when he reads an article in The Times about the death of Sir Magnus Pye.  As he says, "Coincidences do occur," but it's not likely that there would be "two unexpected deaths in the same house," so it's off to the village he goes, where he joins the Detective Inspector to investigate both cases.
I have to say right here that I was intensely following this case, and then just as Pünd says that he has "everything I need to know" about the case and I turned the page, the story comes to an abrupt end and we're back in the now with Susan Ryeland.  "Oh no!  "I yelled out loud at this juncture, when I realized, along with Susan, that the last chapter is missing.  I hadn't figured it out at all, and by golly, I wanted to know who killed Magnus Pye.  But then things changed, as Susan discovers that Alan Conway was dead and that it looks like he'd left a suicide note behind.  Her boss, Charles, tells Susan that his copy was incomplete as well, and that there were no missing pages to be found anywhere.  Susan needs to find those pages -- the publishing house had not been doing so well and they "needed" Conway's book to "make a hit."   As she begins searching for the ending of Magpie Murders, she also decides that it might be worthwhile to do a bit of sleuthing herself, to see if indeed Conway's death had been a suicide.
While I had some minor grumbles about the writing here, including some of Susan's detecting skills and choices that seemed rather hollow and Horowitz's ego writ large on the page (mentioning probably every TV show he's written the screenplays for) that caused more than a few eyerolls, I still couldn't put this book down. But then the author does something unforgivable that made me take issue:  while Susan says that as an editor she doesn't care for "coincidences in novels" (and quite frankly, neither do I as a reader), that is precisely where Horowitz goes with this book.  Honestly, it felt like he'd written himself into a corner and had to do something to get her on trajectory to finish this story.
I know that this novel gets sterling reader reviews, so it's probably just me being picky again.  On the plus side, this book kept me entertained for hours, and  I loved the 1955 story.  It's the modern one with which I have issues:   it's not nearly as well done, and ultimately ended in a kind of letdown for me mainly because of the author's choice here to depend on coincidence.  Not a good move in my mind, and I felt cheated. I also have to say that once the reasoning behind Conway's death was revealed, it didn't seem at all like a big deal and certainly not murder-motive worthy.  I will still recommend it, but as Susan Ryeland says at the beginning of the book, "Unlike me, you have been warned."
Posted by NancyO at 11:53 AM