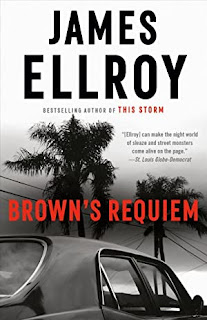 9780593312209
Vintage, 2021
originally published 1981
321 pp
paperback
(read earlier)
I hadn't really intended to read more of Ellroy at the moment, but back around mid-August I read his My Dark Places and there he was, back in my head and under my skin again. The only way to exorcise his presence was to read more Ellroy, and I decided to start with his earliest work.  Brown's Requiem is his first novel, followed by Clandestine, and I read both.
In the introduction to this edition of Brown's Requiem, Ellroy notes from the outset that he was "determined to write an autobiographical epic second to none," but he also realized that his life was "essentially an inward journey that would not lend itself all that well to fiction," which, based on his life as described in My Dark Places,  is probably true.  His response:

"I then ladled a big load of violent intrigue into my already simmering, tres personal plot -- and the result is the novel you are about to read."