Back Country, by William Fuller 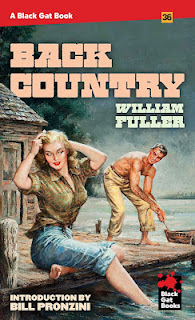 9781951473594
Stark House, 2022
originally published 1954
197 pp
paperback
Newly out this month, Back Country is yet another entry in Stark House's Black Gat series, "the new face of vintage mystery."  Originally published in 1954, this book is the first of six to feature Brad Dolan, described by Bill Pronzini in the introduction to this book as

"Hardbitten veteran of two wars, with a checkered past in which he ran guns from Tangiers to Saudi Arabia and smuggled aliens into the Louisiana marshes from Mexico. Former advertising exec embittered by the blatant infidelity of his ex-wife Dusty. Adventurer who resorts to violence and to skirting, bending or breaking the law when circumstances warrant. Wanderer whose primary ambitions are fishing and 'blue water, sunshine, and freedom..."

He also enjoys classical music and "can talk a little Nietzsche."

During his service in Korea,  Dolan's leg had been badly injured, and he'd been stuck in a ditch for seventy hours in minus-thirty conditions, after which he decided that he never wanted to be cold again.  Making up his mind that he'd either go to the Southwest or to Florida, a letter from a friend inviting him to Miami cinched the Florida move, so after a stint at Walter Reed hospital and a medical discharge, he was on his way.   After having left Highway 41 to make an inland crossing to the east coast, he made it to Carter County when his car threw a rod.  He made his way to a  town named Cartersville ("the Florida the tourists never see"), not  exactly his idea of the Florida paradise he'd been aiming for, but in need of a mechanic, he's pretty much stuck at least for a while.  It doesn't take long before he finds himself in trouble at a backwoods juke where he offers to buy a gorgeous blonde a drink, gets knocked out in a fight and wakes up in time to find himself taken to the county jail.  Turns out he chose the wrong blonde ... she's the wife of Mr. Rand Ringo, who pretty much owns the county, "lock, stock and barrel."  Ringo needs someone like Dolan to run his operations, someone with "know-how and intelligence and guts," and thinking he can cut himself in on some of the  action, Dolan decides to stick around for  a while.  He's given money and a place to live, and it seems that Mrs. Ringo has taken a liking to him and becomes a regular visitor (wink wink nudge nudge).   That's before he falls for Ringo's daughter, once again "getting jammed up with women," which seems is a weakness of his.  Not only is he caught between a rock and a hard place in that arena, but when Ringo tells Dolan just what he wants him to do, Dolan's not having any of it.
Subplots follow and tie in to the main storyline, and as promised in the introduction, there is definitely an "explosive climax."   Dolan's got guts and a brain, but above all he's definitely not someone who can be owned, making for a nailbiter of a showdown.
Just so it's clear, given that it's the 1950s and especially given that the story is set in central Florida,  racist comments run through this novel that are extremely difficult to read, but as Pronzini notes in the introduction, racism is endorsed neither by Fuller nor by his creation, Brad Dolan.   And speaking of central Florida, I live in south Florida and have been in the area of the fictional Cartersville many times  and his sense of place, even today, is spot on.
Back Country sold out its first printing -- half a million copies within three months. I can see why -- it's a powerhouse of a novel,  especially for a first in series. This is serious pulp goodness that should not be missed.   There are no dull moments and I spent much of the time wondering how the hell Dolan was going to get himself out of the predicaments he finds himself falling into.  He's an awesome character and more importantly, Fuller was an awesome storyteller, enough so that now I have to find the other five books.
My many and grateful thanks to Stark House for my copy of this novel.   Definitely recommended.
Posted by NancyO at 4:38 PM