The Embezzler, by James M. Cain 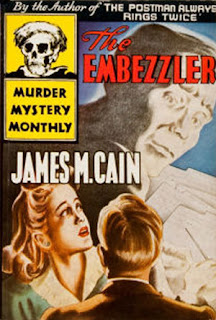 Avon Book Company, 1944
(Avon Murder Mystery Monthly No. 20)
originally serialized as "Money and the Woman" 1938
108 pp
paperback
Ask someone which books they've read by James M. Cain, and my guess is that the answers won't likely include this book, The Embezzler.  Actually, until I started reading my way through the séptimo circulo list, I didn't even know it existed, and I'm sure I'm not alone here.
Set in the Los Angeles area, bank vice president Dave Bennett has been sent from the home office to a Glendale to check up on "not what was wrong" with the Anita Avenue branch, but rather "what was right with it."  The ratio of savings deposits to commercial was "over twice" that of any other branch, and he'd been tasked by his boss to find out "what the trick was" so that it might be something that could be used at the other branches.    When the novel begins, he's working as acting cashier.  The man responsible for such great numbers is the head teller, Charles Brent, but  Bennett likes neither his method nor the man himself, the latter for reasons he doesn't quite understand.
Two weeks after Bennett arrives, he receives a phone call and a visit at his home from Charles' wife Sheila, who has a strange request.  Charles, it seems, needs an operation immediately to repair a duodenal ulcer, "verging on perforation," but he is worried that things will "go to ruin" at the bank if he's not there.  Would Bennett let her take his place at the bank?  She's definitely qualified, having worked at the bank in the past, and she knows "every detail" of her husband's work. As he considers his answer, it strikes him as a good idea, not only because of the "general shake-up" Brent's absence would cause, but also because he'd "liked this dame from the start."   So Sheila's in, and one day while she's out trying to bring in a loan, Dave takes over her window and discovers just that Brent's work success hides something else -- an $8500 discrepancy in the books.  Even worse, he discovers that Sheila knows all about it, but he's in love with her -- what to do?   Everything rests on Dave's decisions from this point on.
By this point in the novel, I already had a feel for what was about to come, and for the most part, I was right.  What kept me reading wasn't so much the action here but my deep  mistrust of Sheila pretty much to the end so I had to see what happened on that front.  I mean, Cain had  already written Double Indemnity, albeit in serialized form (1935 -- it also appears along with The Embezzler in Three of a Kind in 1943)  so I couldn't help but wonder if Dave's judgment would be clouded by his instant infatuation with Sheila, or if she was going to turn out to be another Phyllis Nirdlinger taking Dave down the road to destruction.  No spoilers from me on that score.
All in all a decent read, but I was more than a bit disappointed with the ending which one reader on goodreads described appropriately as a "major no no" for noir.   No spoilers from me, but jeez -- given all that had come before it just did not work.   Think "sappy" and you've pretty much got it.

I would love to watch the film made from this novel in 1940, and I found a place that has transferred it to dvd, mine for only $25. Done, making me a happy person.    Unfortunately the shipping was like $45, making me an unhappy person,  so I guess I'll wait and hope to find a copy another time.

If you're a fan of James M. Cain's books and want to read beyond the better-known novels, this would be a good place to start; in any case it's much better than his The Cocktail Waitress, which was just sleaze, and not good sleaze at that.  This one was just okay.