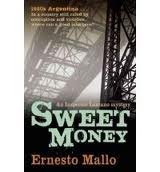 You seriously could have knocked me over with a feather when I heard (from the author, no less!) that Inspector Lascano would be returning after Needle in a Haystack. There are plenty of recaps in this book which describe the action in Mallo's first Inspector Lascano novel, so I won't take the time to explain; suffice it to say, it seemed wildly improbable that there could be a sequel.  But thank goodness there is (although now I'm hard pressed to figure out how Lascano will return in a third book!), and it's a good one.

The blurb on the front cover says the following:


"1980s Argentina...In a country still ruled by corruption and violence, where can a good man turn?"

That is precisely the question, one to which Venancio Ismael (Perro) Lascano will have to find an answer. Since the action of Needle in a Haystack, Buenos Aires has become a different city.  State-sanctioned terror is over, talk of democracy is in the air, and sadly, denial that there was ever a "Dirty War" is floating around the country's officialdom.  Several veteran military officers have been given their walking papers in favor of newer, younger ones. A segment of the police department known as "The Apostles" (who themselves deal in the profitable drug trade)  has finally come to power by killing the man to whom Lascano owes his life. And worse -- his best friend and Eva, the woman he loves, are no longer in town, and Lascano has no clue as to their whereabouts.  Having lost his protector, Lascano is set up as a target by the Apostles, and a hit is put out on him.  While he's busy trying to save his own skin, with the help of the few friends left from the heyday of his police career, he also comes to realize that he's got to get out of town.  His opportunity comes after a bank is robbed by recently-released criminal nicknamed Miranda the Mole, who is himself eager to get out of the criminal life, just settle down and make up lost time with his family. This robbery was to be Miranda's criminal swan song.  But there's a problem.    It seems that a large sum of money has gone missing that shouldn't have even been at the branch that was robbed, and Lascano is hired to get the money back discreetly.  With the sum he's offered, he could leave and focus on finding Eva and try to start his life over.  But of course, things are not going to be so easy.

Once again, Mallo has managed to capture a portrait of a city, as well as a country, in transition, one in which old scores still remain to be settled.  And even though there's not much room for an honest cop like Lascano, there's another person to take note of -- the Public Prosecutor, Marcelo Pereyra, who is keen to take on

...open cases, a series of crimes committed by the military during the dictatorship that have never been brought to trial or punished, that have been bogged down in a series of laws and contradictory decrees, in many cases unconstitutional...


Marcelo is also working on cases of the children of those who disappeared -- and all roads seem to lead him to Lascano's old nemesis, Major Giribaldi.  One of the questions that arises is how Marcelo is going to provide justice within a system that is still corrupt, where he works "in opposition to the government's lack of political will to prosecute criminals in uniform."  He's a very interesting character, and at times reminiscent of the prosecutor in Roncagliolo's Red April, who also wanted to do honest work within the scope of a corrupt political environment.  The characters are all well drawn, even the bad guys, but there is just something about this prosecutor that really stands out.

At times Sweet Money is sad and even a little heartbreaking, especially when discussing the children of the disappeared, but it's also a story that has a bite, enough to satisfy anyone who enjoys the mix of crime and historical fiction.   The way Mallo puts his conversations in italics is clever, conveying the feel of real conversation without interruptions. It's punchy, to the point and the reader is drawn to it because of the way it is set apart from Mallo's regular prose. The reader is drawn right away into the story, and there are enough places within the novel that summarize the action of Needle in a Haystack so that if you haven't read it, you'd at least get the gist of it.  I personally recommend reading it before this one, especially because of the characters' backstories. Plus, it's a great crime fiction novels set during the Dirty War.

Once again, all I can say is "yay!" and I understand there's going to be one more book to feature Lascano.  Sweet Money is a very welcome addition to my crime fiction library, and it's also a good historical fiction piece as well. It's gritty, down to earth and the writing is excellent. Definitely recommended -- one you should not miss.
Posted by NancyO at 4:16 PM