My first entry in my mini-series I call "What Would Montalbano Read?", taken from the series written by Andrea Camilleri.

Tattoo is actually the second book in the Pepe Carvalho series, following Yo maté a Kennedy of 1972.  Normally I have this compulsive need to begin with book one in any series, and even though I can read Spanish pretty fluently,  starting with Tattoo  is fine by me.  It's a mystery novel, skirting the edge of noir yet not as edgy as one would expect in that particular genre.  Although Montalbán is known to be one inspiration for Andrea Camilleri's Inspector Montalbano series, the main character, Pepe Carvalho, is much darker in character than Camilleri's protagonist, and this novel is not at all as lighthearted as Camilleri's in tone, although it does have its moments.

The basic story revolves around the discovery of a drowned man floating in the ocean and the search for his identity.  Shortly after the dead man is pulled on to the shore, he is turned over on his back, where onlookers discovered he had no face -- it had been eaten away by fishes.  Quickly turning him over once again, a child discovers a tattoo on his shoulder blade reading "Born to raise Hell in Hell."  Senor Ramon, a local hairdresser and businessman, hires Pepe Carvalho to discover the identity of the dead man, and "what he did in life." He refuses to explain why he wants to know this information, and is willing to pay Carvalho handsomely for his time.  The investigation will not only  lead Pepe to the Netherlands and to the seedy back streets of Barcelona, but will leave him black and blue in the process.

Carvalho is an interesting character who touts himself as being "an ex-cop, an ex-Marxist, and a gourmet."  He also worked for the CIA at some point.  He's in love with a high-class prostitute named Charo, who he admires partly because she always "wolfed down her food like a growing adolescent," since Carvalho believes that "nobody who is indifferent to food is to be trusted."  He helps protect her prostitute friends, despising  their pimps. He has a library of some 3,500 books on his home shelves, and uses their pages for fire kindling.  In Tattoo, he burns Lain Entrago's Spain as a Problem and even Don Quixote, although he's sad to see the pictures go up in flames in Cervantes' work. He's also a consummate gourmet who loves food, eating and a good wine to go along.  Carvalho is a man of little, if any, ideals: he  works "enough to live," prefers work to politics, and could care less about technological advances his field and considers himself "not even neutral...aseptic" about politics.   But he has his negative qualities as well: he's a  blatant sexist and a little strange, tending toward violence  -- in one scene, for example, he bullies a woman into giving him information by threatening to stick her head into the fire, and then when she delivers, he takes her to bed.  I sense some complexity coming in future installments of this series, and I'm not yet sure what to make of this odd man.  I can applaud him for some things, but for others, he's disgusting.

The plot  is so-so, although the mystery aspect keeps the reader focused on the story, especially while Carvalho is in the Netherlands. Some of those scenes were downright funny while some prompted the reader to wonder why he goes through what he does there.   I mean, you want to keep reading and find out who the dead guy is, why he was killed, and above all, why his identity is important to the owner of a hairdressing shop.  The action moves quickly,  but it's Carvalho's outlook on life and on Spain that are the most interesting facets of this novel.  It makes for interesting and intriguing enough reading that I've already ordered the next one in the series, The Angst-Ridden Executive, which is also published by Serpent's Tail, and recently found a few more that I didn't realize I had  hidden on my international crime fiction tbr shelves.

Would I recommend it? Yes -- it's more than readable, with its lightly-plotted storyline and  the thread of mystery running through the novel, but beware of the oddness of Carvalho's personality in a few places.  He's definitely not a character for everyone. 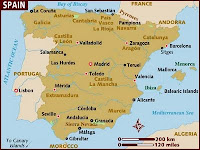