Inspector Erlendur on the big screen


Yesterday my husband left for California on business for a week; the only good thing about him having to be gone so long is that I have lots of time for watching movies.  Last night there were two: one called Deep Red, a film in the giallo genre of the 70s; and Jar City (Myrin), made in 2006, both streamed  from Netflix.


I wasn't expecting the Erlendur of the film, although once I got used to him it sort of worked.  More along the lines of how I pictured them in my head while reading were the characters of Sigurdur Oli and Elinborg: 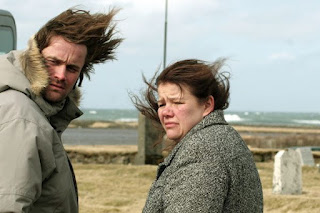 Directed and written by Baltasar Kormakur, the movie opens with a dad (Orn) at the side of his daughter in the hospital, where just as he's singing her a lullaby, the scene switches to a cemetery where the same lullaby is being sung by a chorus at her funeral.  Her death sends Orn into a deep depression; he's also obsessed with tracking the genetic trail of her disease, doing so below the radar, hacking into the new and controversial national genetics database (which, by the way, exists and is controversial in real life). In the meantime, Erlendur, along with Sigurdur Oli and Elinborg, is investigating the death of a smarmy lowlife whose body was discovered by two little boys.  What captures Erlendur's attention is a picture of a grave, and it is this picture that will ultimately lead him back to the past and find the killer.  As Erlendur and his colleagues are on the trail, he also has to contend with his daughter Eva.

If you've read the book there are no surprises; what really takes center stage in this movie is the Icelandic landscape. From the city to the most isolated house next to the sea, Iceland is at the same time beautiful and bleak, and is shown from several views. Just watching this movie made me want to bundle up in a warm blanket, and the wind is a constant background noise.

Only a couple of minor niggles here: the movie might have had more punch without all of the background music.  The choral music at the beginning and the end of the film is beautiful, but during the film it takes away the drama in many of the scenes where no music would have equally sufficed.  I also got a bit confused with the flashbacks -- I normally love flashback scenes but they're sort of just cut in here in weird spots.  It took me a while to figure out what was going on because the flashbacks seem like they're happening in current time with nothing to signal the change.


Otherwise, there's very little to get in the way of the plot, and there are even brief moments of humor. It's an enjoyable film, noirish in tone and gets right into the nitty-gritty of police work and solving the crime. I liked it.

Next up: the Irene Huss movies; I'll be interested to see if my picture of her matches what shows up on the screen.
Posted by NancyO at 10:45 AM