Nights of Awe, by Harri Nykänen

The bodies certainly pile up in Nights of Awe, Harri Nykänen's first foray into the series featuring Ariel Kafka of the Helsinki Violent Crimes Unit.  Nykänen is no fledgling writer -- he has several books under his belt, including his Raid series, which was the basis for a TV show  in Finland, which I found totally by accident while researching European television shows to watch, leading me to check out Nykänen's work, which ended up sending me to this book.  Funny how that works.

Nights of Awe is a good series opener, a very serious police procedural where the solution doesn't unravel until the very end.  It's a  no-nonsense story, with a different approach to Scandinavian crime fiction  that takes place during the ten days between Rosh Hashanah and Yom Kippur known as  Yamim Noraim, or Days of Awe.  The main character is Ariel (Ari) Kafka, 40, unmarried, Jewish,  first and foremost a policeman, then a Jew.   As he notes,

"If Rabbi Liebstein was right and the world was falling to pieces, an unpleasant role had been reserved for me. It was my job to gather up all of the gears that were flying off and repair the clock so it would work again."


And considering that by the end of the novel there are eight people laying dead, all connected to one case, he's got his work cut out for him.  The first two bodies are discovered at the railyard in Linnunlaulu, one having been shot and the other had fallen or had been pushed from a bridge onto the  top of a passing train. All kinds of theories are put forward as to the nature of the killings, but Ari knows it's much to early to think on the theoretical side.  There are few clues at the scene other than a cell phone needing a password to unlock it and a map from Hertz. As the detectives begin their investigation, more bodies turn up, and it isn't long until an inspector from the Security Police (SUPO) gets involved, much to Ari's dismay.  The clues lead to an Iraqi refugee, his co-worker and his cousin, a known drug dealer, but the tabloids are linking the killings to terrorism either on the part of Israeli political extremists or Arab terrorists. In the meantime, Ari's brother and a spokesperson for the Helsinki Jewish congregation believe that the deaths are linked to a terrorist plot to blow up the synagogue during the High Holy Days, during which, coincidentally, the Israeli foreign minister is paying a visit, a theory bolstered by the involvement of the head of security of the Israeli embassy.  Sorting  out these theories and getting to the truth  in the face of pressure being heaped on Ari  from several directions is going to be difficult at best.

Nights of Awe is ambitious, to say the least, but it's a good start to what will probably be a good series to follow.   The writing is straightforward with little to get in the way of the plot -- no long sessions of interior monologue expressing the main character's angst, for example, but at times it can get a little confusing as body after body piles up and new plot developments are revealed little by little. Ari's character is portrayed realistically, but some of the supporting characters are kind of just there in the background. This isn't necessarily a drawback, but rather a reflection of a first novel in a series where the lead character is the focus.   And while there is a lot of action, it's sort of secondary, where the crime has already happened rather than say, a car blowing up in front of the cops' noses.

I have to admire how the author handles two major issues: first, in the treatment of Jewish attitudes toward Israeli politics, he notes that there are some who have misgivings about Israel's policies toward its Arab neighbors,  but he also takes at look at things from Israel's point of view.  Second, the author gives a fair treatment of the Muslims in this novel, especially when the police turn to the Imam of the local Islamic center for assistance, rather than accusation.

I do have a couple of niggles: first, there is very little in the way of sense of place here.  Maybe it's just me, but after all of the Scandinavian crime fiction I've read, very little of it takes place in Finland, so it would be nice if the reader was able to absorb some of the local scene.  A sense of place adds a bit more credibility as well as another dimension to any story; this is one aspect of the novel where the author fell short. I'm sure that will be rectified in coming installlments and it's definitely not a deal breaker as to whether or not I'll pick up more books by Nykänen in the future, but it is worth mentioning. Second: Mossad? Really?

In spite of my minor complaints, I'd recommend it to readers of Scandinavian crime fiction, but with the caveat that it's not the usual Nordic fare that most readers have already experienced. It's also dark and very serious  in tone, so it's definitely not for cozy readers or readers that are looking for something lighthearted.  I don't mind dark, and I'll definitely be ready and eager to read the next book when it's translated. 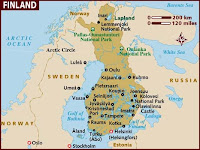