Nairobi Heat is the first novel to feature Ishmael Fofona,  a detective working in Madison, Wisconsin.  The book moves from the US to Kenya and back again,  while the next book in the series, Black Star Nairobi, reverses the journey in a roundabout sort of way. While the author has developed some pretty intricate plots, both books focus largely on Ishmael and the world around him as seen through his eyes, both as an African-American in the US and in Kenya.  The books  explore complicated issues of identity, morality, and justice, especially those defined vis-a-vis geography and ethnicity.  They are fast reads that will keep you turning pages, and although they are both filled with fast-paced action and political intrigue,  for me the inward focus on the characters was much more rewarding. 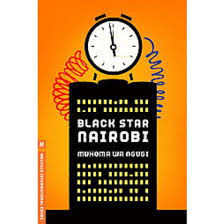 
If there was a yearly award honoring most violent fiction, Nairobi Heat would have certainly been on the longlist, and two years later  the author would have been on his way to the podium to give his acceptance speech for the even more incredible amount of bloodshed he writes into Black Star Nairobi.  To be fair, while I don't particularly enjoy these sorts of  violent crime/conspiracy thrillers, there's something in these books that kept me reading -- and for me it comes down to the main character and the issues the author explores through his writing, and interestingly enough, violence is one of them.  Personally, I'm more of a motive person -- what I look for when I read crime is an examination of what brings someone to the point of doing what he/she does --  and from that perspective (for the most part),  the author's exploration of character are more than satisfying in both novels.

Madison, Wisconsin is the starting point for Nairobi Heat.  A young white woman is found dead at the doorstep of an African man -- an act which Detective Ishmael predicts will be  "the story of the year."  In the wee hours of the morning, Ishmael is called to the scene in Maple Bluff, a "little tax haven" which has its own police and fire departments but no detectives.  Inside the house is Joshua Hakizimana, a Rwandan who currently teaches "Genocide and also Testimony" at the university.  Hakizimana is lauded as a national hero who'd turned his school,  "An island of sanity in a sea of blood,"  into a sanctuary during the Rwandan genocide, and who helped numbers of people escape over the border to safety.  Now there's a dead girl on his doorstep, and Hakizimana denies any knowledge of her or how she came to be there.  There's nothing about Joshua to initially arouse any suspicions; the police officers outside find a needle half full of heroin that had evidently gone into the dead girl's arm, so it looks like a straightforward case.  Yet the more Ishmael thinks about it, the more he begins to feel that something doesn't add up -- that there must be some connection between the dead girl and Joshua. As he notes, "He may be a hero somewhere in Africa, but he's mixed up in this shit somehow."  At home after work, Ishmael receives an anonymous call where he learns that if he wants to the truth, he needs to come to Nairobi, where he would find that "the truth is in the past." His chief gives him the okay after two weeks of pleading, and off he goes to Kenya, where he meets the man who will eventually become a good friend and colleague, David Odhiambo, known as "O," as well as a beautiful woman called Muddy, and they begin navigating the alleys, streets, bars and the wealthiest enclaves of Nairobi to get to the very ugly truth behind the young, unknown woman's death.


Black Star Nairobi picks up Fofona and O about three years later.  Ishmael has relocated to Kenya, where he's fallen in love with Muddy and he and  O have formed an investigative partnership called the Black Star Agency.  They've taken on "some of the strangest cases," but they're not doing so well at making a living. When they are given a case to work on involving a dead man in the Ngong forest, they take it, needing the money.  Ishmael will later come to regret it, especially after a powerful explosion rocks Nairobi's Norfolk Hotel, and they realize their dead guy may have been somehow involved when some American  CIA agents become interested, believing the bombing may have been a terrorist act.   When O remarks that "this shit is way over our heads," Ishmael agrees, but they both realize that they need the money, and they will just work their original case. Everything else would have to remain "background music, no matter how loud it got."  The Norfolk explosion, however,  sets off an incredible series of events, leading to personal tragedy and a no-holds barred, personal search for the perpetrators, while in the background, shady presidential politics triggers a "vortex of violence" pitting ethnicity against ethnicity in wholesale slaughter.

Once you start to get under the surface of these plots in both novels,  you discover that these books are not your average political thrillers. Nairobi Heat has a much better, more tightly-plotted and credible  core mystery that takes the reader into the world of the Rwandan genocide and its aftermath; Black Star Nairobi focuses on the hunt for a shadowy group of men for whom the lives of innocent people mean nothing and who are powerful enough  behind the scenes to manipulate world politics and individuals.  While Black Star Nairobi has a much different feel than its predecessor, the main action moving more along a political thriller line, it also offers the reader a peek at the effects of hatred that creates cultural gaps that keep a nation divided.  It's like in coming to Africa, Ishmael finds some of the same issues he thought he'd left behind in America, but defined  in Kenyan terms on Kenyan turf.

In both books, it's the characters that take center stage; in  Black Star Nairobi, the characters from Nairobi Heat are much more developed and the reader sees them coming to terms with just what they're capable of and how they try to maintain their individual senses of humanity when faced with situations that would try a saint.  Ishmael, the narrator in both novels,  provides insight not only into the people in his immediate circle, but into himself as well.   For example, before he was a cop, he understood that  "being black, poor, and urban meant you were the scapegoat that no one cared about;" after joining the force and working in Madison where he stood out in a "sea of whiteness," he notes that the "stink of racist policing rubbed off on me and some family members called me a sell-out to my face." He also admits to having done some things "in order to stay alive," but that when it came down to it, he had no "innocent blood" on his hands:

"For me it was always in self-defense or in the defense of someone else. I had come to know that I was good with violence the same way a boxer realizes he is good with his hands -- in and outside the ring I was aware of the rules, and whenever possible I followed them."

Ishmael admits he "hadn't felt American for a long time," and that in reality, he hadn't wanted to.  As far as his friend O, he's a guy who realizes that sometimes to get justice, it is necessary to try to understand and play within the rules of the "fucked-up moral code" of the bad guys.  There is a duality at work in O, one where "evil and good were compartmentalized in him," where he


"worked in the world of nine-to-five; he was happily married and always came home at the earlierst possible moment. However, when we entered the world of thieves and murderers, he fit right in and he followed their rules as often as he made and broke them."

Ishmael wonders what will happen if O ever becomes "unhinged" and that well-cultivated compartmentalization completely breaks down.

All of  the  main characters are excellently portrayed, and there's plenty of the "what-makes-them-tick" thing going on that for me elevates these novels beyond the average thriller. The author's ability to sustain an ongoing and vibrant sense of place is amazing, especially as viewed through the lenses of Ishmael's experienes and his examination of people  than through the normal details that some authors stick in their stories hoping to convey certain nuances that don't always come off well.   The books are very well written, and there is much improvement from Nairobi Heat to Black Star Nairobi. I preferred the core mystery of Nairobi Heat much more than the who's-behind-the-bomb plot of the second book, because it seemed much more realistic and credible; it's a shame that the author had to come up with that whole twisty, conspiracy plot to showcase his excellent characters. However, readers who are into that sort of thing will probably find more of what  they like in Black Star Nairobi.

Other readers of Nairobi Heat  have noted that the whole idea of a Madison cop traveling to Africa to solve a case is farfetched -- well, ok, maybe, I might agree there. I particularly didn't care for blanket race generalizations, but that's a personal thing.   However, from a casual reader standpoint, I can recommend both books, but they are definitely not novels  for the cozy crowd or for people who like upbeat endings or stories -- that's simply not the case here.  They are both thought provoking and what the author has to say will stick with you for quite a while.  I'm still thinking about these books, and I finished them both over a week ago. Now I'm hoping that I'll see more of Ishmael, O and Muddy very shortly.