*The Square of Revenge, by Pieter Aspe

Ahhh, the joy of finding an entirely new crime fiction series to read is unmistakeable, especially as it's summer. The Square of Revenge, by Pieter Aspe, is the first in a series of novels to feature Inspector Pieter Van In of Bruges and it's the first book of the series to be published in English.  The next book, The Midas Murders, is slated (according to Amazon) to be released December of this year in the US -- and I've already preordered it.  Considering it's the first in a series, it's pretty darn good.

What appears to be a robbery at an upscale jewelry store has police puzzled. Everything has been cleaned out, giving the crime the earmarks of an ordinary burglary, but there are no signs of forced entry. The security company has a taped record of the store owner's son saying he will be switching off the burglar alarm, but he was away all weekend and left no such instructions. The safe had been opened, quietly and professionally.  Finally, it turns out that all of the jewelry had been put into a bath of an acid solution called aqua regis, which pretty much destroyed everything.  On top of everything else, when Pieter Van In's superior calls him about investigating the crime and then later decides that the case should be shelved because of  politics and the owner's (Ludovic Degroof) disdain of publicity, in Van In's mind, something doesn't add up.  All Van In is supposed to do is to supply a police report, and the case is technically to be over.  The deputy prosecutor, Hannelore Martens, however, thinks otherwise, and insists that a public radio appeal be made to elicit any help from potential witnesses.  She hands Van In an envelope with her contact details, and he notices that it is addressed "for you, bastard," and contains a 5-word square of Latin words, setting him on an investigatory track toward a motive based on revenge.  His idea is reinforced when later, Degroof's grandson is kidnapped and held for an even more bizarre ransom, but trying to get the strange and eccentric Degroof family to talk or to level with Van In is like pulling teeth, even though one of their own may be in danger.  He is also hampered by the politics surrounding various players in the investigation and those at a higher level.

The summary on the top of the front dustjacket blurb calls this novel "heart-pounding," and while it's good, I probably wouldn't have described it that way.  While there's a good story here with more than one puzzle for the reader to work out, it's really the characters that drive this book -- especially the lead, Van In.  He's beyond good at what he does, is well respected by his coterie of police friends who know him well,  and has worked his way up the ladder to assistant commissioner and head of the Special Investigations Unit.  He's hates "small-minded intrigue," and is a bit tired of the kinds of cases that normally land on his desk, since "spectacular crimes and real tension were a rarity." Divorced, in debt, and a heavy smoker, he is often sidelined by his boss's son-in-law, whom his boss tends to put on the more sensational cases, only to be bailed out by Van In when there's a problem.  He also has no problems breaking or bending the rules when the need arises.  He can be snarky, which is a good thing, and though he has some measure of personal angst, it's not's worn on the sleeve like so many other protagonists in other crime novels.

Not to give away the show, but  the message left behind at the jewelry store hints at the Knights Templar, and I do have to say that when I saw this, my first thought was "Oh no, please don't go down that alley."  Fortunately Aspe didn't. I just wanted to get this out there so no one balks when they get to that part and to let readers know that there's no trace of  The DaVinci Code revisited here.  My only issue with this book is that as the story headed toward the big finish, things started happening at a lightning-quick pace that seemed downright implausible.  While generally I set my brain mode to "suspend disbelief" when I read most crime novels, events buzzed by so fast (on the part of the police) that the action became downright implausible. I get that the time frame is a bit narrow here but still. Otherwise, I was pretty happy with this first entry into a new series, and can't wait to start the next one.

Readers of lighter crime fare will probably enjoy this book, although as I said earlier, much of the subject matter is not what I'd recommend for those who like cozy mysteries.  On the other hand, if you're looking for something gritty and edgy, you won't really find that either -- The Square of Revenge lands somewhere in between and makes for a good intro into a new series and a new set of characters to watch. 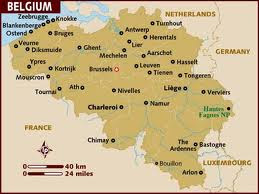