In Barcelona: The Summer of Dead Toys and The Good Suicides, by Antonio Hill


The Summer of Dead Toys finds Salgado back home in Barcelona, back  after being forced to take a leave while on probation, for letting his temper get away with him during the investigation of a human trafficking case.  Now that he's back, he hasn't forgotten why he was sent away, and neither have his superiors. The first case that hits his desk is that of nineteen year-old Marc Castells, son of Enric Castells, a successful businessman whose name has been mentioned more than once in connection with "a couple of right-wing parties" that would "like to have him in their ranks."

Marc's fall from an apartment balcony was ruled an accident, but the mother who abandoned him as an infant isn't so sure. She wants someone to "dedicate more time" to her son's death, and Salgado's superior Savall tasks him with quietly asking a few questions in this "unofficial" case.  As Salgado and his partner Leire Castro start making the rounds of friends, family and anyone else who might have known Marc, they also start noticing things that just don't add up. When a second death occurs, they know that there's much more here than meets the eye.  They begin to piece together what little information they can gather, and soon it snowballs into a complicated case where  "the threads ...  seemed to be multiplying, pointing in different directions..."   In the meantime, Salgado also comes to realize that his business with his former nemesis in the human trafficking case is still very much unfinished.

Told via several points of view, The Summer of Dead Toys is a good, challenging mystery that eventually brings the past under present scrutiny, and has as two of its main themes personal responsibility and justice.  There is one point in this book where Salgado asks a very pertinent question:

"Justice is a two-way mirror...On one side it reflects the dead and on the other the living. Which of the two seems more important to you?"


He can make allowances -- even though he's volatile and quick to anger, he also appreciates what his co-workers and friends do for him when things aren't going so well.  But one of his best qualities is that he is a seeker of truth and knows that "there's only one truth, for the living and the dead." This trait, along with his need to be a good dad after having had such a terrible one, helps to define who he is in the world.

There are more than a couple of subplots that keep things interesting, and the ending, without spoiling things, leads nicely into Hill's second series installment, The Good Suicides, although here's a classic Catch-22: I can't really say much about one major subplot of the second book without ruining the first. 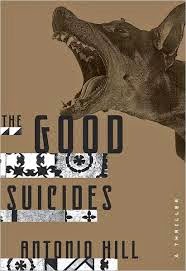 hardcover;
received from the publisher via "Blogging For Books" in exchange for a review


A phone call in the wee hours of the morning brings an already-awake Hector Salgado down to the metro station at  Plaça Urquinaona, where it seems that a woman identified as Sara Mahler has committed suicide by jumping into the path of an oncoming train.  A kid stole the dead woman's cell phone, but was made to return it by his brother, who handed it over to the police.  The only thing on the phone was a photo showing the weirdest thing: three hanged dogs suspended by ropes in a tree, captioned with the words NEVER FORGET.  Investigating Sara's death, Salgado and his new partner Agent Fort (taking Leire Castro's place since she's on maternity leave) discover that Sara worked for Alemany Cosmetics.  At Sara's apartment, Fort discovers a photo of Sara with a group of her co-workers at a team retreat, and recognizes someone in the picture -- Gaspar Rodenas, who the previous September, had killed his wife, their fourteen-month old baby and then himself. When a third employee dies, Salgado knows that somehow all of these deaths are connected -- and that they all have something to do with the bizarre photo of the dead dogs in the tree. But what? No one is talking, yet he strongly intuits that some kind of cover up is going on.   While Hector and Agent Fort are busy trying to uncover the significance of the strange photo of the dogs, Leire Castro is bored on her maternity leave and wants something challenging to occupy her time.  She decides that a certain missing persons case is just the ticket, and convinces a friend in the police to get her the files.  She starts combing through them, and although she's supposed to be resting, what she discovers is enough to set her ennui aside and get out and investigate this case -- one that she knows is near and dear to Hector Salgado's heart.  These two major narratives alternate with the points of view of the group from the retreat, who hold the keys to the secrets behind the deaths.

In The Good Suicides, the author reaffirms Salgado's focus on justice and his need to root out the truth, no matter what.  As he says to one of the characters in this story,


"...little by little the truth rises to the surface ... That's what my work consists of. Bringing the truth to light, exposing it for everyone to see. And I assure you, I enjoy it."

The more he tries to ferret out the real story, the more guarded the principals involved become, frustrating Salgado to no end.  Yet as he's trying to piece it all together, he's also trying to be a good dad to his teenaged son, which in turn makes him reflect on certain events in his past, and how that past had a bearing on who he is now.

While I have a couple of issues with this book, overall, it's a pretty good read.  I like this inspector, I like the way Mr. Hill writes, and above all, I like how he uses the past as a catalyst for what happens in the present. This is best exemplified in his Summer of Dead Toys, although it's also the case here, albeit with a shorter time span.  And in both books, the revelations are surprising -- I never guessed the who or the why at all.   However, as I said earlier, I found  The Summer of Dead Toys to be a better read than The Good Suicides. Normally it's not this way -- usually I expect the first novel in a series to be a little rougher since the author hasn't quite got his characters fully fleshed out or he/she hasn't quite settled into a style of writing.  In both books, the reader feels like he/she's known Salgado for a while already, since his character springs into life pretty much right away.   Both books also contain  an interesting and very challenging mystery at the novel's heart that once revealed, gives the reader an understanding behind the crimes that take place in that story.  The real problem for me  in The Good Suicides is all of the extraneous stuff that could have been left out with no problem. First, there's a superfluous storyline about one of the men at the Alemany company who is engaged to the owner's sister who allows himself to be seduced by his soon-to-be sixteen year-old stepdaughter.  Not only does it have no place in this story, but I mean, come on! A possibly-incestuous affair? Major turn off.  Second, I know that characterization is key, and I get that a big focus in these two novels is on parenthood, but I could have also done without Leire's  repeated musings on Tomas (the baby's father) and  on how she'll be raising her baby.  Aaarrrghhh! Maybe other readers are really into this sort of thing, but for me, it just detracts from the main storylines and is actually a distraction when I'm much more interested in why these people all died and how Salgado is going to shake loose the truth.

In the long run, however, if and when another Inspector Salgado novel comes out in translation, I'll be shelling out the money to buy a copy.  There's still a HUGE unfinished and ongoing plot element to be explored that I'd like to see through to the end, and as I said, I've come to like this guy.  And I have to say that I think it's very funny that in both books, when there are crimes committed with guns, Mr. Hill makes some sarcastic wisecrack about Americans and their love affair with guns. He's right on the money and it's interesting to see one little peek into how Americans are perceived abroad, well, at least in that area.  So yes, I'll be clicking that buy button when the next one comes out. 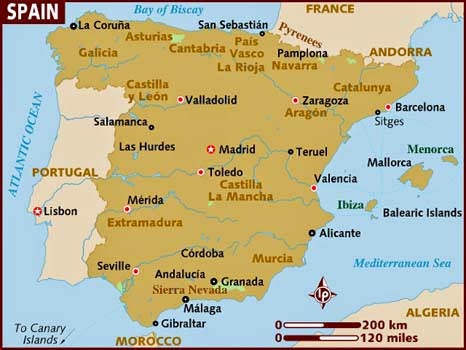