"There are matters one deals with, and there are those one avoids like the plague."

Since I've been reading so much eurocrime lately, I decided to take a break and move to another part of the world with Morituri. The author, Yasmina Khadra, who might be recognizable as the writer  of The Swallows of Kabul (a book I freely admit to never having read), is actually a former high-ranking Algerian army officer named Mohammed Moulessehoul.  Using this pseudonym  allowed him the freedom to "avoid military censorship" as the bio blurb in the back of the book states. He left Algeria in 2000,  and it wasn't until 2001, as an exile in France, that he publicly revealed his true identity.  Morituri is a very dark book, with zero light in the telling, but aside from some issues with the translation, it's a very well-written crime novel that takes the reader right onto the streets of Algiers during its civil war.

Morituri   may  be among the most atmospheric of novels I've ever read.  Set in 1990s Algiers,  the reader immediately becomes immersed into the dangers that exist on the streets.  For the main character in this book, Police Superintendent Llob, even the most simple act of getting to work just might be his last.  He has become a "privileged target" in a city where the cops have to "disguise" their routines as a security precaution. Firemen recovering corpses are blown up because bodies are often booby trapped. The city is under a zealously-enforced curfew, random bombings are nothing new, and people in high places are  bought and paid for. Islamic fundamentalism is rearing its head in the city and throughout the country, and the civil war is in full swing.

While this novel is definitely an action-packed crime read, there's way more to it than simply following cops around in their investigations. For example, one of the main ideas espoused in this story is that the rise of Islamic fundamentalism is really a screen behind which the power/money brokers can elevate and assert their own financial interests.  Superintendent Llob is made all too aware of this underlying reality when he is tasked to  take on the thankless and, as it turns out, very dangerous task of finding the daughter of the highly influential Ghoul Malek. But it's what he doesn't know that should worry him -- here, nothing is at all what it seems to be.   Another facet of this novel is revealed as Llob and his assistant Lino take to the streets -- their forays take them from the protected  enclaves of the rich and powerful where the war " hasn't enough courage to risk encroaching on their domain,"  into impoverished areas torn apart by violence where fear and terror are constants.  It is a place, he tells Lino, where


"everyone is engaged in building palaces for their offspring and no one thinks of building a homeland for them."

Yet another big idea contained within this book is how an honest, upright  man can not only function, but also cope in this climate of raw corruption, terror, and fear.

Morituri is really an amazing novel, but the reading was really tough in places because of the  idiomatic  or other language choices used in translation that often threw me off.   I eventually learned to get over the translation issue, although it still made for a choppy read. Having said that, the book is very dark, very edgy, and the descriptions of Algeria during this time are just downright scary.  It is also a novel chock full of contrasts.  One  of my favorite parts of this novel is near the end, when Llob parks his car at the top of Notre Dame and looks out over the port.  He muses about the Casbah of the past filled with colorful people who were "all poor," but who "floated on the surface of harsh disappointments with a rare sobriety, keeping watch for the slightest light to be inspired by it."  Then right away,  he turns it around to the present,  reflecting on how memories became "deprived of the sun," and how evening had "settled in our hearts."   It's just that kind of writing that got me through the rough patches here.

I've already picked up book two in this series trilogy (Double Blank, Autumn of the Phantoms), so obviously this first book was good enough to merit the reading of the second installment.  This probably isn't a book for everyone, but readers of dark and edgy crime fiction should like it, once they acknowledge the language issues. 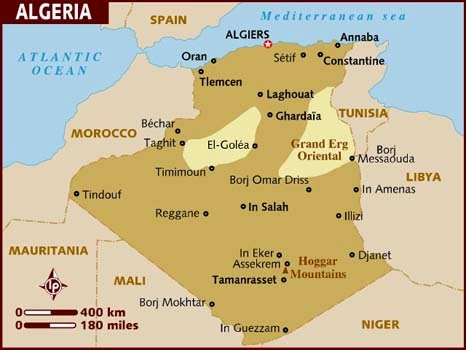