pop this one into your beach bag this summer: Mr. Mercedes, by Stephen King 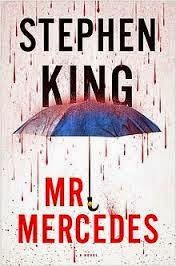 
Let me just say this and get it out of the way: there is nothing in the supernatural realm occurring in this story,  but there is a monster here. He is neither a vampire, nor a ghost;  he is not the dark forces of evil dressed up in a clown costume. He's just a person. And he got away with a horrendous crime.

Detective William (Bill) Hodges has recently retired, and sits watching mindless television day after day, often with a gun in his lap and thoughts of suicide not too far off.   When he left the force, he left behind a few unsolved cases he'd been working on, but the one that haunts him most is that of the Mercedes Killer, so named because he drove a big Mercedes into a gigantic crowd of people waiting in line behind ropes for the opening of a job fair (promising 1,000 jobs)  on a foggy morning, killing several including a baby.   But Bill's ennui is about to be lifted -- he receives a letter from someone who says he's responsible, telling Bill that since he is such a big failure, he should just kill himself.  The letter writer, who just  a few pages later we're told is Brady Hartsfield (aka the "Mr. Mercedes" of the title),  tells Bill that he can communicate with him via a very private chat/social site called Under Debbie's Blue Umbrella, where the "perk," as he calls himself, has already set up Hodges with a user name.  Bill knows that he should probably turn the letter in to his old partner Pete, but he's intrigued -- and he wants to nail this guy.  Rather than inspiring Bill to eat his gun, the letter gets his blood flowing again, and he decides to take this bad guy on -- but on Bill's  terms.

The usual King touches that are the hallmark of his books are here as well. King's forte is evil people who blend in to the community, and he does this very well.  On the outside, Hartsfield seems pretty average, working two jobs, well liked by his customers at both. On the inside, though, he's a really sick guy, with a bizarre relationship with his mom, recurring killer headaches, and lives in his own little basement world where he is into books, movies, and games that glorify violence. When things don't go his way, watch out. King writes him so well that I was happy to get out of the Hartsfield scenes, especially at his home, but he just gets worse the farther along the story goes. Also, while in pretty  much every Stephen King novel you can expect  the ultimate showdown between good and evil, as he's taking you to that moment,  he doesn't lead the story down paths one might expect.  Under Debbie's Blue Umbrella, for example, doesn't turn out to be the typical device for offering clues via chats between the killer and the cop, and two deaths move things in very different ways than originally planned.   The way the author throws in a few game changers along the way keeps things just a little bit off balance, so that you have to sort of re-evaluate what you think is going to happen next.

But aside from those Stephen King touches (and many others)  throughout the book, Mr. Mercedes has been done before. Here the reader finds very familiar territory:  there's the retired cop frustrated by the big case in his career that remains unsolved, the damaged bad guy working two menial jobs and  in a sick sort of love/hate relationship with his alcoholic  mother,  the Harvard-bound brainy and tech-savvy young sidekick helping the computer-ignorant cop, and of course, a romantic love interest.   There's no mystery here, really, since the "who" is given away very early on -- it's much more of a thriller where the race is on to stop the bad guy  before he can implement his next terrible plan, one that will make the Mercedes massacre look tame.

Mr. Mercedes is a good enough read for a lazy couple of  days in that  laying-on-the-beach kind of book-that-you-can-read quickly sort of way.  It's definitely a crime thriller with no supernatural elements involved, the perfect escape novel when you want something sort of mindless to read while you're relaxing in the summer sun. I'm afraid I didn't enjoy it as much as others seem to have, but  that's okay. I'm sure that even without my vote it will become a huge bestseller.
Posted by NancyO at 8:29 AM

Email ThisBlogThis!Share to TwitterShare to FacebookShare to Pinterest
Labels: thriller/suspense