according to the Guardian, Ruth Rendell's "five key works" : 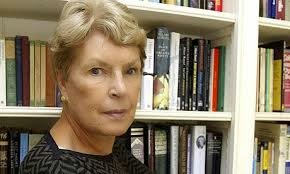 Ahhhhh. There is nothing so satisfying as a good novel by Ruth Rendell.  I've recently read (reread in some cases) five of her books that The Guardian noted as her "five key works."  In order as they are listed there, these are

I'll take them one at a time in my own reading order.

My personal favorite: A Dark-Adapted Eye.

There is just something so compelling and unputdownable about this dark novel, which opens with a puzzle.  As the narrator, Faith, notes

"In these circumstances alone one knows when someone is going to die. All other deaths can be predicted, conjectured, even anticipated with some certainty, but not to the hour, the minute, with no room for hope. Vera would die at eight o'clock and that was that."

So, you say, how can Faith actually pinpoint the time of Vera's death? The first clue comes when Faith reveals that Vera's death is the type which

"takes its victim, ...feet foremost through the floor, Into an empty space."

Clue number two: Vera's name is on the spine of a book along with those of Ruth Ellis and Edith Thompson. From just that small bit of info, Rendell (here writing as Barbara Vine) goes on to tell a story that illuminates that old adage that nothing is at all as it seems, and does so by alluding to bigger events to come while only providing tantalizing little bits of information until you've got the entire story.  It's those tantalizing little bits that will keep you moving forward in this most excellent novel.  I could go on all day about this book because it is so very good, but I have four more "key" works to go. Adam and Eve and Pinch Me is another great story, this written time as Rendell, but I wouldn't have been at all surprised to see Barbara Vine's name  on this one.  Adam and Eve and Pinch Me has that wonderful claustrophobic feel I love to find when I read, largely due to the fact that a lot of the action takes place in main character Minty's head.

Again - a wonderful yet cryptic and ultimately ironic opening:


"Minty knew it was a ghost sitting in the chair because she was frightened. If it were only something she'd imagined, she wouldn't have been afraid. You couldn't be when it was something that came out of your own mind."

Minty is a perfect example of a Rendell character -- she lives alone in the house left to her by her aunt. She suffers from what Rendell never specifically labels OCD and is obsessed with cleanliness, which is a sort of protection for her against the outside world which she does not navigate with much ease. Her mind, generally without her knowledge, also has a tendency to be what we as readers might consider her own worst enemy, but to her everything makes its own kind of sense.   The story begins in earnest when Minty meets Jock Lewis, who is, unknown to her, the ultimate con artist, and who, as part of yet another con, sets off a chain of events that affects several lives.  This is a story that asks its readers a number of tough questions, among them

and speaks to the idea about being unable to discern between fantasy and reality. As one character notes,


"After a while you stop distinguishing between the fantasy and what really happened; you don't know the reality anymore."

While reading, one might think this is only applicable in poor Minty's case, but Rendell points out that no, that's not exactly how it is. Stunning novel, and if you haven't yet read it, you are really missing an incredible story. As sad as this story is though,  A Judgement in Stone (in my opinion) takes first prize for tragedy. After I'd finished this novel earlier this year, I put the book down and just sat and stared into space thinking about the "perfect storm" of  misunderstandings in this story that collided to create utter catastrophe.   Once again, a stunning opening:

is the reader's first step into a most claustrophobic world of an illiterate woman and how her disability comes to set her on a path of sheer tragedy.  The book also continues the author's penchant for writing misfit characters -- and for me, this is really a huge part of the attraction. Another most excellent novel that I can definitely recommend.  I'm actually torn choosing between this one and A Dark-Adapted Eye for my real-world book group -- both would result in incredible discussions.

And now on to the Wexfords: Not in the Flesh appears on The Guardian's list, but personally speaking, I probably wouldn't have put it there. My guess is this book was chosen because of Rendell's involvement in stricter laws against female circumcision, which is a huge topic in this novel. Technically,

the topic of female circumcision in this book is sort of peripheral to the main crimes that need to be solved in this story, in which two bodies are unearthed in a wooded lot that is empty except for an old ramshackle bungalow.  The task of finding out who these people are, why they were killed and who murdered them falls to Wexford and his team.  This one is much more procedural in nature, and as such, not nearly as intense as the previous three I've just mentioned; for me, I'm much more partial to her more psychological novels than I am toward the procedurals.    Her portrayal here of just what makes various people do what they do, her character portraits and a mystery that goes back into the past are the highlights in this one.   Finally, and while last, certainly not least, there's her From Doon With Death, which is not only  the first Wexford novel but her first book in what I can only describe as a most prolific career.  For me, the book's major importance is in how we get a feel for 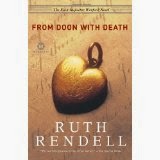 Rendell's method for her future works, in which the crimes prove to be much less the issue than her characters and their individual psychologies.  And, as in all of her books, Rendell does not fail to show how past actions continue to reverberate through the years and find their way into the present, usually with disturbing consequences.

So there you have it ... my favorites of this group are the first three, which I would agree definitely should be included in her key works.  At the same time, she has written a number of other most excellent novels that should not be overlooked, and I'm eagerly awaiting (and have already preordered) her Dark Corners, due out in October. I'm sure I will not be disappointed.