After having read a couple of novels fictionalizing the true story of Madeleine Smith, I was doing a little side reading and came up with a reference to this nonfiction book, Square Mile of Murder.  It's definitely what I call a "niche read," meaning it's probably not a book of interest to the general public but more for people like myself who are fascinated with this stuff.  This book contains accounts of four most infamous murders (for the time) which  occurred within in the space of just one square mile of Glascow between 1857 and 1909.

This book was made into a BBC production which I would kill to see, but like many other BBC offerings, is not available here.

While he offers readers detailed information about each case, the people involved, the trials and the outcomes, the author's main idea in this book is that "the one thread that links all these cases is respectability."  The first three murders he writes about  took place during the Victorian era, during which time Glasgow was "an intensely respectable city," a place where "respectability ruled the roost." The fourth crime took place in 1909, but the author includes it because "the spirit of his case is also Victorian."  Before even getting into the book then, the reader is clued that much of what he or she is going to read  is going to deal with class, status, money and contemporary morality,  and exactly how these elements all figured into and affected the outcomes of the four cases that happened within this "square mile of murder."  It is a wonderful, informative book and the author's writing style is such that often I felt as if he was actually engaged in a conversation here. For example, in the case of Oscar Slater, he relates the first description given to police by a witness, and says in the next paragraph


"Will you please put a book-marker in this page? As this strange case unfolds, it would be a good idea if you now and then turned to this original description of the man in the lobby."

His commentary is also quite witty at times, and he definitely makes his point stick about respectability and its role in all four of these cases. It is just a stunning book - one I can easily and most highly recommend.

Without going into great detail here about each case, I'll offer just brief summaries about the murders. For much deeper insight, there is a great two-part review of this book at a blog written by ten different crime writers called Murder is Everywhere.  You can also find a lot of pertinent info at another great website called The Murder Tree.

The book begins with the case of Madeleine Smith.  The daughter of an architect living in Blythswood Square, Madeleine fell in love and had a fling with Pierre Emile L'Angelier.  L'Angelier wasn't of Madeleine's class and was ten years her senior, but she fell for him all the same.  She met this man in 1855; by 1857 she was on trial for his murder. Even though she had sex with L'Angelier, it wasn't long afterward that she became engaged to a socially-acceptable and parentworthy man and now L'Angelier had to go.  It seems that she gave L'Angelier massive doses of arsenic in his cocoa more than once, but he ultimately succumbed. Sadly for her, he hadn't got rid of the multitude of letters she'd written to him; there was even a letter from her in his pocket when he died. In the author's opinion, L'Angelier died "because Madeleine wanted to become respectable," and at her trial, as the letters were read in open court, Victorian sensibilities were probably much more offended by her frank discussions of sex than they were by the fact of her lover's death.

The Sandyford Murder case occurred at 17 Sandyford Place in 1862. A servant at this home owned by the "passing rich" accountant John Fleming was found to have been quite brutally hacked by a meat cleaver  enough times to merit a comparison by Charles Dickens to the work of Lizzie Borden. John Fleming had left his elderly father (called Old Fleming) home with Jessie McPherson while he was away over a weekend.   On his return, John Fleming couldn't find McPherson, and his father said he hadn't seen her all weekend. Fleming goes down to Jessie's room and finds her dead.  The floor of the adjoining kitchen was still wet from having been washed, as was part of the bedroom floor; three bloody footprints had also been left behind.  Old Fleming noted that some silver-plate cutlery was missing; some of Jessie's clothes were also found to have disappeared.  At first Old Fleming was arrested for the crime, but the police began to focus their attention on a former servant and friend of McPherson's, Jessie McLachlan who was ultimately arrested just a few days after Old Fleming, who was then released.

Case number three is that of  "The Human Crocodile," aka Dr. Edward William Pritchard. Pritchard did away with three women, the first in May of 1863. He lived just around the corner from 17 Sandyford Place on Berkeley Street for the first murder (where a servant girl died in a fire), and while people who didn't particularly like Pritchard may have voiced their own suspicions about his involvement, he moved on. His family then moved to 22 Royal Crescent and took on another servant, Mary McLeod, 15, who he ultimately "turned into a concubine." 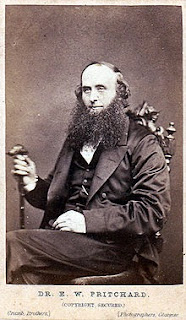 Pritchard was viewed as somewhat of a quack by his medical peers, and was accused of trying to seduce his female patients.  Moving again to Sauchiehall Street in 1864, by October Mrs. Pritchard started to become very ill.  Her husband put it down to "gastric fever," but funny thing -- while she was away visiting her parents in Edinburgh for the month of November through Christmas, her health greatly improved.  On her return, though, just after the New Year, she became ill again.  Her mother came to take care of her, but ultimately both Mrs. Pritchard and Mrs. Taylor died.  An anonymous letter to the authorities led to a police investigation, and Dr. Pritchard was arrested.

Moving now to 1909 and to West Princes Street, less than half a mile from the center of this square mile of murder, the author examines the case of Oscar Slater, who was wrongfully accused, arrested and imprisoned for the murder of elderly Miss Gilchrist, who was beaten to death while her maid was out buying a newspaper. The case turned on a diamond brooch that was missing from Miss Gilchrist's apartment and a tip to the police; some time later a man named Oscar Slater had tried to sell a pawn ticket for a diamond brooch, and then took a ship along with his girlfriend to America.  When he discovered that he was under arrest for Miss Gilchrist's murder, he could have stayed in America, but during his extradition hearing, decided that he would go back home to clear his name. Also going against Slater was the fact that he was a foreigner, but he went back, was arrested, tried and sentenced to hang.  What's interesting about this particular case is that the trial was a joke and that an innocent man went to prison. Although his sentence was commuted to life,  the case was later taken up by Arthur Conan Doyle who went through the evidence, and called for a new trial for Slater.  He published his findings in 1912 sparking a public outcry, but  even that didn't turn the authorities around. A policeman even  risked his career in order to get to the truth and try to get justice for Slater during a secret inquiry, but Slater wasn't released until 1927, and even then without his name being cleared.

Square Mile of Murder is now one of my favorite books and a prized addition to my home library.  Highly recommended to anyone who is, like me, fascinated by historical true crime.
Posted by NancyO at 2:22 PM