"a ballet of the wearing of the nerves": Deep Water, by Patricia Highsmith 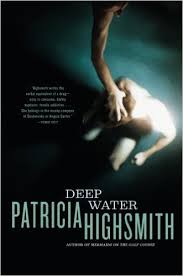 "...I don't waste my time punching people on the nose. If I really don't like somebody, I kill him."

So sayeth Victor (Vic) VanAllen,  the main character in Deep Water, which Highsmith described in her Cahier (via Andrew Wilson's great biography Beautiful Shadow) as  focusing on " 'the sniping, griping ambushing,' that can exist between people who are supposed to love one another, locked together 'in a ballet of the wearing of the nerves.' "  Frankly, that describes this book perfectly, but that "wearing of the nerves" is also a great way to describe how I felt during and after reading this novel. Once again, Highsmith had me feeling sympathetic toward a character not too unlike Tom Ripley; even though eventually I'm supposed to be outraged and shocked at things he does, it's still sort of difficult not to feel something for this guy.   I'm really starting to worry about myself here, and that is not a joke.  If there is one thing at which Highsmith excels -- actually there are many things but for me this one is numero uno -- it is her ability to make a reader to see things from the points of view of the psychopaths who populate her books. To them, what they're doing makes perfectly good sense -- we may not believe in real life that murder is any sort of solution, but somehow it's like you can seriously understand why her  people feel compelled to do the things they do.  I often find myself rooting for these people to succeed -- and then I realize that I'm cheering on a murderer who has not one  iota of conscience. But I can't help it. And that's why I'm a wee bit concerned.

The reason Vic comes across as a sympathetic character is because of his wife, Melinda. Vic runs a small but very successful press that produces only a few books each year, beautifully bound but dreadfully dull. The books that come from his press tend to reflect Vic's character -- on the outside he is well put together, but inside he is dreadfully dull, for example, raising snails as a hobby, also into such pastimes as "bee culture" and "cheesemaking."  Melinda, who doesn't at all share his interests, carries on with a number of men, flaunting them in Vic's face by either bringing them home and having them stay until the wee hours of the morning or not coming home because she's stayed with them; she also cares very little that their neighbors and circle of friends all get what's going on. Vic, whose philosophy is that


"everybody -- therefore a wife -- should be allowed to do as she pleased, provided no one else was hurt and that she fulfilled her main responsibilities, which were to manage a household and to take care of her offspring..."

realizes that because Melinda has a reputation for playing around,  he's acquired a near-saintlike reputation among their acquaintances, which as Highsmith tells us, "flattered Vic's ego."  However, he also admittedly has "an evil side," that he keeps "well hidden."  For example,  he takes near-joyous pleasure in telling one of Melinda's new boyfriends that he'd actually killed one of her previous lovers (referencing an actual murder that has been in the newspaper), a joke that turns into rumor and circulates through Vic's friends. It's not true, of course, but it sends the boyfriend running yet keeps him wondering.  Vic outwardly turns a blind eye to what's going on with Melinda and her series of lovers, but inwardly he's seething -- and this being a Highsmith novel, that pressure isn't going to stay bottled up for long.  When Melinda's latest boy toy is invited to play the piano during a neighbor's party, somehow he ends up dead in the swimming pool -- and Melinda begins to wonder if Vic may have had a hand in his death.

Deep Water is Highsmith's exploration of  "the diseases produced by sexual repression;" as she notes (again from Beautiful Shadow),


"From this unnatural abstinence evil things arise, like peculiar vermin in a stagnant well: fantasies and hatreds, and the accursed tendency to attribute evil motivations to charitable and friendly acts" (101)

and once again, she takes her idea and runs with it, this time creating a nearly-perfect study of a marriage that's stagnating and in decline. Vic is almost too perfect -- a great dad, househusband, sympathetic employer, and perfect neighbor -- as opposed to Melinda, whose flaws we see from the outset. It is definitely not hard at all to feel pity for Vic as he puts up with his wife and her multiple affairs, and this is really where Highsmith gets into my head.  I always seem to side with the "bad" guy; she makes it so easy to understand his point of view and actually feel a huge amount of sympathy for him.

Highsmith isn't for everyone, and as I'm discovering, it's becoming sort of necessary to space out reading her novels to maintain a measure of my own sanity. At the end of this one, I put the book down and walked away from it in a funk.  She has this way of burrowing deeply into my skin as she burrows into the minds of others -- and it's not always a comfortable feeling, even though so far, I'm absolutely loving her work.  It's not often an author can have that effect on me, but she manages to do so with every novel, at least so far.

definitely and most highly recommended.   Strangers on a Train or The Talented Mr. Ripley are her most famous books, but this one will definitely have anyone squirming throughout the story.