coming soon to a bookstore near you: Smaller and Smaller Circles, by F.H. Batacan 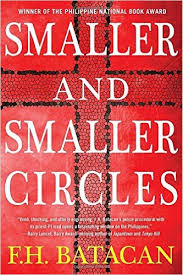 In the acknowledgements section of this book the author writes


"The first time I wrote this book -- in 1996, when I was in my mid-twenties -- I was angry: angry about my job, about the state of my country, about the callousness, complacency and corruption that had dragged it there.

The second time I wrote this book -- in 2013, in my forties, having moved back home with my infant son -- I found myself even angrier"  about the state of my country, which seemed even worse than it was in 1996, and about the callousness, complacency and corruption that kept it there."

I'm here to tell you that a lot of that anger shows up in this novel.  And that's a good thing. Let's face it...serial killer novels these days are a dime a dozen, so there has to be something to differentiate the good ones from the ho-hum and the same old same old.  Author F.H. Batacan has found the way to do it.  Her  book Smaller and Smaller Circles (out August 18th)  is not your average hunt-for-the-serial-killer story, but rather a look at how politics, corruption, the church, and the desire for power all get in the way of getting to the truth.  It also examines failure on the part of officials to take action because of the view that some lives aren't as valuable as others and just aren't worth doing anything about.  Heck, I got angry reading this book, and I don't even live in the Philippines.

Luckily, in this story, someone actually cares.  It's 1997, and the body of a young boy is discovered in the dump of Payatas, a place which, according to the blurb is  "northeast of Manila's Quezon city...one of the poorest neighborhoods in a city whose laws enforcement is already stretched thin, ... and rife with corruption." The boy has been eviscerated and the face peeled off. As it turns out, the discovery of this boy raises the body count of similar dead boys to six, a fact noted by Father Gus Saenz, a Jesuit priest who is also a leading forensic anthropologist.  Saenz, along with his partner and protégé Father Jerome Lucero, have been asked to help end this series of killings by Director Lastimosa of the National Bureau of Investigations (NBI). The director understands that the police are not very thorough, that "life is cheap in that part of the city," and that  "little police effort ... is expended toward following up" if the victims are not "wealthy or influential."  If the killer is to be stopped, it will have to be done a different way. However, the Director finds himself at times at political odds with the people around him, some of whom had been hoping for a different man for the position and who are antagonistic toward their boss.  Nevertheless, the Director is adamant that if anyone can help, it's Saenz and Lucero, but they too have their problems, including funding to keep their small laboratory going and the fact that those who head up the police departments refuse to believe that there are any serial killers roaming around. But Lastimosa, Saenz and Lucero have no time to waste -- once they've established a profile of their killer and determine a pattern based on death dates, they know that another killing is just on the horizon.   Saenz is also fighting the Church because of its refusal to sideline a child-molesting priest; the Church refuses to give the man over to authorities to face punishment for his crimes.  Smaller and Smaller Circles is the story of the efforts made to catch a killer despite all of the official (and other) obstacles thrown in the paths of the small handful of people who actually care.

The story is told via third-person narrative, interrupted every so often with the thoughts of the killer,whose identity remains hidden throughout the story.  Truth be told, this is the gimmicky part of this novel, but fortunately, being inside the killer's head only lasts for a short time here and there. Most of the book centers on the ongoing investigation, but the author manages to weave a great deal of social commentary into her story -- the lackadaisical attitudes of the police; the corruption which has been endemic to this country,  the crimes committed by the highest authorities and politicians in the country, the rampant poverty and extremely poor, often deplorable social conditions faced by many who live there, the connection between Church and secular politics, and much more.  In my opinion, Batacan has very deftly used the medium of crime fiction to give us her take on what's kept her angry enough to write this book.   I will say that for me, the discovery of the "who" was sort of an anti-climax, almost as if the author got to the point of having to tie the various storylines together but wasn't quite sure about how to do it.  On the other hand, it really didn't matter because like most novels I really like, it's much more about the getting there than the actual solution of the crime. I'll also say that Ms. Batacan writes very well, lifting this novel well above most serial-killer novels that are on bookstore shelves as we speak.

Smaller and Smaller Circles is, for serious fans of crime fiction, a book not to be missed.