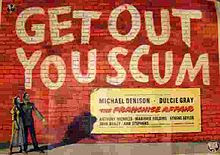 Through the miracle of my region-free dvd player, I watched the screen adaptation of Tey's The Franchise Affair over the weekend.  After its release, the 1952 New York Times reviewer called it "an hour and a half of sheer boredom," which was pretty much Mr. Film Critic's take on it.  (Mr. Film Critic is my husband, who is a good enough sport to sit with me through a lot of these old films, although he prefers comedy films and isn't really an old movie fan, although to his credit, he loved Double Indemnity when we went to a special TCM special screening a few months ago.)  My complaint is that a LOT of what makes Tey's  novel so great gets lost in translation when it hit the big screen.

I get that screenwriters can't possibly get every single nuance of an original story, but in this case, Robert Hall and Lawrence Huntington really missed the boat.  As one example, the big reveal of the case, the part where we discover just what sort of girl our young Betty Kane is, just falls flat, sort of defeating the purpose of the novel; it's also completely rewritten.    Another thing -- the tension that builds throughout the book as readers start to think that attorney Robert Blair is doomed to failure and that these poor women are going to land in prison just isn't there. In the novel you get to a point where you're just praying for some sort of miracle that will save the genteel Sharpes from life of hard time; not so in the movie version.  And one of the biggest scenes in the book is so completely lost in translation so much so that it's not even there.

While it was over all very cool to watch this book come to life, as in most cases, the original novel was better.  If you get the chance to watch the movie, take it ... it's still pretty good, despite my complaints.

Email ThisBlogThis!Share to TwitterShare to FacebookShare to Pinterest
Labels: page to screen