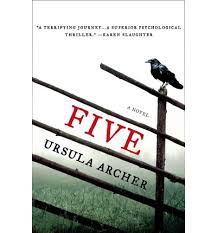 My thanks and my apologies to the publisher who sent me this a long time ago.  I must say, there's nothing like taking over a year to read an advance reader copy -- I'm so embarrassed I could crawl under my desk right now.  I shelved it, forgot about it, and well, there it is.

I was intrigued by the premise of this novel, which is that the discovery of a woman's body at the bottom of a rock face turns into a bizarre case involving geocaching, one that keeps the detectives of the Salzburg State Office of Criminal Investigation on the move while trying to decipher strange clues at different gps locations.  The dead woman provides the first clue; she has what turns out to be gps coordinates tattooed on the bottoms of her feet.  When the police arrive at the specified location, they make a gruesome find -- inside of a food container they discover a hand that looks to have been cut off of its owner with a saw.  Also in the container is a cryptic message about the next potential victim -- first name only, description, and a numerical puzzle they must solve to figure out the next coordinates.  It's like a macabre sort of treasure hunt where the only possible reward is finding the connection between the victims which will hopefully lead to the killer's capture, but of course in crime fiction, it's never that simple.

The geocaching element of this novel  I liked, something I appreciated in terms of making this book a bit different than a lot of other serial killer novels.  When all is said and done, using gps coordinates to lead the detectives on their hunt is a pretty good idea, and there's also a nice twist involved in the resolution of the story that I failed to see coming, which I also appreciate.  The novel also focuses on the "what-ifs" in different characters' lives, more than one of which has a huge bearing on the outcome of the story.

So, I knew that this was what I call a "gimmicky serial killer" book when I started reading it, and I picked it up just to have something that I didn't need to put much work into. It was sort of a sandwich filling kind of entertainment read for me, coming between some pretty hefty novels where I needed to pay serious attention to what was going on, and I grabbed it needing a brain break.  What I didn't know going into it is that it's also another angsty cop novel -- the lead detective, Beatrice Kaspary is mom to two kids, divorced, and has to offload her kids quite often because of the huge amounts of time she spends as a dedicated detective.   She is also at odds with her ex-husband, who never wanted a divorce and calls constantly around the clock  to complain about how her job interferes with taking care of their children and other things.  My psychic powers sense much domestic drama in coming installments.  What's really missing for me here is setting -- seriously, if I didn't know this book came from Austria, it could have been situated anywhere, and that was sort of disappointing.  Sigh.

All in all, adding the geocaching element was a good, original touch, one that kept me reading.  Aside from that, however, in the long run, I feel like I ended up with yet another serial killer/domestic drama sort of thriller that sadly (imo) seems  to be defining much of the genre these days.  I suppose it's what sells and it's what a lot of people want to read these days, so it is what it is.  For my own relax purposes, it sufficed. There are some gruesome descriptions, but thankfully, they're sort of after the fact and the author doesn't feel the need to dwell on the horrific details of exactly how things happened. That's a plus in my book, as is the  actual core mystery behind the killer's motivations,  which I thought was a pretty good one, although I wasn't a huge fan of the actual ending.   Readers who are much more into thrillers than I am will probably enjoy it; it's dark but not too dark, and I would say it comes closer to the police procedural end of crime than any other subgenre.
Posted by NancyO at 9:24 AM