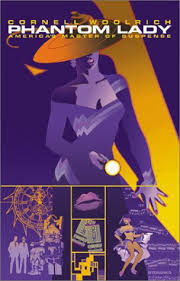 Cornell Woolrich wastes absolutely no time in throwing out a conundrum and starting this novel on the right foot: the first chapter heading states "The Hundred and Fiftieth Day Before the Execution," and in doing so sets up the first question. Who are we talking about here, and why is he/she on his/her way to the chair? By chapter five and the Ninety-First day before the execution (and we're still not too far into the novel),  it becomes very obvious that what we are looking at here is a virtual race against time -- only some few pages earlier, we were still reading about the "One Hundred and Forty-ninth Day Before the Execution."  The tension is set -- time moves faster as the story moves forward, although for the players, things are moving excruciatingly slowly.

On a May night, at "the get-together hour," a young man is walking the city streets with no destination in mind, "striding along with that chip-on-your-shoulder look." A flash of a neon sign decides the place for him and he ends up at a bar called Anselmo's. It's there he meets the woman with the unusual hat, "a flaming orange, so vivid it almost hurt the eyes." He doesn't know it at the time, but this woman will ultimately become his only alibi when he is accused of his wife's murder.  Unfortunately for Scott Henderson, the woman vanishes, and everyone with whom the two had come into contact on their evening out to dinner and then to the theater swears that Henderson was on his own -- that there was no woman with him at all. She has become to everyone but Henderson a veritable phantom.    As things go from bad to worse, Henderson is arrested, tried, convicted and sentenced for his wife's murder, and ends up in prison awaiting his execution. As the clock tick tick ticks away toward the execution date, ironically, Burgess, the cop who arrested him,  reveals to Henderson that he believes in his innocence. Two others join with Burgess in believing Scott -- a girl named Carol that he'd been seeing and Henderson's best friend, Jack Lombard, who  arrives in town only eighteen days before the execution and offers his help. Together, the three set out to prove Henderson's innocence; the question is, will they be able to find this phantom lady before it's too late?

Phantom Lady is an interesting and very good read from start to finish. It's much more than the usual "wrong man" scenario -- what really sticks out here are the dangling but slowly-diminishing hopes of not only the main character, but of those involved in trying to save him.   Every time there seems to be a breakthough, things go terribly wrong until Henderson is at "the last of anything," trying to convince the prison chaplain that he's not afraid.  It is definitely a book where the reader can't help but to get caught up in the ongoing tension; it is a novel where anguish is split between what's happening in the novel and what's happening in the reader's head. And trust me,  it doesn't stop until the very end. 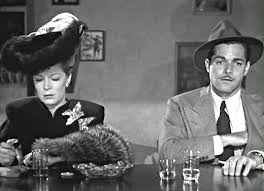 So now briefly to the film, which frankly, I didn't enjoy nearly as much as the novel, and which I didn't enjoy as much I have many other noir films. To be fair, the movie did convey that sense of being alone  that runs throughout the novel, and it did have its moments of greatness:  the use of light/shadow play that screams noir, the scenes with Ella Raines as Carol alone with the bartender of Anselmo's and then tailing him, working on his mind until the pressure becomes unbearable; the show-stealing drummer played by Elisha Cook Jr. ("do you like jive?") who relays a kind of ecstasy on steroids with only hopped-up body language and freakoutworthy eyes.  That phrase "the whole is better than the sum of its parts" seems appropriate here in describing how I feel about this movie -- that was pretty much it for what I saw as its best points.  I seriously found the actor who played Scott Henderson to be sort of blah -- one would think that in portraying a guy who is about to be executed, he'd give the role so much more, but in my opinion, he was just sort of flat. 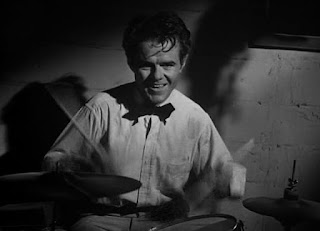 Not a huge fan of the adaptation either; say what you will, but to me this is a case where book beats movie by a landslide. The movie, to me, didn't have that same sort of  tied-up-in-knots, watching-hope-fade-slowly effect as the book. However, the worst, absolute worst thing here is that  someone decided to reveal the book's big secret way before Woolrich did in the novel -- oh, what a major, crushing disappointment -- I wanted to stop the movie and walk away right then and there.  Yeah, I know...go to any movie review site and this film gets top ratings.  Well, I'm accustomed to swimming upstream.

The movie is beside the point here in a reading journal though, and Phantom Lady is a novel I would certainly recommend.  A lot of people have called it Woolrich's best work, but I can't speak to that since I haven't read much of his stuff; all I know is that I really, really enjoyed this book.