reading in tandem: The Double Indemnity Murder, by Landis MacKellar and A Wild Surge of Guilty Passion, by Ron Hansen 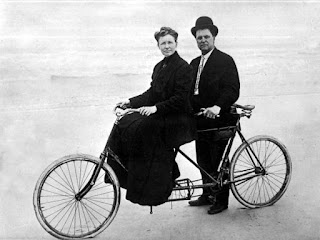 My real-world book group recently read Double Indemnity, by James M. Cain (which, to my surprise,   they didn't care for, leaving me a bit stunned)  and in preparing for the discussion, I learned that Cain's novel had its roots in a real-life crime where double indemnity played a role in a murder.  I love historical true crime done well, and since my little grey cells were tired and needed a thinking break,  I grabbed my copy of  Landis MacKellar's The Double Indemnity Murder: Ruth Snyder, Judd Gray, & New York's Crime of the Century.   Then I discovered that Ron Hansen had written a novel based on the same crime, A Wild Surge of Guilty Passion, so I read that one right after.  The true crime account is worth reading not so much for the crime, but rather for the dynamic duo (she says snarkily) that decided to do away with a husband for $90+ thousand dollars in the 1920s (almost 1.3 million in today's equivalent). 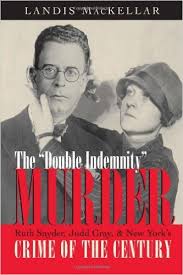 As far as murdering goes, housewife Ruth Snyder and corset salesman Judd Gray (shown here on the cover) were hopelessly inept at their craft.  Snyder latched onto Gray via sex and promises of a happy future together, and cooked up a plan to get rid of her husband Albert.  The long and short of it is that they did it, made it look like Albert was killed during a burglary, but they messed it all up and were caught immediately.  That's when the story really starts. Using transcripts, newspaper accounts, personal narratives and interviews,  MacKellar does a wonderful job here of relating "New York's crime of the century," right up until shortly after both went to the chair.  I was caught up in this story, as I said, not so much for the crime, but because of the people. I ended up feeling sorry for Judd Gray, who was definitely no match for Ruth Snyder; yes, I know he took part in a murder, but still. Had she not come along, I don't know if he'd ever kill anyone; she, on the other hand, was more or less a sociopath in the guise of a perfect housewife who canned peaches.  I think whoever she set her sights on would have been in big trouble.  It does move beyond the crime to examine, among other things,  the press and what reporters would do to keep a big story in the news.

Fictionalizing this story is Ron Hansen, whose A Wild Surge of Guilty Passion also uses the same accounts along with MacKellar's book to tell his version of this tale.  It starts out so nicely, giving readers a Gray who is in ongoing, visible conflict because of his relationship with Ruth Snyder. It also offers a view of Ruth I gleaned from MacKellar's work -- the coldhearted woman who left her kid in a hotel lobby while she and Gray did the do in a room, the would-be killer of her husband who attempted to get rid of him more than once with a series of accidents, waiting for the insurance policy to be processed before she did the real thing.  Had he kept going this route it would have a nearly-perfect novel.  But sadly, after giving us some great insights into Gray and Snyder's characters, 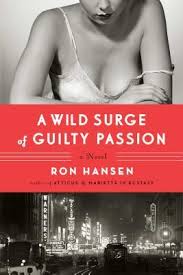 after the murder his book starts to read more like a book of true crime.  Had I not read the nonfiction version first, maybe things would have been better, but I felt like he could have done so much more with this book considering how well he'd  portrayed Gray up to that point.  Judd Gray is definitely the one to watch in all of this,  since the question really is this:  why did this man allow himself to do what he did when everything about him just screams nice guy? It is a topic I find absolutely fascinating, and it's a bit sad that Hansen was traveling this road for a long time, then just sort of let that ball drop.

So taken together in tandem, what we have here is the proverbial mixed bag. The nonfiction account, for people who are interested in historical true crime, is well worth the read not just for the crime, but for the aftermath and a look at the police, the courts, politics, the press, the death penalty, and New York during the jazz age.   Hansen's novel could have been great but in my opinion, the book just sort of loses steam at the end.  Having said that, I'm happy to have read both, and I'd heartily recommend The Double Indemnity Murder,  less so Hansen's book, which was just great up until after the arrests.  And don't expect Double Indemnity, as it seems so many readers did going into the novel.