The Poisoner's Handbook: Murder and the Birth of Forensic Medicine in Jazz Age New York, by Deborah Blum 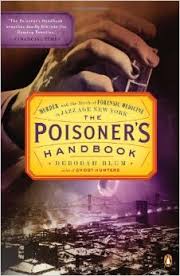 One day I left this book downstairs in the kitchen right next to the coffee maker intending to take it upstairs later,  and the next thing I knew there's a post on my husband's facebook page with a photo of this book that reads as follows:

"Hmmmmm, first she has me get more life insurance - then I see this book.  #‎eatouttonight‬?"

I didn't really ask for more life insurance, but his post is kind of spot on regarding this book -- one of the main points in Blum's study is that for a very long time, people who were so inclined could get away with murder when it came to poisoning.  With very few exceptions, in this period of time there were a wide range of toxic poisons that were basically undetectable, used as a weapon to get rid of unwanted people.  That all starts to change with the advent of serious forensic medicine during the 1920s, especially under the auspices of two major figures:  Dr. Charles Norris, and Dr. Alexander Gettler.  Norris was New York's Chief Medical Examiner, while Gettler was a brilliant toxicologist -- together the two started to change not only the way in which science was used in crime cases, but also the emphasis on how government should work to protect its citizens.  Beyond being just plain interesting, it's also a very good look at politics of the time, at the failures and dangers of Prohibition, and at the unsuspected dangers that lie hidden in some every-day products and how science worked to study them and ultimately lead the fight in making lives safer.

Each section is related under a title heading bearing the name of a poisonous substance.  In each there is a case centered around that specific substance that opens the discussion, then a bit about the history, followed by a bit of scientific info and how scientists came to realize just how very deadly these substances could be. Then it's back to the case and the work of Norris and Gettler in trying to solve the many riddles each case presented, along with warnings to the public based on their findings.  Just as an example, let's take the chapter on Cyanides.  This section whets the reader appetite by starting with two deaths attributed to alcohol but which were in reality caused by poisoning by potassium cyanide.  As the author notes, by the time the true cause was discovered, "the killer, whoever he was, was long gone."  We then move into a bigger, more high-profile case having nothing to do with alcohol, but rather with the deaths of two people in an upscale hotel in Brooklyn.  A man and his wife were discovered dead in their locked room,  and while the ME's office realized it was poison, how exactly they died was a true mystery.  Before getting on with the case, though, Blum gives her readers a brief history of cyanides (there's more than one), the science behind them, and how they work on the human body.  Then we go back to earlier scientific attempts at cyanide detection, Gettler's work and the work of the police in trying to solve this strange crime.   Blum  adds in another earlier case from 1898 to further illustrate how a poisoner had escaped detection and justice, finally following the hotel case to its solution, prosecution and aftermath.  Fascinating stuff, actually, and while I don't even pretend to get the actual science of it all, Blum's brief explanations are enlightening and very interesting to read.

The biggest focus in this book is how science as a tool in bringing killers to justice (and to exonerate the wrongly-charged innocent) began to be taken seriously, especially in the courts where it was previously undermined or derided.  Because of the beliefs espoused by Norris that a medical examiner should take his job seriously, that he or she has a duty to the public and to the course of justice, and that he/she should be a scientist and not an unqualified political appointee who makes money off of dead bodies and granting favors to highly-placed people, forensic medicine and forensic science  in general became a powerful force which is heavily relied on today, nearly a century after Norris & Gettler first got things rolling in this country.   However, beyond that, the author reveals how after Gettler, Norris and a few others took on the science behind some products that people used in their lives on a daily basis and discovered that these things were killing people, one of the most important outcomes was the sharing of their findings with government officials, with hopes that the government would take steps to protect its citizens.   Norris often had to fight not only city hall, but other government agencies whose interests coincided with big business -- for example, in his fight against leaded gasoline and especially against cheap, poisoned alcohol served to the poor during Prohibition.   Sometimes he won and sometimes he wasn't so lucky, but as things turned out, he was right.  One of the most fascinating stories in this book, for example, was about radium -- previously believed to be a substance very good for one's health and bottled in tonics or in "radium water" etc.,   Gettler and another scientist discovered just how very lethal it was and were beyond instrumental in getting these products banned.

One interesting side note re a case I already know something about: Gettler was the guy who proved that Ruth Snyder was lying about her injuries on the night she and Judd Gray killed her husband, ultimately leading to their conviction, imprisonment and electrocution for the murder. And, as it turned out, he also proved that Ruth's husband would have died soon anyway -- ironically, his "brain was sodden with bootleg alcohol," which not only would have been lethal on its own, but also trashed Gray's testimony that Snyder came at him and he had to defend himself.  Snyder was so out of it, Gettler noted, that he "couldn't have even been propped upright to fight."

I first came across this book when one night, I couldn't sleep and decided to watch anything I could find remotely interesting at 2 a.m. and chose an American Experience episode with this title. I was hooked and then discovered that there was a book and that's all it took.  I enjoyed The Poisoner's Handbook -- one thing it did for me was that  it hit home that in some ways a lot has changed (and happily so) since that time but in others, a lot remains the same.  Today, like in the 1920s, many pro-business interests in government continue to represent the interests of corporations at the expense of the people who work in their industries; there are still people who for some reason I do not fathom continue to insist that science is wrong, undermining the work of skilled, brilliant people for some political or financial reasons.  One more thing -- this book takes more of a journalistic approach making it highly accessible to everyone, which is a good thing.  I have only one negative thing to say and that's that each chapter ends in some sort of anecdote which not only adds unnecessary fluff but gets tiresome after a while. A lot of readers might enjoy that, but I'm all about keeping the flow going so I didn't.  But that is just such a nit-picky kind of thing that really did not make my interest flag or prevent me from being absorbed in this book, and I highly recommend it, especially to people who are into historical true crime.