Okay. October's over so it's back to the business of crime: The White Devil, by Dominic Stansberry 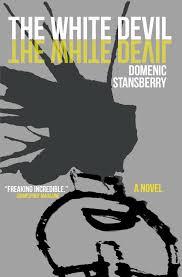 paperback, courtesy of the author - thanks!

"There is no such thing as a secret life."

Domenic Stansberry, you are one clever man. The entire time I was reading this novel, I'm thinking that I'd read something along these lines before and was racking my brain trying to remember where.  Then when I got to the Author's Note at the back, I read this:


then Ah! The light bulb goes off over my head. It wasn't Webster, but Stendhal's Vittoria Accoramboni that I read, a bit different, but based on the same subject matter.  Now I need to look at the play, which was written by the author of Duchess of Malfi. There's nothing like a good Jacobean revenge story.

[One minor point and I'll be going on with this tale -- at Publishers Weekly, whoever reviewed this book  evidently didn't read it very carefully, calling the narrator "unnamed," when in fact she has a name which is mentioned more than a few times.   Hello. Wakey wakey.]

Relating her tale from a second-story flat off the Avenida in Rome, the narrator of this story takes us along with her on a tour of her life up to the present.  Vicky Wilson aka Vittoria, hailing from Texas, has married Frank Paris, a writer whose career has seen better days and whose uncle, Cardinal Whiting, is supporting him. Now in Rome, her brother Johnny introduces her to an Italian senator named Paolo Orsini, whose wife Isabella is a wealthy celebrity, adored by the paparazzi, the tabloids, and the people. It's an instant attraction, and after a few trysts between Vittoria and Orsini, Isabella, who has gone to New York for work, ends up dead. It obviously wasn't Paolo -- he had left New York prior to her death,  but later, after Vittoria's husband Frank meets an untimely end while out horseback riding, followed by the election of a new pope, the situation begins to take a major turn, leaving the fates of several people to spiral out of control as they find themselves stuck, as the author says at different points, "in a kind of limbo."

Aside from the links between corruption, money, power, the influence of the Catholic Church in more secular affairs, the political/legal system, and above all, the often-linked duo of murder and revenge,  what's really interesting here is that this story is told completely from Vicki/Vittoria's point of view, so when we look back at her past, which is very closely linked that of her brother's, things tend to get a bit hazy here and there. Aside from little bits and pieces of her past, we're never quite sure who we're dealing with here.  For example, in one hazy recollection during which she tells us that she'd been to a psychologist at school, she reveals that


"The shrink was concerned about certain blank spots, emptiness, memories I skittered around, dissociative tendencies typical of certain kinds of trauma,"

but aside from a few clues here and there, we don't necessarily have a complete picture of who this rather enigmatic woman really is.  There are a few times where we get the idea that she knows she could have done things differently (If I'd ... this, If I'd ... that), but didn't, because of "certain loyalties" she had. It's those "certain loyalties" that are at the heart of it all, and which drive our narrator,  but I'll leave exactly how for others to discover.   For  me, she is the real draw here, and I think the author does a really nice job detailing her inner turmoil throughout her entire ordeal, right up until the very last moment when she has to face a grave reality.

There's more of course -- the various sources of media -- bloggers, newspapers, and especially the tabloids whose lurid titles spark conspiracy theories -- which keep suspicion floating in the air and a desire for any sort of private life a joke; family ties also play a huge role here, and more.  It's a really good book, and beyond the story itself, I love Mr. Stansberry's  writing voice -- it's refreshingly subdued, never overplayed or overly dramatic but at the same time able to tell a very haunting story.  These days, that's difficult to do, so I don't mind saying that I'm highly impressed.

You can find more about this author (who is no stranger to the crime fiction game) here -- I have to say that I love when something different hits my mailbox and this book is definitely (and most gratefully)  not in the category of same old same old.  Human nature is so bizarre sometimes, and here, its dark side is writ very large.
Posted by NancyO at 11:47 AM